Out of this world: U of T student's SpaceX internship involved working on Falcon Heavy's engines 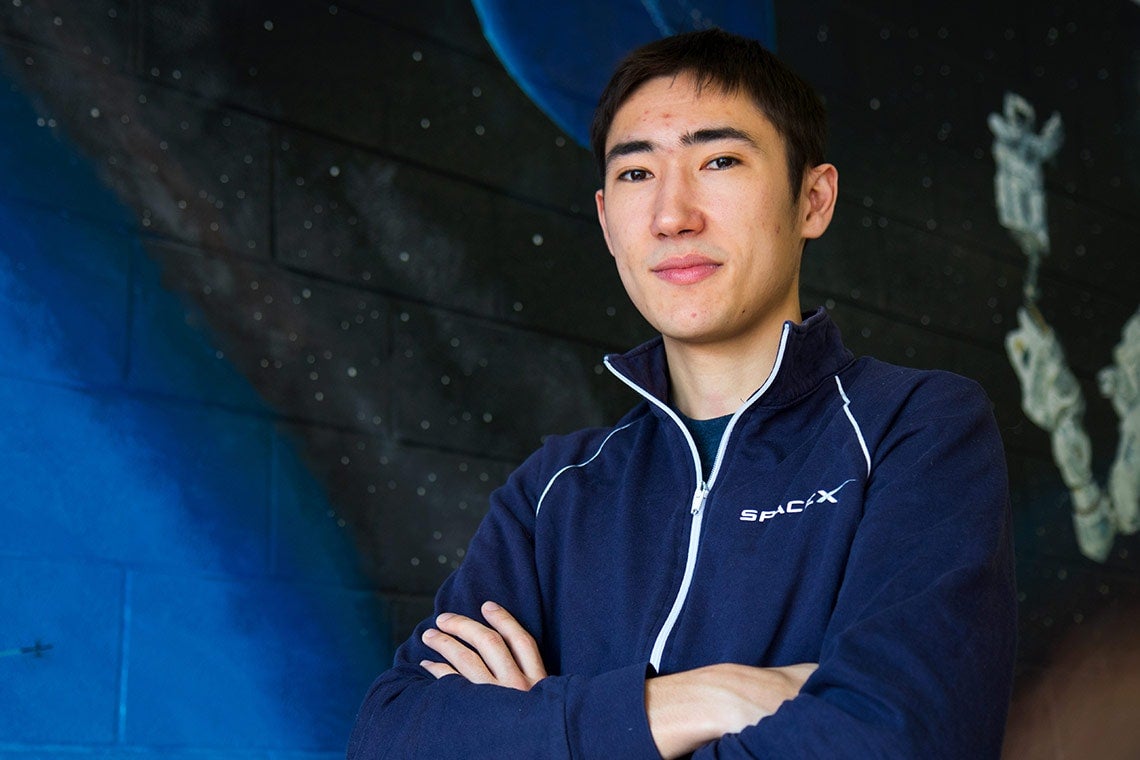 The image is both silly and awe-inspiring: Elon Musk’s midnight cherry-coloured Tesla roadster piloted through space, Earth as a backdrop, by a spacesuit-wearing dummy.

“I was actually surprised they launched the car,” says Askar Kazbekov, a University of Toronto student who is working on a master’s degree in aerospace, aeronautical and astronautical engineering.

Kazbekov, 24, spent nearly a year-and-half working for Hawthorne, Calif.-based SpaceX during two separate internships – one of which was organized through the Faculty of Applied Science & Engineering's professional experience year program. His most recent stint at the space company helmed by Musk came two years ago, when he worked in the propulsion analysis group.

He says the team he was part of focused mainly on engine valves used on SpaceX's Falcon 9 rockets. So he watched nervously earlier this month when the Falcon Heavy – composed of three Falcon 9 engine cores – blasted off from NASA’s Kennedy Space Center in Florida, making it the most powerful rocket to launch in nearly half a century.

“The systems are incredibly complex,” Kazbekov says. “There’s millions of things that could go wrong.”

Now back at the University of Toronto Institute for Aerospace Studies, Kazbekov says his plan is to complete his master’s degree and then move on to a PhD in the field.

His ultimate goal is to play a role in pushing human exploration and understanding of space.

“I would definitely want to see people on another planetary body – other than the moon,” says Kazbekov, who was born in Kazakhstan to parents who are both engineers. It’s a vision championed by Musk, who has repeatedly cited the importance of making humans an “interplanetary” species. The Falcon Heavy “was designed from the outset to carry humans into space and restores the possibility of flying missions with crew to the Moon or Mars,” according to SpaceX’s website.

Musk has also outlined plans to build an even bigger ship called an Interplanetary Transport System that would one day ferry humans and cargo to Mars with the goal of setting up a permanent colony.

Read: Tesla shot into space will likely collide with Earth or Venus – in millions of years: U of T researchers

But getting there requires building a financially viable business around space travel, which is why SpaceX has focused on bringing down the costs of operating a launch vehicle by making its rockets reusable. In addition, SpaceX is soon scheduled to launch two demonstration satellites. The satellites will test the concept of offering space-based broadband internet access, another possible revenue stream to pay for Musk’s more grandiose space plans.

Kazbekov compared working at SpaceX to being at a startup company: full of young, bright employees working incredibly long hours.

He also recounted delivering a presentation on his work in a small conference room when Musk walked in unannounced and took a seat.

“He actually sat in on my review,” Kazbekov says, adding Musk, who is also CEO of electric carmaker Tesla, didn’t ask any questions but made him nervous nonetheless.

“He’s very random. He can slide in at any time.”

What likely wasn’t random, according to Kazbekov, was Musk’s decision to hurtle his old car into orbit around the sun – its speakers blaring David Bowie’s Space Oddity no less – instead of a standard test payload consisting of a giant hunk of metal or concrete block.

If that’s the case, then mission accomplished.