Tesla shot into space will likely collide with Earth or Venus – in millions of years: U of T researchers 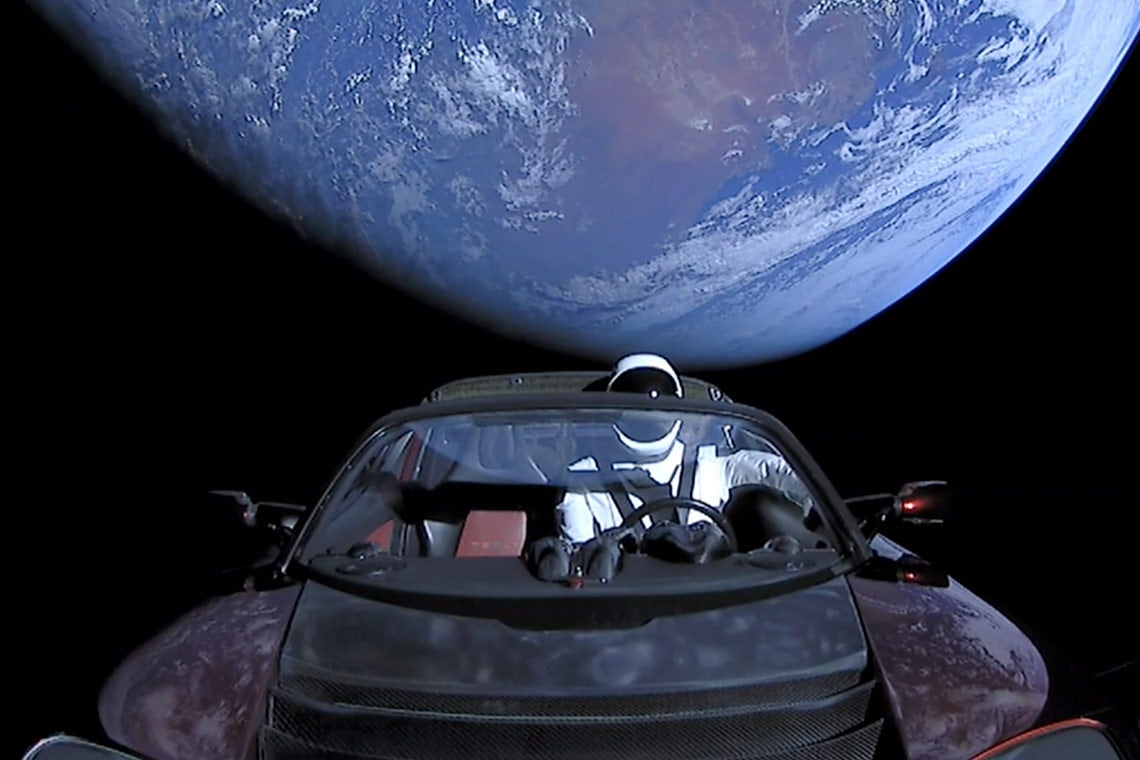 The Tesla Roadster that was recently shot into space as part of SpaceX’s rocket test flight will likely collide with Earth or Venus eventually, according to new University of Toronto research.

“It will likely end up colliding with Earth or Venus, but there’s no need to panic since the probability of that happening even within the next million years is very small,” says the research's author Hanno Rein, an assistant professor of physics at U of T Scarborough and director of the Centre for Planetary Sciences.

The car was sent into space as part of the payload for SpaceX’s Falcon Heavy test flight on Feb. 6. While rocket test flights usually have a dummy payload, SpaceX founder Elon Musk sent up his personal Tesla Roadster instead.

Though it’s mostly a publicity stunt – the car doesn’t have any scientific instruments on board – it’s now classified as a near-earth object, meaning it is catalogued and being tracked by NASA’s Jet Propulsion Laboratory along with other objects that will travel relatively close to Earth.

Read about the research on BBC News

Read about the research on CBC News

What motivated Rein and his team was the question of what will be the car’s long-term fate. After running a series of simulations using sophisticated software that can track the motion of objects in space, they determined the probability of it colliding with Earth and Venus over the next one million years to be six per cent and 2.5 per cent, respectively.

They also determined that the first close encounter the Tesla will have with us will be in 2091, when it will pass within a few hundred thousand kilometres of Earth. The car is currently on a Mars and Earth crossing orbit, meaning it will travel on an elliptical path that repeatedly carries it beyond Mars and then back to Earth’s orbital distance from the sun. How the car's orbit evolves over time will depend a lot on its encounters with Earth, especially how close it will get to Earth since any small change in its trajectory could have a large effect on its orbit.

While the path of the Tesla can be accurately predicted in terms of years, after hundreds of years and many close encounters with Earth it becomes impossible to predict the object’s precise orbit. By studying a large number of orbital simulations, however, the researchers were able to arrive at a statistical distribution of possible outcomes.

Read: Out of this world: U of T student's SpaceX internship involved working on Falcon Heavy's engines

“Each time it passes Earth, the car will get a gravitational kick,” says Dan Tamayo, a postdoctoral fellow at U of T Scarborough who is a co-author on the paper that has yet to be published.

“Depending on the details of these encounters, the Tesla can be kicked onto a wider or smaller orbit, so it’s random. Over time the orbit will undergo what’s called a random walk, similar to the fluctuations we see in the stock market, that will allow it to wander the inner solar system.”

While they only ran simulations for the first three million years of its space journey, Rein says the most likely outcome for the Tesla is for it to crash into Earth or Venus in the next 10 million years or so.

“Although we are not able to tell on which planet the car will ultimately end up, we’re comfortable saying it won’t survive in space for more than a few tens of millions of years,” he says.

While the car’s likely final destination is Earth, they note there’s nothing to fear since much or all of it will likely burn up in the atmosphere.

The research, which received funding from the Natural Sciences and Engineering Research Council of Canada (NSERC), has been submitted for publication. A preprint of the paper is available online.