Nuit Blanche Toronto comes to U of T, Queen's Park for exhibition by Art Museum curator 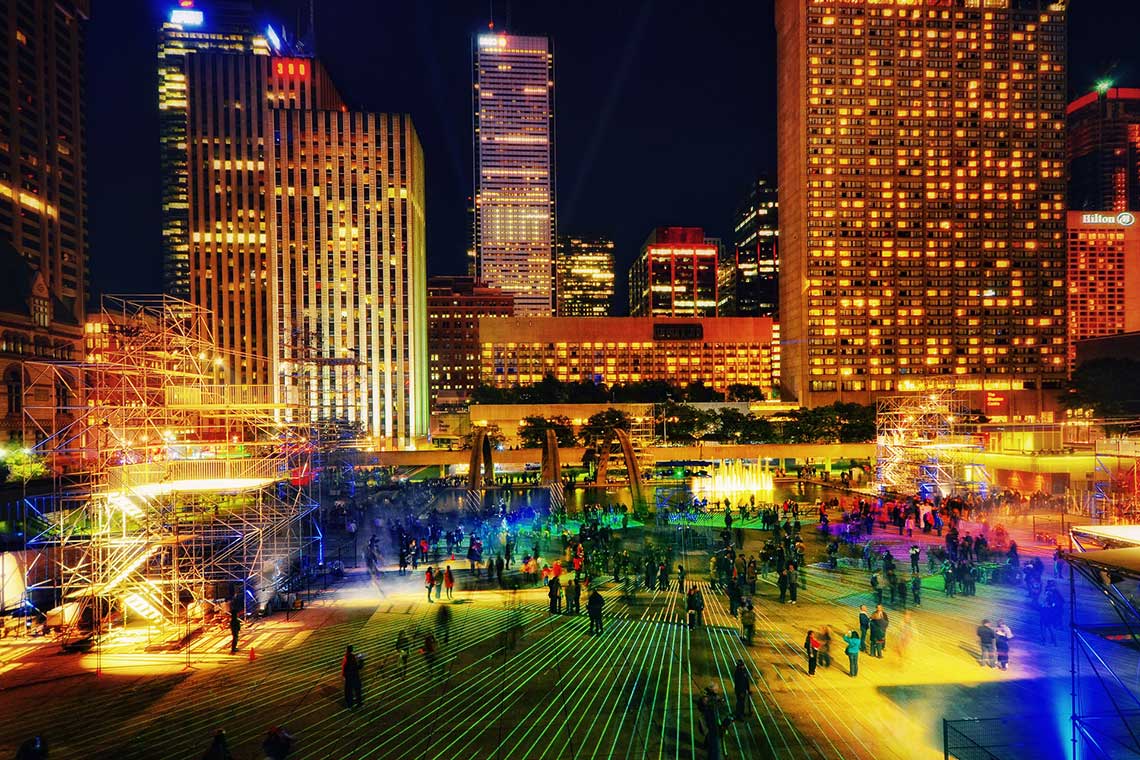 “Art can speak to ... what the city means to us through a lens that is informed by different histories but also different futures”

As the sun sets tomorrow, thousands of people will be bundling up and heading to downtown Toronto for the all-night art festival Nuit Blanche.

Inspired by the vibrancy of Toronto’s streets and gathering places, Barbara Fischer, executive director and chief curator of the University of Toronto’s Art Museum, has curated a Nuit Blanche exhibition called Taking to the Streets, with eight installations around Queen's Park and U of T’s downtown Toronto campus.

“There's an incredible celebratory aspect to Nuit Blanche, with so many people interested and curious about encountering something that surprises them, where people seem to really enjoy seeing things they're not familiar with,” says Fischer.

Approaching Queen's Park, you’ll hear the bass from a group of souped-up cars blasting music for the Automobile installation. At the park’s College Street border, join artists and activists for Won’t Back Down, a commemoration of a Black Lives Matter protest march in 2016. Head to the U of T's Medical Sciences building for a different perspective on how police and passive protesters clash,  with Holding Still // Holding Together, and have a rest while voices sing to you in unison in the Faculty of Music building for Dream Variations.

Explore all of the Taking to the Streets installations

U of T News spoke with Fischer about the festival and why it’s important to showcase art in the city.

What's the message behind Taking to the Streets?

The idea is to look at what brings us into the street, but beyond the pragmatic there's the idea that the streets are where we celebrate in collective ways – where the city could be collectively somehow – whether it's Pride days or Caribana. But it's also a site of protest and constant negotiation of public space and the presentation of concerns that are collective in particular.

I wanted to pick that up and draw it out through the Nuit Blanche festival and through curating a section this year.

Queen's Park – the venue for many of these installations – has been the site of many of those celebrations and protests. Was that a deliberate choice?

Queen's Park was the magnet – it's resonant with these histories. It's the focal point in the city for people speaking to power or making themselves heard and seen.

What is the role of a large-scale art festival like Nuit Blanche for advancing the city's cultural scene and providing public access to the arts?

It's an event which is so open, anyone can come and enter into it. I think there's a sense that you don't need to know a lot about art to be able to participate and enjoy the surprises that greet you along the way. Nuit Blanche has become a particularly successful way for people who want to experience something different and new, and see the contemporary art as a way of opening up new worlds and different perspectives, whether at a physical, a sensory or conceptual level. I think that is part of what art can do.

I think art can speak to particular places, to what the city means to us, through a lens that is informed by different histories, but also different futures. Artists sometimes project a way out, towards a different way of being together, whether socially or collectively or individually.

It encourages us to think about what is important about a city and what we want a city to be, and how we imagine our lives to be in a city. Artists can contribute to that in very interesting, thought-provoking, stimulating and also sensuous ways.