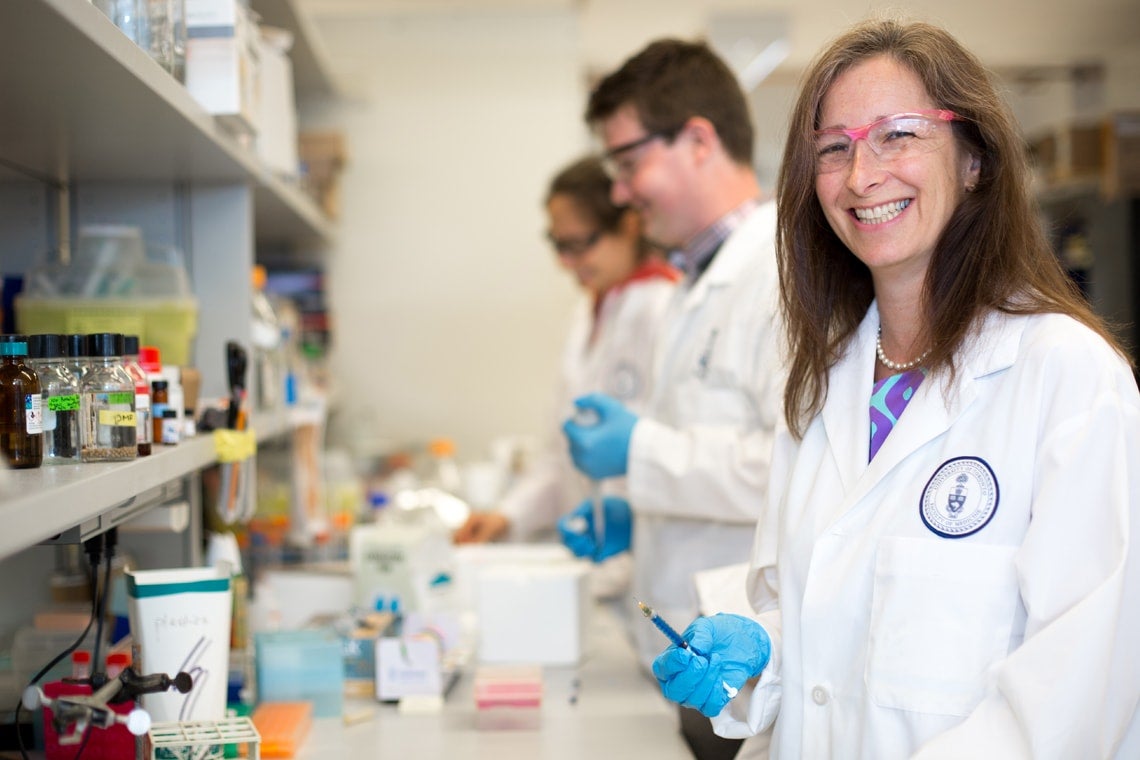 University Professor Molly Shoichet, a world-renowned researcher and leader in the use of biomaterials to enhance stem-cell delivery for treating disease conditions from stroke to blindness, is the recipient of the 2016 Till & McCulloch Award.

Shoichet is a professor in the department of chemical engineering and applied chemistry and the Institute of Biomaterials & Biomedical Engineering at the University of Toronto. The Canada Research Chair in Tissue Engineering, she is a leader in the use of biomaterials to enhance cell delivery and to guide stem cell fate for tissue engineering. She is also a principal investigator in Medicine by Design, a leading regenerative medicine initiative at U of T that is designing and manufacturing cells, tissues and organs that can be used in research, drug discovery and clinical treatments.

Her 2015 paper, published in the journal Stem Cell Reports, demonstrated that the research team’s Jello-like hyaluronic acid-based injectable hydrogel helped transplanted stem cells survive, integrate and repair damaged tissue in the brain and eye. The research involved taking photoreceptor cells derived from stem cells, encapsulating them in the hydrogel and injecting them into the retinas of blind mice. Vision was restored by approximately 15 per cent.

“Dr. Shoichet, an expert in polymers to advance our understanding of drug delivery and regeneration to promote healing in the body, has made numerous significant contributions to the field of regenerative medicine,” says University Professor Peter Zandstra (IBBME), executive director of Medicine by Design, chief scientific officer of Centre for Commercialization of Regenerative Medicine and a member of the selection committee. “This paper demonstrates that specific interactions between the cells and HA support their survival, migration and integration in animal models of retinal degeneration. The selection committee was impressed with the paper because it offers solutions to the cell delivery problem in neural disease. Importantly, the same material also has a pro-survival effect in a separate animal model of stroke, suggesting broad potential applicability of the strategy.”

“While clinical trials in humans are years away, this work is clearly moving in that direction,” says Dr. Michael Rudnicki, Scientific Director of the Stem Cell Network and the 2014 Till & McCulloch Award winner. “Diseases like age-related macular degeneration and stroke don’t yet have cures and today’s medicines only slow the progression of these diseases. Stem cell-based therapies, however, have the potential to outright stop the disease progression and, in the case of blindness, reverse it.”

“It is a thrill and an honour to give a lecture that salutes the incredibly important and pioneering research of Drs. Till and McCulloch,” says Shoichet. “I am humbled to be receiving this award that has been won in previous years by superbly talented, internationally renowned stem cell scientists. I am very grateful and look forward to sharing our research with everyone in beautiful British Columbia.”

Shoichet will accept the award, named after James Till and Ernest McCulloch, and present a lecture during a special session at the Till & McCulloch Meetings, Canada’s premier stem cell event. The Till & McCulloch Award lecture will take place in Whistler, BC on Tuesday, Oct. 25, 2016.

The Stem Cell Network established the Till & McCulloch Award in honour of the two Canadian doctors whose pioneering work established the field of stem cell research. The Till & McCulloch Award is presented each year to one researcher in Canada who is nominated through a public process. The Adjudication Committee chooses the awardee based on what is determined to be the year’s most influential peer-reviewed article by a stem cell researcher based in Canada. The Till & McCulloch Meetings are hosted by CCRM, the Stem Cell Network and the Ontario Institute for Regenerative Medicine.