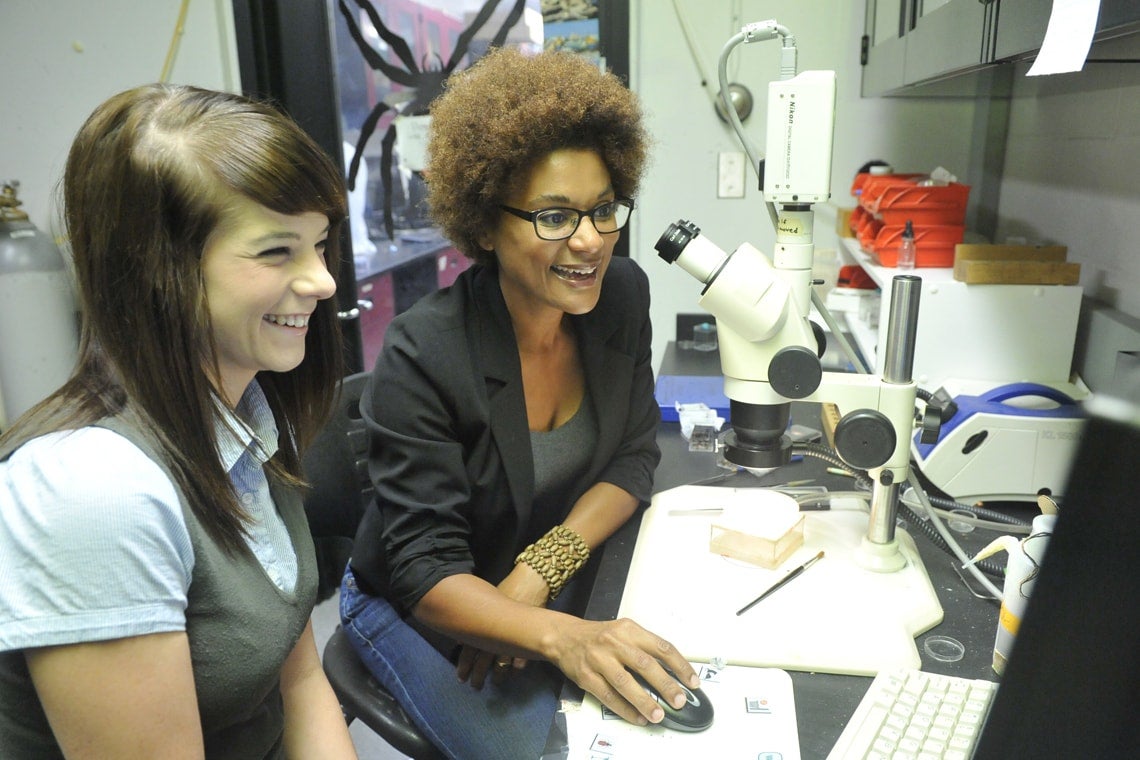 Professor Maydianne Andrade is meticulous in her research on the mating habits of cannibalistic spiders. Like any renowned scientist, she lets the data do the talking.

In her new role as U of T Scarborough's vice-dean, faculty affairs & equity, she plans on doing much of the same. Her plan is to take a data driven approach to figuring out ways U of T Scarborough can do a better job in hiring, developing and promoting its faculty while also ensuring these processes maximize transparency and minimize the unintended effects of unconscious bias.

Andrade, who began her new role on Jan. 1 spoke to U of T's Don Campbell about being a black woman in academia, her priorities, and what she’s looking forward to most in the new position.

Read about U of T's efforts on gender and racial equity

You’ve already had a distinguished career as a researcher, but what attracted you to this role in particular?

From the first day I walked into my office as a new faculty member, being a black woman in this position meant I was unusual.

I was asked many times to give talks about being a woman and visible minority in academia, as well as about equity and diversity. I always said no because I felt it wasn’t in my area of expertise. As I advanced in my career that changed, especially after becoming a Canada Research Chair. It became clear to me that although people are trying to change things for the better, change is happening very slowly, if at all. I became very interested in the literature on challenges to equity and representation.

Read about her research

From reading the literature I was surprised at the magnitude of the effect of unconscious bias on our ability to judge each other fairly. I had heard about bias before, but usually in a descriptive way and with a focus on the individual experiences of those who are directly affected. It is important to understand this perspective, but I think it’s important for people to also understand that the overall effect is measurable, serious and can have a significant effect on how our institutions function.

About six years ago, I started saying yes and began giving talks about just how strong these effects are, and how they can manifest in our everyday working lives. I have found people surprisingly receptive. It’s like bias was the elephant in the room. Once it’s named – and it’s clear that we all have biases – the focus can shift to one that is proactive and positive.

Hear her talk about unconscious bias

What will this new role entail?

I will be helping with the mechanistic aspects of faculty hiring and promotion. This will include overseeing procedural aspects of faculty searches, appointments, tenure and promotion but also providing tools that will help with these processes. The more innovative side is fostering development opportunities for our faculty. This will start with recruitment – working to broaden our applicant pools, making it clear why UTSC is a fantastic place to be and ensuring that people have the right mentorship and support once they are here. Much of this will need to be data-driven so I will need to get a complete picture of our faculty, the challenges and aspirations they have and what barriers they may face in career advancement.

The role also supports UTSC’s aspiration to increase the diversity of people working here and making sure there’s a climate that they are happy to work in and where they will flourish. Achieving this will require taking some lessons from the literature on unconscious bias and ensuring our search and promotion procedures are fair and equitable.

Even though we tend to focus on race and gender, clearly there is a wider range of diversity that we wish to have represented here. Unfortunately, there may be a similar diversity of unrecognized biases that cannot be anticipated. The key then is to ensure fair, transparent processes and that everyone understands that this goal is at the heart of the procedures we follow.

What will be your first priorities?

First of all, I hope to develop pragmatic tools that will help departments in a discipline-specific way to increase the diversity of applicants they are considering. I will also provide the information needed to make it easier to hold a transparent search that avoids unintended biases.

Second, I really want to tackle mentorship and support for all faculty who are already here.

There is considerable data showing that mentorship can increase career satisfaction, productivity, and progress. While most departments at UTSC have some sort of mentorship policy, all may not be effective. On top of that, Professor Myrna Simpson proposed an idea that I really like and that is creating a cross-discipline mentorship network. Sometimes, someone from another department at a slightly more advanced career stage can offer great advice. This effort will start by inviting faculty to tell me what they think would be most effective and working from there.

What are you most looking forward to in this role?

I think the potential to make real and positive change. I’m really looking forward to meeting with different departments and getting to know their cultures. I want to visit them as soon as possible now that the new term has started. I need to know about their plans, their expectations and challenges.

Although I know UTSC and the larger university culture very well, I do feel like I exist in a bubble in terms of research and teaching aspirations. I spend a lot of time with my students and we all like spiders (laughs), or I spend a lot of time with other biologists, who are also a unique lot (laughs again). It will no doubt be a learning experience. I don’t expect to get it right all the time right away, but I promise to learn from the process and from those I meet. I’m looking forward to making connections and seeing how I can shape structures that will help.

There have been notable examples recently of misogyny, racism, and homophobia in North America. There’s also been a bit of a mainstream backlash against the perceived overreach of political correctness. How do you view your role given the current climate?

I would say that is part of the reason I was interested in the role. I think giving prominence to equity is important in the current climate.  In academia, we really do live in a bubble, but even within this bubble, there are challenges to equity coming from a variety of directions.

I think we need to emphasize fairness, particularly at a time when more people are finding it easier to say they don’t support fairness in society. Certain people have been open about saying certain groups can and should be excluded from being treated fairly. We need to be equally firm in asserting our core values. I use bullying as an example. Now it’s widely regarded as abhorrent and rightly so. But when I was younger, bullies were common at school and hardly spoken about negatively. In one generation it has become totally unacceptable.

Unfortunately, that goes both ways. If we don’t find some way to adjust the conversation, I’m afraid the ugliness we’re seeing now will only get worse.

What do like most about working at the university?

Since I started here it’s the only place I’ve ever wanted to be. The university is an amazing place.

The students at UTSC are spectacular. They’re interested. They come from diverse backgrounds, are respectful of others, and on the whole I feel we’re respectful to them in return, even while challenging them to think about things in new ways. I truly believe we’re a community that is more interested in meeting and talking out differences rather than fighting. I think UTSC can make positive changes, and not just these end points, but the process in getting there can be positive as well.