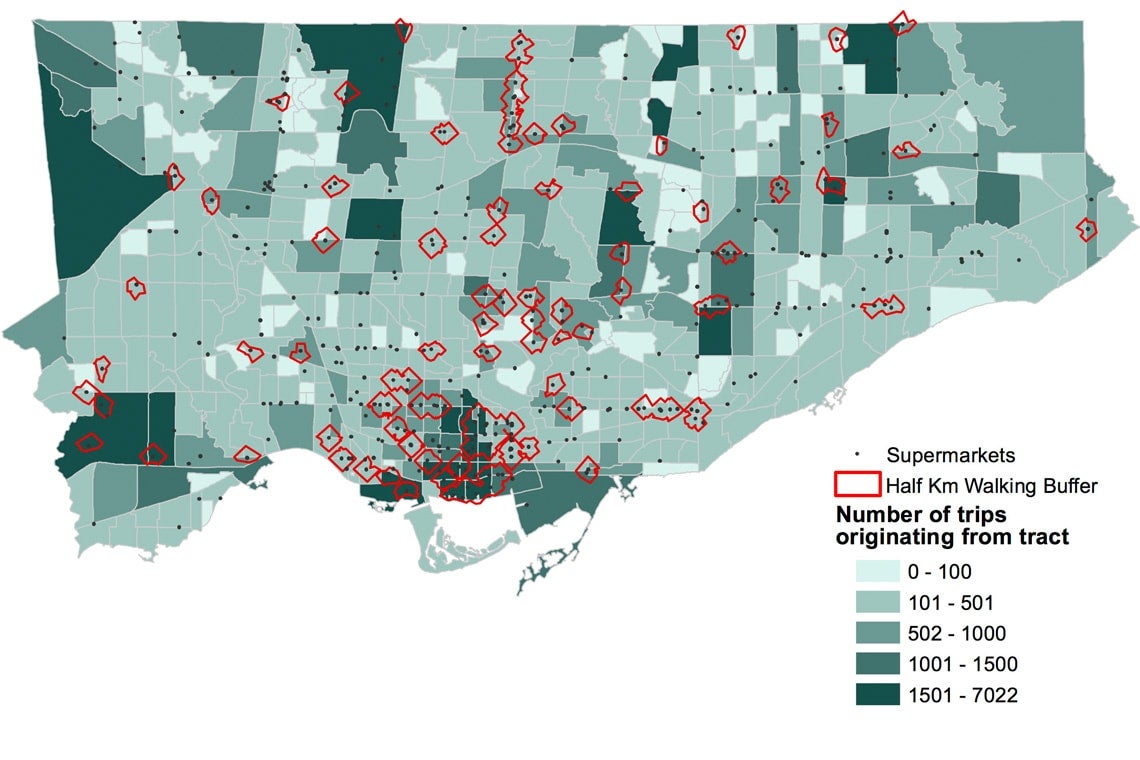 This map of Toronto, created by Michael Widener, shows the parts of Toronto that see a lot of activity between 10pm and 2am (the dark green areas) but where few supermarkets are open (black dots).

Read part one: how transit can fix access to jobs

Read part two: what Toronto's waterways can tell us

In the fourth instalment, U of T News writer Romi Levine profiles the work of Michael Widener.

The relationship between where we live and what we eat is complicated, says Michael Widener.

The assistant professor of geography and planning at University of Toronto wants to debunk conventional wisdom about what is commonly called a “food desert” – neighbourhoods where there is limited access to healthy food. People who live in these “deserts” are thought to adopt unhealthy eating habits and will go on to have health problems associated with their diet.

“There are a number of problems that logic,” says Widener. “People don’t just sit in their homes all day. They move around the city – they go to work, they visit their family, they pick up their kids. They do all sorts of things, so representing a food desert as this simple spatial concept really isn’t all that accurate.”

Widener is working on a project for Toronto Public Health, highlighting some of the other factors that create access barriers between people and healthy food.

“What does the food accessibility landscape look like for people who are maybe not conventional shoppers?”

That’s what Widener is exploring, particularly regarding people who work irregular hours.

“There isn’t good availability for shift workers,” Widner says. “In particular for people who have a lot of time pressure – people who are working late at night, working two jobs – the ability to shop healthfully is even more difficult.”

Widener created a series of maps that look at access to healthy food at different times of the day. He found that very few healthy food retailers are open late at night, even in areas where there’s a lot of late-night activity (shown in dark green on the map).

Data for the maps were taken from the Transportation Tomorrow Survey – conducted by U of T’s Data Management Group.

These maps are a work in progress. The next phase of the project is set to tell a more detailed story about food access in Toronto – incorporating demographic data, information about people’s transportation habits, costs and daily routines.

He says this information would have been much harder to gather in the past.

“We’re getting more and more individual level data so we’re able to look at, in very high resolution, how people move around the city, whereas maybe 10 years ago we didn’t have that good of information.”