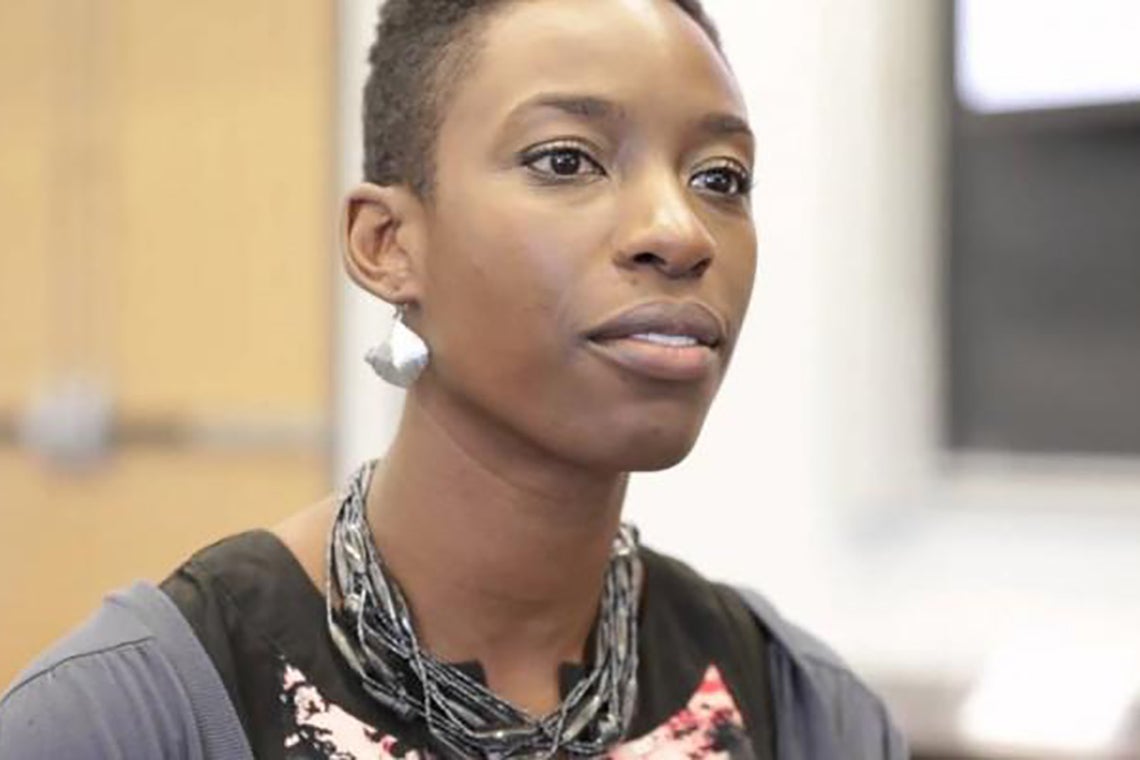 Janelle Joseph, who was recently appointed an assistant professor at U of T's Faculty of Kinesiology & Physical Education, teaches a class on race, Indigeneity and physical culture (photo courtesy of KPE)

For a long time, Janelle Joseph didn’t consider becoming a professor because she didn't see many racialized people who were faculty members at Canadian universities.

“I hadn’t really considered that before because there were almost no racialized professors in my entire undergraduate career,” she says. “I didn’t see myself represented in the professoriate.”

Fast forward to today and Joseph has taken on a new role as an assistant professor at the University of Toronto’s Faculty of Kinesiology & Physical Education. She teaches a class on race, Indigeneity and physical culture, and aims to break down barriers for her students.

“One of the fundamental questions that drives me forward is: How do we open doors, how do we allow all people to see themselves represented in leadership, in the professoriate, in the community?

“Many of my students have never had a Black professor before, so being at the front of the classroom has really been a privilege, knowing that I am changing perspectives and lives with my research and my presence and leadership.”

Joseph traces her interest in the sociology of sport to her childhood. Her father was an elite cricket player in his native Antigua, and her brother, Jamaal, signed with the Florida Marlins (now the Miami Marlins).

Her fascination with gender, race and movement cultures grew as an undergraduate studying kinesiology at Western University. On an exchange to Victoria University in Melbourne, she met Chris Hallinan, a scholar of Indigenous studies and sport. He encouraged her to consider becoming a professor – and to study with some of the leading experts in sport sociology, including U of T’s Bruce Kidd and Peter Donnelly.

She did just that. She obtained a master’s in exercise science at KPE, working under Donnelly’s supervision on a project about cultural authenticity in martial arts. (She took an interest in the Brazilian martial art capoeira while in Australia.)

“It was a really rich opportunity to be able to have conversations with people like Bruce Kidd, who was the dean at the time and had such a wealth of not only scholarly knowledge, but of personal connections and experiences,” she says. “You’d show up in his office and he’d pull out a book and say, ‘Here, read this.’”

She found the experience so enriching, she decided to pursue a PhD in exercise science in the same department and with the same supervisor. This time she worked on a transnational project involving cricket and the Caribbean diaspora. She published a book on the subject in 2017.

Near the end of her PhD studies, Joseph noticed a gap in the undergraduate curriculum – one that she might be able to fill.

“We had a course on adapted physical activity, we had a course on gender and health, but there was nothing on multiculturalism, race, diaspora, globalization, transnationalism, cultural authenticity … all the subjects that I was so passionate about,” she says.

Many students in the classes where she was a teaching assistant appeared interested in these ideas as well, she recalls. Those familiar with her research would ask her questions about these subjects after class. “For the most part, those were racialized students in our faculty and it was important for them to be represented in the curriculum and learn about critical race theory,” she says. “But I think it’s important for all students, regardless of their family history or personal experience, to have a deeper understanding of these issues.”

She developed a course called Race and Sport in Canadian Society, which explored critical race theory and multiculturalism.

She later took a break from teaching to complete two post-docs, one at New Zealand’s University of Otago, researching multiculturalism and capoeira, and the other at the Ontario Tech University, exploring Afro-centric physical education. But she ultimately returned to Toronto be closer to her family and resumed teaching at KPE.

At the same time, Joseph became a learning strategist at U of T’s Student Life and later its director of academic success. In 2017, she became assistant director of U of T’s Transitional Year Program (TYP), a bridging program for adults to acquire qualifications for university.

“I had an academic understanding of access and equity, but being at TYP really deepened my understanding of all the barriers that exist at universities that make it so difficult for some students to achieve success,” Joseph says.

She believes those jobs helped her understand students’ needs and how she can contribute to physical cultural studies.

The significance of Joseph’s course was reinforced by the findings of KPE’s task force on race and Indigeneity, which was inspired by the Truth and Reconciliation Commission. The expert panel’s recommendations included developing a course on “Indigenous issues/history, colonial history, equity, racialization and racism in the context of sport and physical activity” – one based on or complementing Joseph’s work.

Joseph, then a sessional instructor, successfully applied for a full-time tenure-track position.

Her current course focuses on representation and exposure of racialized and Indigenous athletes, who are an often-neglected part of the Canadian sporting story. Another aspect of the course looks at the barriers and discrimination these athletes face.

Joseph says she wants all her students – no matter their ambitions after university – to learn about the inequities facing people of different backgrounds.

“Regardless of what field they’re in, they all deserve to understand where people of different backgrounds are coming from and have an awareness of how they might contribute to changing the structures that are preventing full participation right now.”