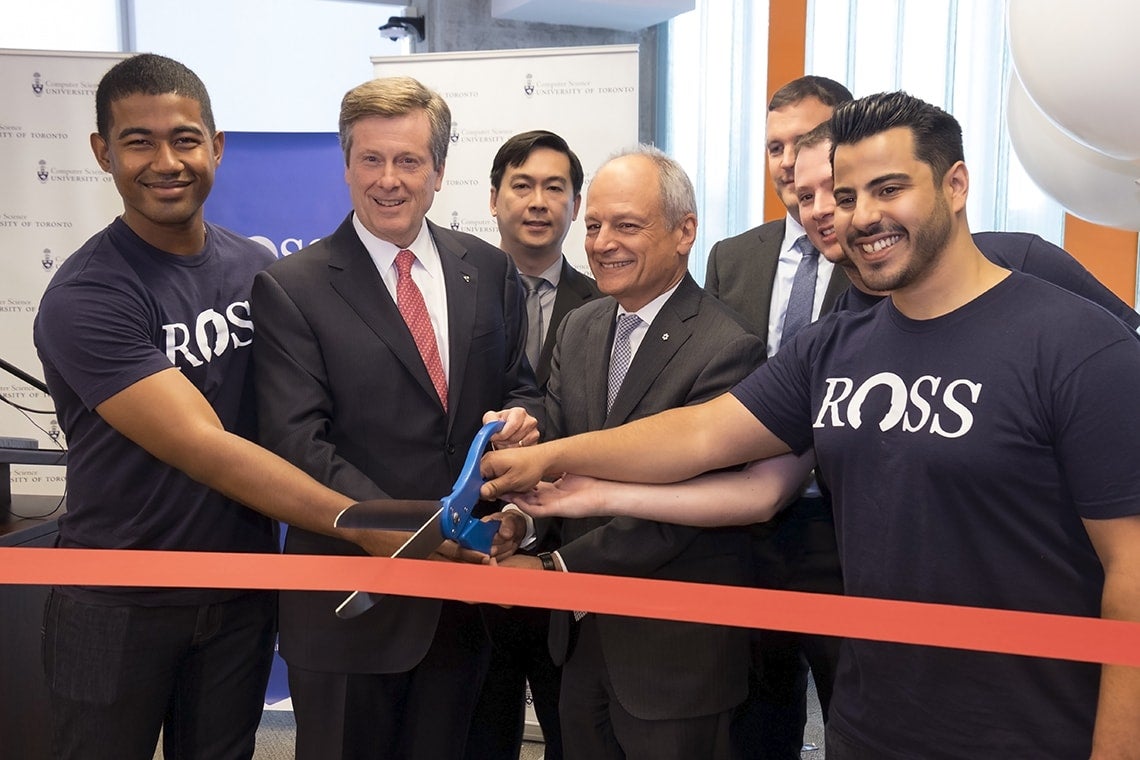 Every great tech startup has its hard luck origin story. Apple co-founders Steve Jobs and Steve Wozniak worked out of a garage. Mark Zuckerberg toiled on a Facebook predecessor in his Harvard dorm room – and was nearly expelled for his troubles.

On Monday, the co-founders behind University of Toronto startup ROSS Intelligence, which uses artificial intelligence to make legal research easier, shared their recollections of the company's early days coding with fingerless gloves in a freezing basement suite.

“One of the first purchases we made was a heater because it was one of the coldest winters Toronto had ever had,” Andrew Arruda told a crowd of about 100 people gathered on the third floor of U of T's Bahen Centre for Information Technology, where the ROSS concept was born in 2014.

“This attitude of scrappiness and making do with what we had stayed with us throughout this journey.”

That journey led ROSS to Silicon Valley and now back to Toronto with the official launch of ROSS North, an AI-focused research and development lab. Arruda and fellow co-founders Jimoh Ovbiagele and Pargles Dall’Oglio shared the stage Monday with Toronto Mayor John Tory and U of T President Meric Gertler for the official ribbon-cutting cermony.

Arruda said the company always planned to re-establish a presence in Toronto because of the need to be close to the cutting-edge artificial intelligence research being done at U of T.

“Our move to California meant, yes, we would not have to shovel snow in the winter,” he said. “But it would be taking us away from the epicentre of artificial intelligence development and this had to be remedied as soon as possible.

“With our AI R&D headquarters in Toronto, a world of possibilities is open to us when it comes to ensuring the best and brightest engineers continue to join the ROSS team.”

ROSS uses AI technology to make the tedious process of combing legal databases faster and more efficient. Lawyers can even ask ROSS questions as though they were talking to a colleague, dispensing with the usual keyword searches and Boolean queries.

The company’s software is available in every major legal hub in the United States and is being used by lawyers working at Fortune 500 companies, small law firms, solo practitioners, government agencies and by some of the world’s biggest and most profitable law firms, Arruda said.

Before grasping an oversized pair of scissors, Tory reflected on his early years as a lawyer, and as an articling student in particular, in an effort to explain the potential impact ROSS could have on the US$600-billion global legal services market.

“I’m enough of a fossil, in terms of my age, to remember going into the law library, bringing out a huge stack of 12 to 15 books and pouring over them trying to find that one phrase or bit of reasoning that would establish a precedent,” he said, noting that such tedious research was often an ineffective use of lawyers' time and clients' money.

Tory added that Toronto has much to offer cutting-edge technology firms so it should be no surprise that, like ROSS, more of them are choosing to set up shop here.

“I think the principal reason we have more of the best, brightest coming here is because there’s a recognition of the massive pool of talent, especially in artificial intelligence, and of diverse talent,” he said. “I’ve had companies say there’s no other place on Earth where they can find such smart people from such diverse backgrounds to help them do their business internationally.” Thanks to the work of pioneers like U of T’s Geoffrey Hinton, the university and the city that surrounds it have emerged as a research hub in the AI fields of machine learning and deep learning, which uses complex algorithms to mimic the way the human brain learns. The technologies have already attracted the interest of such tech giants as Google, Facebook and Amazon, and are also being adopted by a variety of other industries, from medicine to finance.

“Toronto has emerged as a global hub in the AI revolution – a phenomenon that was confirmed most dramatically a few months ago with the creation of the Vector Institute,” said Gertler, U of T’s president, referring to the creation of an AI-focused research institute that was launched earlier this year as a partnership between Ottawa, the province, U of T and industry.

A few months later, ride-sharing company Uber said it was launching a driverless car R&D lab in Toronto and was tapping Raquel Urtasun, an associate professor of computer science at U of T, to lead it.

“These developments, while impressive, are no mystery,” Gertler continued. “They’re a clear example of how long-term, public support for investigator-led, curiosity-driven research expands our knowledge of the world and also expands our ability to change the world for the better.”

The idea for ROSS was developed through a course-based project after U of T’s computer science researchers were selected to participate in a competition to find novel applications for IBM’s Watson cognitive computing platform. U of T was the only Canadian school invited to participate.

Khai Truong, an associate professor in U of T’s department of computer science, said the work that led to ROSS was “more than just a course project in cognitive computing and business of software – it was an endeavour.”

The work involved several faculty members as well as Helen Kontozopoulos and Mario Grech, the co-founders of the Department of Computer Science Innovation Lab, one of 10 on-campus accelerators.

ROSS ended up taking second place in the competition and later moved to Silicon Valley to participate in the Y Combinator accelerator program. ROSS can also claim credit for helping inspire the launch of Blue J Legal, another U of T legal startup. Benjamin Alarie, a professor at U of T's Faculty of Law, said he got the idea for the company, which applies AI to tax law research, after sitting on one of the panels for the U of T portion of the IBM competition.

Now, with the launch of ROSS North, Arruda says the company intends to embark on a growth trajectory that will eventually employ hundreds in Toronto.

“The launch of ROSS is one of the most important moments in our company’s history,” Arruda said. “Being back in Toronto, the hub of artificial intelligence, feels very good and feels right.”