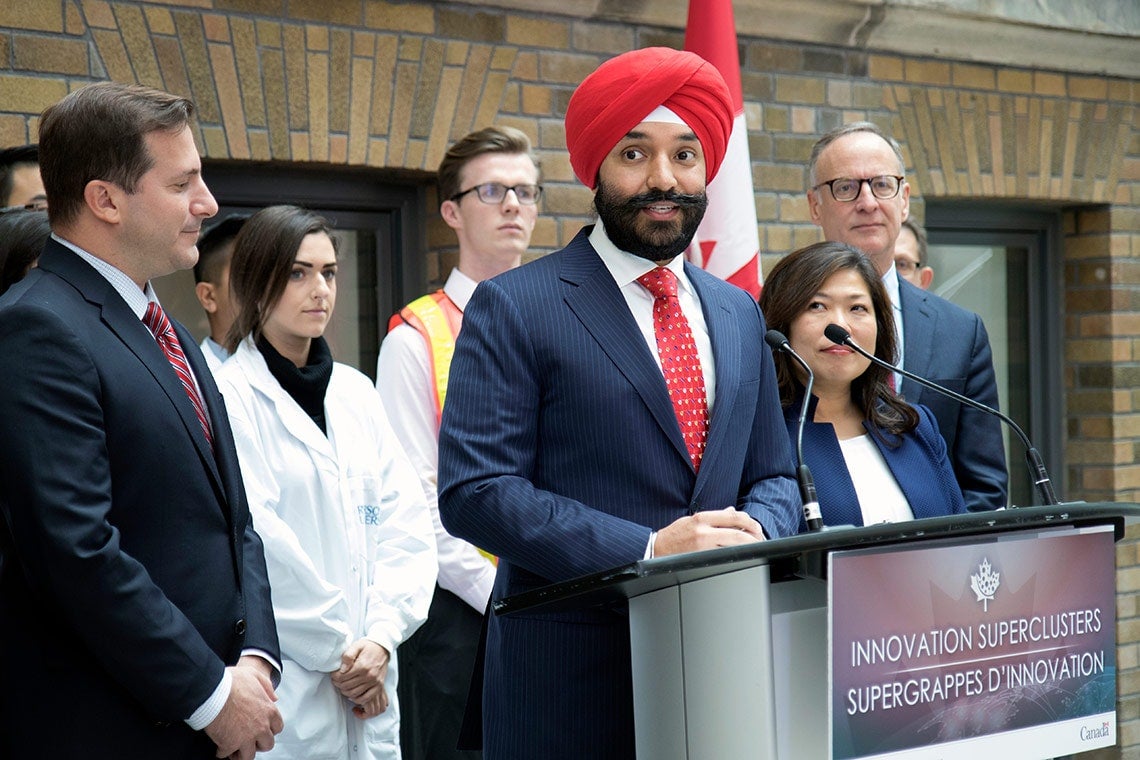 Innovation Minister Navdeep Bains was in Toronto Wednesday to officially announce two more shortlisted candidates for the federal government’s $950-million supercluster program – one focused on advanced manufacturing in Ontario and another targeting the province’s mining sector.

The announcement, made at the MaRS Discovery District, was the latest stop on Bains’s cross-country tour to announce the nine proposals Ottawa selected from over 50 submissions to be on its short list. Up to five will ultimately receive federal funding.

Bains said the Ontario mining supercluster proposal would tackle global energy and environmental challenges in a bid to transform the sector into a global leader in clean resources and technologies, as well as responsible sourcing of metals.

“Canadian manufacturers are delivering the best of what the world wants in sectors as diverse as transportation, consumer goods and life sciences.”

Part of its broader innovation strategy, Ottawa’s supercluster initiative seeks to strengthen the country’s most promising clusters – collections of companies, academic and research institutions and other innovation actors – by investing up to $950 million by 2022 in highly innovative industries where Canadian companies have a chance to emerge as global leaders.

The University of Toronto, the country’s top-ranked university and a major player in the Toronto-Waterloo corridor’s existing technology and commercialization cluster, is a supporter of several of the proposed superclusters.

“We applaud the federal government’s commitment to driving innovation in the Canadian economy through its supercluster program,” said Vivek Goel, U of T’s vice-president of research and innovation.

“One of the best ways for Canada to remain globally competitive is to marry the deep research expertise of post-secondary institutions with industry and other innovation players.”

Read Goel's op-ed on superclusters in the Hill Times

In the coming days, Bains and Public Safety Minister Ralph Goodale are also expected to announce two agriculture-focused superclusters on the Prairies, an infrastructure supercluster in Alberta and a digital technology supercluster in B.C. Tony Chahine, the CEO of smart textile firm Myant, is one of the industry backers of Ontario’s advanced manufacturing proposal. He said his company has worked closely with several researchers from U of T and the University Health Network, including Professor Milos Popovic of Toronto Rehab, to integrate sensor and computer technology into garments that can track heart rates, breathing rates and hydration.

Chahine was blunt when asked why it was important for Myant to support the advanced manufacturing supercluster proposal in Ontario.

“Unless you make it, you will never innovate,” he said.