'I'm energized by the passion on this campus,' new principal of U of T Scarborough says 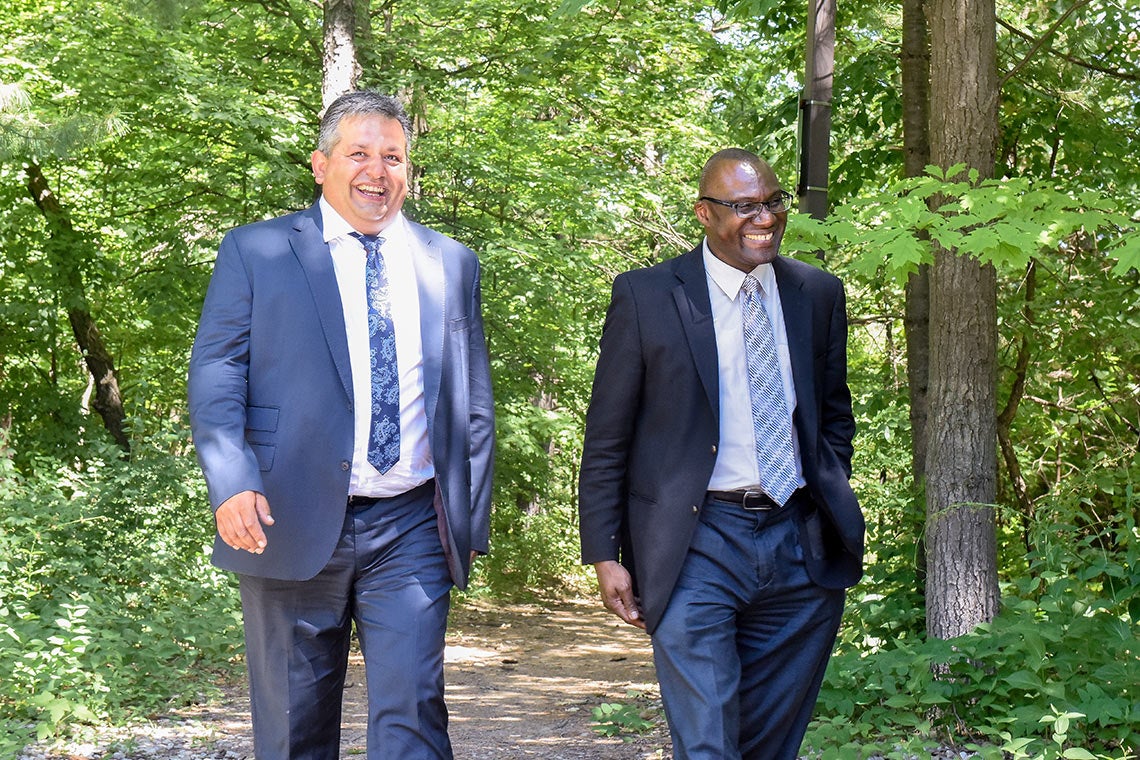 Wisdom Tettey (right), who officially became vice-president and principal of the University of Toronto Scarborough this week, takes a tour of the campus with Andrew Arifuzzaman, chief administrative officer (photo by Ken Jones)

As Wisdom Tettey officially becomes vice-president and principal of the University of Toronto Scarborough this week, he’s got a busy summer ahead of him.

“It’s going to be exciting but hectic,” says Tettey, adding that he's looking forward to his new role.

“I’m energized by the passion on this campus about making a significant impact in the community. There is a commitment to cultivating global citizens whose devotion to advancing society extends beyond the local into the global.”

But first there’s a lot for Tettey to work out. Finding a new home, working out school for the kids, getting up to speed with his new job – all while wrapping up his obligations at the Okanagan campus of the University of British Columbia, where Tettey was the dean of arts and sciences.

“I still have some scholarly commitments that I have to come through on,” Tettey says.

And he’s going to try to squeeze in a quick vacation with his family – he has a 15-year-old and 9-year-old twins – “just to get a little breather and come back rejuvenated and energized to take on the exciting possibilities that are waiting.”

Tettey, who took a recent tour of the campus and met with colleagues, will be at U of T Scarborough full-time in September. In the meantime, Vice-Principal, Academic and Dean William Gough will serve as acting principal.

U of T Scarborough's atmosphere of diversity and inclusion reflects Tettey's own background. He grew up in a diverse neighbourhood in Accra, Ghana.

“It wasn’t the most privileged neighbourhood,” he says.

Tettey's mother – who he says was his most significant influence – encouraged her children to connect with different people. “Home was the public square,” he says. “My friends would gather in our house. I learned to speak all the different languages, and because of that, people in Ghana have difficulty guessing where I’m from.”

In such an environment, it’s little wonder that supporting diversity became a central value for Tettey. He says he learned very early the values of hard work and serving others.

As an expert in the African diaspora, media and information technology, Tettey is looking forward to continuing his research in Toronto, citing the Centre for Critical Development Studies, the department of arts, culture and media, and the department of political science, as places where colleagues are doing work that dovetails with his own.

“The Toronto community connects me with my research and will allow me to connect with the communities with whom I do my work,” he says.

As principal, he intends to build on the local and global nature of the campus. “These are not different spheres,” he says.

“One of the things that’s striking to me is how the campus values diversity of different sorts – diversity of intellectual perspectives and diversity of backgrounds. When you’re on the campus, it is great to set your sights up and see the diversity right there.”

Read more about Wisdom Tettey at U of T News