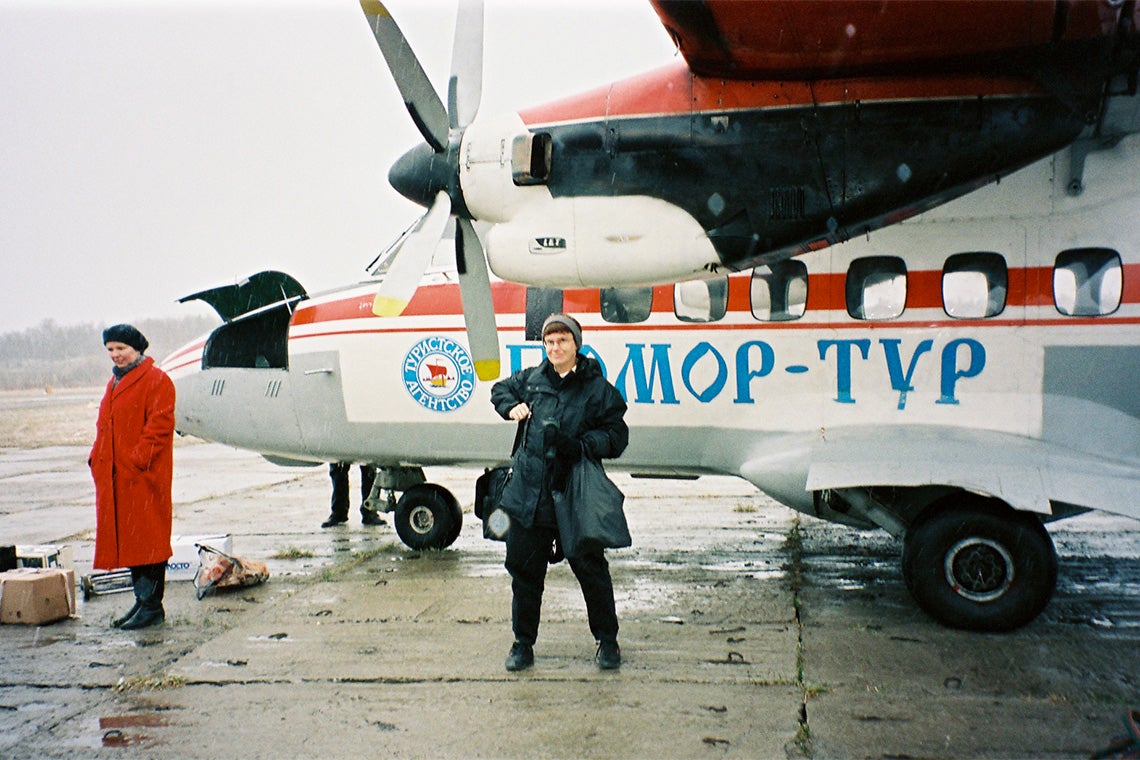 Lynne Viola, pictured arriving in Arkhangelsk, Russia in the late 1990s, is celebrated for archival research into the Stalinist era that provided revelations about perpetrators of violence and gave a voice to the oppressed (photo courtesy of Lynne Viola)

Lynne Viola was forced to contend with what she calls a “Cold War mentality” in Soviet studies after publishing her first book in 1987 – one that explored social support for Stalinism among the Russian working-class.

“The book entailed looking at a group of factory workers who would now be called perpetrators and that was extremely controversial in the West,” Viola says of The Best Sons of the Fatherland.

“People were so sure that the only perpetrators, so-called, were Stalin or Stalinism – and, of course, they’re central, but looking at [other] perpetrators was extremely important as we saw in later years in German history … so that caused me some trouble.” 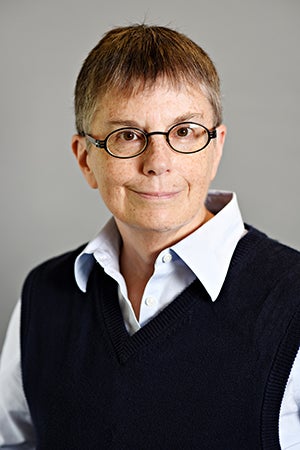 Nearly 35 years later, Viola, a University Professor in the department of history at the University of Toronto’s Faculty of Arts & Science with a cross-appointment to the Munk School of Global Affairs & Public Policy, is celebrated for her archival research into the Stalinist era that has provided revelations about perpetrators of violence and given voice to those who were oppressed by the Soviet dictator’s regime. She has authored five books and more than 30 articles, and supervised more than 20 PhD students since starting her professorial career at U of T in 1988.

Her extraordinary contributions were today recognized with the highest research honour bestowed by the Social Sciences and Humanities Research Council of Canada (SSHRC): a Gold Medal. One of the SSHRC Impact Awards, it recognizes a scholar whose research and leadership have significantly advanced understanding in their field.

Viola says she’s humbled by the recognition and felt a wave of imposter syndrome during a recent virtual rehearsal for the SSHRC Impact Awards roundtable session.

“I kept thinking of all the other Impact Award recipients – that, ‘God, they’re so much more interesting than me,’” she says. “So, it’s shocking, but it’s a great honour and I’m very, very grateful.”

The SSHRC Gold Medal completes a clean sweep of Canada’s three most prestigious humanities and social sciences awards for Viola, who won the Canada Council for the Arts’ Molson Prize in 2018 and Killam Prize in 2019. Her lengthy list of honours also includes a Guggenheim Fellowship in 2003 and induction into the Royal Society of Canada in 2014. “These honours are a tribute to her passion and fearlessness in sharing knowledge about Stalinist Russia that continues to benefit students and scholars at U of T, as well around the world,” said Melanie Woodin, dean of the Faculty of Arts & Science.

Viola’s fascination with Russia’s history began in high school, when her teachers introduced her to 19th-century Russian literature, including the works of Tolstoy and Dostoyevsky. Her interest continued in college even though she opted to study psychology.

“I thought I’d never be able to learn Russian,” she says.

But Viola’s command of the language improved and she ultimately switched majors – a decision that would ultimately help reshape the way 20th-century Russian and Soviet history is understood.

“As someone who shares Lynne Viola’s focus on documentary evidence, I have always been amazed at her diligence, expertise and command of Soviet archives,” says J Arch Getty, distinguished research professor at the University of California, Los Angeles and a leading scholar of the Stalinist period.

“Few scholars can match her intuitive understanding of the worlds of Russian workers, peasants and officials, and no one can understand the formative period of the Soviet Union without studying her work.”

Viola completed her graduate and doctoral degrees at Princeton University in the early 1980s amid the later phase of the Cold War – a period that she says posed varied complications for historians who were interested in the then-Soviet Union.

“It was very difficult to get into archives if you were studying the Soviet period,” she says. “When I was a graduate student, I got into archives for about four months and that was it.”

After the fall of the Soviet Union in 1991, more archives became accessible and Viola explored them in the company of eminent Russian historians.

“I really learned the ins and outs of the Soviet archives at that time,” she says. “It was like doing a second PhD.” 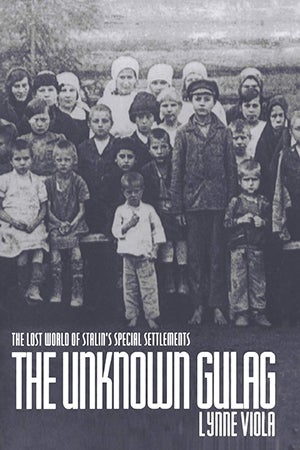 The improved access to archival information took Viola’s research in new directions. In the case of her 2007 book The Unknown Gulag: The Lost World of Stalin’s Special Settlements, she delved into previously classified documents to shed light on the plight of some two million peasants who were banished from their homes and farms en masse in the early 1930s and thrown into exile in the icy hinterlands. Hundred of thousands perished over the course of a decade.

Using peasants’ letters and other primary sources, the book captures the day-to-day life and suffering of families following Stalin’s brutal crackdown on the peasantry.

“I was able to follow them onto the trains, and then on foot or by small boat into the desolate wastelands and watch and learn how they built these little villages out of nothing in the dead of winter,” Viola says.

While historians from Russia tended to take a more state-oriented approach towards studying the mass repression of peasants, Viola says she sought to place more emphasis on conveying the peasants’ stories and experiences.

“[Aleksandr] Solzhenitsyn once said that peasants are a silent people – but they’re not,” Viola says. “The fact of the matter is they wrote thousands upon thousands of letters about all sorts of things through the 1930s to various agencies and people. And their children, who often became city-dwellers and professionals, wrote about their parents. That’s not silence.

“I don’t know that one, particularly an outsider – whether an outsider in time or in geography – can ever do full justice to these violated people. But that was certainly my motivation.”

In 2014, Viola was presented with another timely opportunity with the opening up of NKVD (former KGB) archives in Ukraine following the Maidan Revolution.

At the time, she had been searching – with little success – for quality sources on the experiences of perpetrators during the Great Terror of the late 1930s, when secret police arrested more than 1.5 million people at Stalin’s behest. So, when the KGB archives opened up, Viola and a colleague from Germany traveled to Kyiv to have a look.

“It was just amazing material,” she says. “They were basically the criminal files of the NKVD secret police who were arrested at the end of the Great Terror – Stalin’s scapegoats in short.” 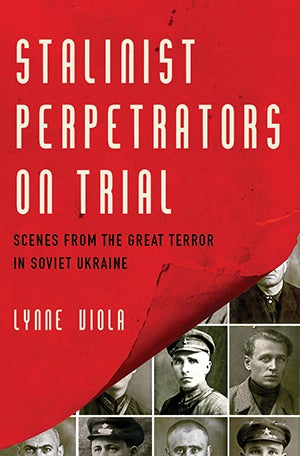 The research resulted in Viola’s most recent book, Stalinist Perpetrators on Trial, which drew on interrogation records, written confessions, court transcripts and other revelatory documents to outline how NKVD operatives were charged, tortured and executed by Stalin for crimes that he sanctioned during the Great Terror.

Viola describes the rush of excitement that swept the cramped reading room in the archives as she and historians from Ukraine and the Russian province of Siberia pored over the never-before-seen documents: “We were constantly jumping up and saying, ‘Read this! Read this!’ because nobody had seen this kind of material before. In most cases, [the other historians] were much more experienced in researching this topic than I was, but they, too, were shocked.”

Following the publication of Stalinist Perpetrators on Trial, Viola began to be contacted by people seeking guidance on how to use archives to track down information about family members.

“Some of them were quite successful in being able to get a sense of the experiences of their grandparents or great-grandparents,” Viola says.

The importance of putting names and faces to the ordinary people caught up in historical events is something Viola says she’s tried to impart to undergraduate students over the years – often by taking them, figuratively, into archives.

“They seemed very receptive to that because it brought home that we’re talking about real people – not just state institutions, not just ideologies.”

For Viola, working with undergraduates is a source of energy and inspiration. “I really like the way undergraduates think,” she says. “Their minds are so good and fresh and they come up with really original ideas, and it’s a joy to watch that.”

Viola adds that she derives tremendous fulfilment – and knowledge – from supervising PhD students. “I love to work with PhD students because they’re so smart, first of all, but second, I learn so much from them,” she says. “They choose original topics, they do original research in Russia and Ukraine – wherever they may need to go – and they become the experts on the topic. So, I benefit by learning about these things.”

Viola says she tries to guide young scholars on how to plan research, structure a dissertation and acquire the necessary discipline to write theses that are hundreds of pages long.

Leah Cowen, U of T’s associate vice-president, research, hailed Viola for enriching the landscape of Russian history and providing a springboard for younger researchers.

“Professor Viola’s tireless work over the decades has helped ensure that the real-life impacts of atrocities are not buried away, and that the truths and nuances of these tragic chapters are preserved in the pages of history,” Cowen said. “A passionate teacher and mentor, she has generously passed on her specialized knowledge to countless students and graduate researchers, and given the next generation of historians the foundations upon which to flourish.”

Viola also places a high priority on fostering a “standard of civility” in how her students carry themselves in academia and throughout their future careers.

“When I was in graduate school, it was during the Cold War and people were vicious to one another. And I don’t mean Soviets to Americans or Canadians – I mean your fellow scholars, your fellow students,” she says.

“It seems to me that if anything is not conducive to learning, it’s that kind of discourse. So, I try to encourage a level of civility in how we conduct our work and engage with each other.”