A 'heroic' scientist: U of T remembers Stephen Hawking, and his Convocation Hall visit 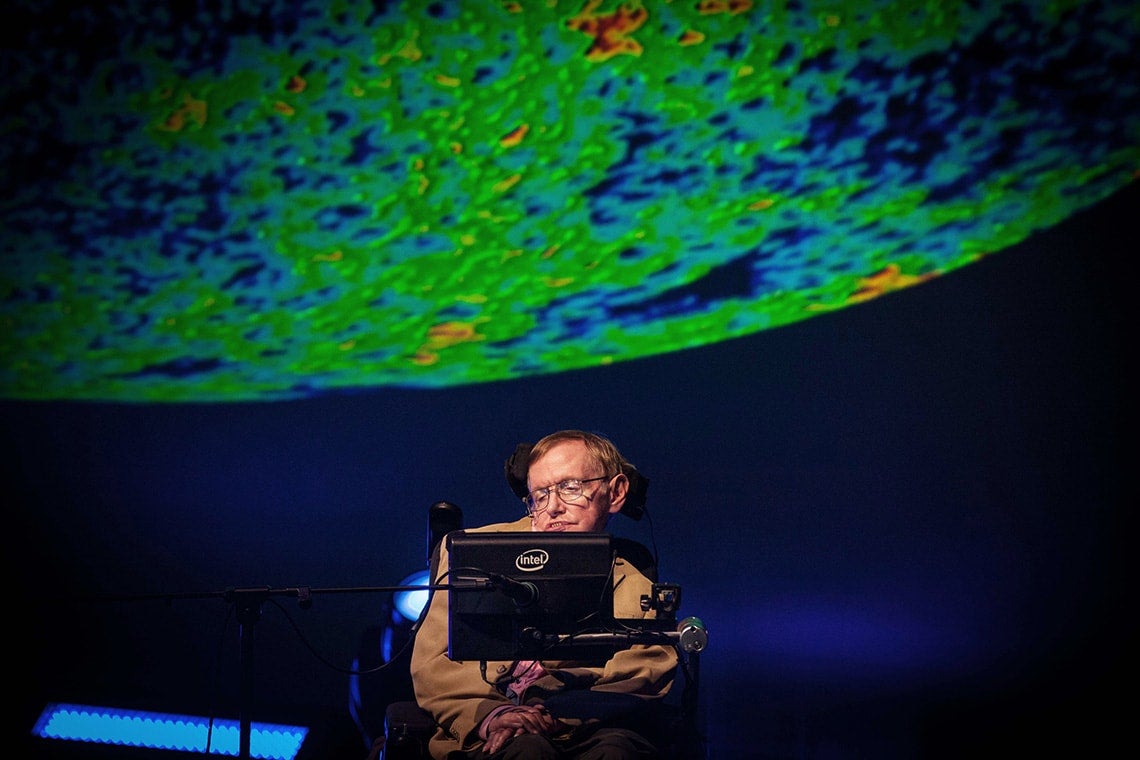 "Stephen [Hawking] himself has said, ‘My goal is simple: It’s to understand the universe,’” says U of T's John Polanyi, a Nobel Prize-winning chemist. “Now, that’s a very daring thing” (photo by Desiree Martin/AFP/Getty Images)

One of the world’s leading theoretical physicists and science communicators, Stephen Hawking inspired millions to mull grand questions about the cosmos and our place in it.

But he was apparently pleased to be included in others’ make-believe universes, too.

A.W. Peet, a professor of physics at the University of Toronto, attended a 1993 conference on the quantum aspects of black holes with Hawking that just so happened to coincide with the airing of his TV cameo on Star Trek: The Next Generation.

Hawking, who died Wednesday at age 76, appeared in a holographic scene aboard the USS Enterprise.

“After the day’s activities, we all crowded around the screen and watched this episode of Star Trek together,” recalls Peet, who was a graduate student at the time. “It featured Stephen playing poker with Isaac Newton, Einstein and Data, I think.

“Throughout the whole thing, he had this huge grin on his face.”

The anecdote captures much of what made Hawking such a unique figure – both in the realm of science and popular culture. On the one hand, he was a brilliant mind whose work on black holes was hailed as groundbreaking. But he was also a great scientific communicator who authored several books and made more than a dozen TV appearances.

Hawking’s star first began to rise in the early 1970s when he made a startling discovery: Black holes are not really black. Instead, he found they leak energy and particles, and eventually explode – a phenomenon that became known as Hawking radiation.

But Hawking was far from a one-hit wonder. He continued to publish regularly in the decades that followed, with his two most recent papers coming last year.

“His discoveries laid the foundations for a lot of really fascinating research areas that are currently being developed,” Peet says.

Unusual among physicists, Hawking also managed to convey his complex ideas to the wider public. He wrote the 1988 book A Brief History of Time: From the Big Bang to Black Holes hoping it would help him pay for his children’s education and his own home care.

It ended up selling 10 million copies.

Equally impressive, Hawking managed to accomplish almost all of what he did while battling Lou Gehrig’s disease. First diagnosed at the age of 21, the degenerative nerve illness gradually left him paralyzed over decades. He spent much of his life confined to a wheelchair and spoke via a voice system he initially controlled with his hand and, later on, a muscle in his cheek.

Hawking’s now iconic digitized voice delivered presentations and lectures around the world. That included a sold-out 1998 appearance at U of T that was organized by a group of students – apparently after a discussion at a local bar.

“Convocation Hall was packed and there was suitable drama,” recalls John Polanyi, a Nobel Prize-winning chemist and U of T University Professor who introduced Hawking at the event.

“A crane lifted him and his wheelchair onto the platform and then he came racing across to give his talk.” Pictured left: The Varsity's coverage of Stephen Hawking's visit to U of T in 1998 (courtesy of The Varsity and University of Toronto Archives and Records Management Services)

At the time, Polyani described Hawking’s work as “heroic,” noting that he dared to ask some of the biggest questions in science. He stands by that description two decades later. “Stephen himself has said, ‘My goal is simple: It’s to understand the universe,’” Polanyi says. “Now, that’s a very daring thing.”

The Con Hall talk wasn’t the first time Polanyi recalls the renowned physicist making a noteworthy entrance. He recounts a lecture he once gave at Cambridge, where Hawking was a professor: “I was just about to draw a breath and start and there was this huge commotion – a crash. That was Stephen Hawking coming through the swinging doors at high speed, of course lying prone in his wheelchair.”

Polanyi, for one, says he’s amazed at the sheer number of events Hawking participated in over the years, from academic conferences to public appearances.

“He had every reason to conserve his energy and stay in Cambridge, where he had half a dozen people trying to look after him, day and night,” Polanyi says. “He also had enormous ambitions in science. But to be in a position where you can’t take down a book without having someone do it for you – it’s all very hard to imagine.”

Peet, too, cites Hawking as a major career influence – both because of his intellectual prowess and his sheer determination to overcome incredible obstacles in the name of science. They first met at a Stanford University professor’s house in 1992 during a small dinner gathering associated with yet another conference.

“It was hugely influential,” Peet says of that brief, but fateful one-on-one conversation.

“It inspired me to go into the field. … It was a lovely thing.”