'The future Bantings and Bests': How insulin's discovery at U of T is fuelling research 100 years later 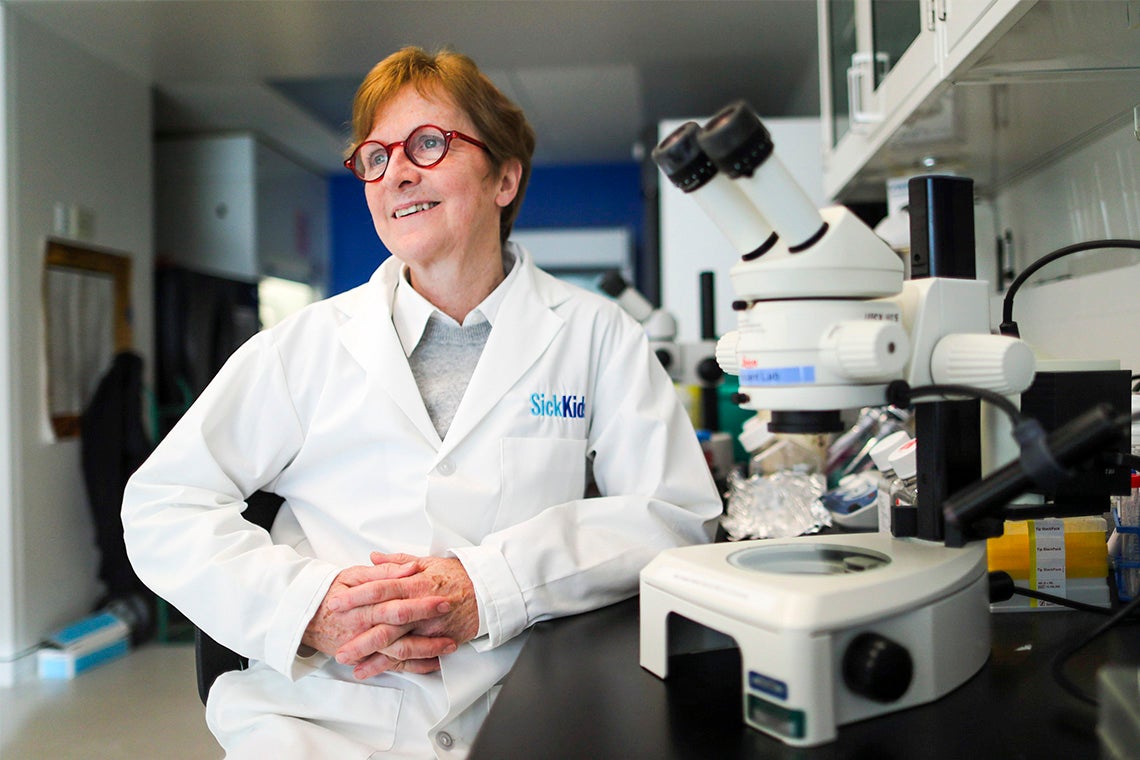 U of T's Janet Rossant, pictured here in her SickKids lab, says a $25,000 grant from the Banting Research Foundation was a key moment early in her career (photo by Richard Lautens/Toronto Star via Getty Images)

Six years earlier, she left her native England with degrees from Oxford and Cambridge. She had landed a position at Brock University in St. Catharines, Ont. – across the lake from Toronto.

Then an assistant professor of biology, Rossant headed a laboratory team seeking to understand how the embryo develops. To do that, the Rossant team was starting to develop transgenic mice.

“This was a new field of developmental biology, and we were excited by the possibility of being able to add genes to embryos and study their effect on development. But to do this research, we needed specialized equipment and we also needed the money to buy it,” says Rossant, who has been a researcher at the University of Toronto for the past 36 years.

So, Rossant applied to the Banting Research Foundation (BRF), which awarded her $25,000 – not a huge amount, but an important influx of financing for a researcher who was starting to build a track record.

“People like to talk about the tipping point,” she says. “When you’re a young investigator and you don’t have a lot of funding, it’s hard to move to the next level. So, the Banting Foundation was then, and still is, a really important support for new investigators, providing that critical piece of funding just when you need it.”

That early support paid off for Rossant – and for global society.

Over the next 30 years, Rossant conducted research on genetics and stem cells that earned her renown and a bevy of awards. Today, Rossant is a University Professor in the department of molecular genetics at the Temerty Faculty of Medicine, a senior scientist and chief of research emeritus at the Hospital for Sick Children and the president and scientific director of the Gairdner Foundation.

It’s an impressive career arc that, in many ways, can be traced to the discovery of insulin at U of T decades earlier.

In 1921, sixty-three years before Rossant applied for that $25,000 fateful grant, an unlikely team was hard at work in a U of T lab on a disease – diabetes – that had killed millions over the centuries and continued to bewilder scientists.

Frederick Banting, a physician with little research experience, and Charles Best, a medical student, were investigating Banting’s plan to isolate the mysterious secretion of the pancreas that controlled metabolism.

J.J.R. Macleod, then U of T’s chair of physiology, somewhat reluctantly gave the team lab space, equipment and dogs to use for testing.

The discovery won the Nobel Prize in 1923 and continues to enable people with type 1 diabetes to live full, rich lives – once an unthinkable outcome. But the legacy of insulin’s discovery goes well beyond diabetes by acting as a catalyst to stimulate a century of medical research in a dizzying array of areas.

For one thing, two research-supporting foundations were established in the spirit of Banting and Best, including the BRF.

“Our mission is to fund young investigators, the future Bantings and Bests, in the way they were funded by Macleod, at the beginnings of their careers when they have a bold idea that just might move society forward,” says Catharine Whiteside, BRF chair, former dean of medicine and an emerita professor with the department of medicine.

In 1960, W. Garfield Weston Foundation funding established the Dr. Charles H. Best Foundation. The original idea was to support research at the discretion of Best, who went on to conduct important studies in a number of areas and become a U of T research leader.

When Best retired in 1965, the funds were designated to U of T’s Banting and Best department of medical research. That unit later became part of the Donnelly Centre for Cellular and Biomolecular Research.

“Today, those funds are used to support researchers getting started on their careers through a program called the Dr. Charles H. Best Postdoctoral Fellows,” says Peter Lewis, the program’s board chair and former chair of the department of biochemistry at U of T. “This funding enables us to help researchers of a high calibre from around the world to pursue their ideas and to learn with the scientists of the Donnelly.”

“The influence of Banting and Best goes way beyond diabetes and insulin,” says Professor Reinhart Reithmeier, also a former chair of the department of biochemistry who was a winner of a Best Postdoctoral Fellowship in the late 1970s.

At the Donnelly Centre, the 2019 Best Postdoctoral Fellow Juline Poirson is studying the ubiquitin-proteasome system (UPS). It is critical in ensuring the normal functioning of cells, notably by destroying proteins that are no longer needed. But in diseases such as cancer, the UPS is dysregulated.

Poirson is working to understand why this happens with certain proteins. Her work could lead to important drug developments to treat diseases like cancer.

“I came from France to the Donnelly because I knew it would help me build on what I had already learned,” she says. “It is one of the best research centres in the world when you work on protein-protein interaction. This experience is going to help me for the rest of my career.”

Nomazulu Dlamini is an associate professor of pediatrics in the Temerty Faculty of Medicine and a staff physician at SickKids Hospital. The pediatric neurologist and scientist specializes in understanding and treating strokes in children. Her focus is dystonia, a disabling and painful disorder that can occur in children who have experienced a stroke. It’s characterized by involuntary, repetitive muscle contractions, twisting movements and abnormal posturing. Often, it is resistant to treatment.

It is thought that the problem originates in the basal ganglia, a network in the brain. Dlamini’s lab is studying the differences in the neural network between childhood stroke patients who have dystonia and those who don’t. Understanding why some children experience dystonia will increase the potential of developing effective therapies.

The BRF awarded Dlamini $25,000 in 2018 to support her work in understanding dystonia.

“That support has been very helpful. With the pilot data from the work we have been able to get because of the Banting funding, we’ve been able to leverage that for further funding,” says Dlamini.

“That’s all because Banting believed in our idea of discovering why there is this difference between these two groups of children.”

This story, which has been edited and condensed, was originally published in U of T Med Magazine’s Insulin Issue.