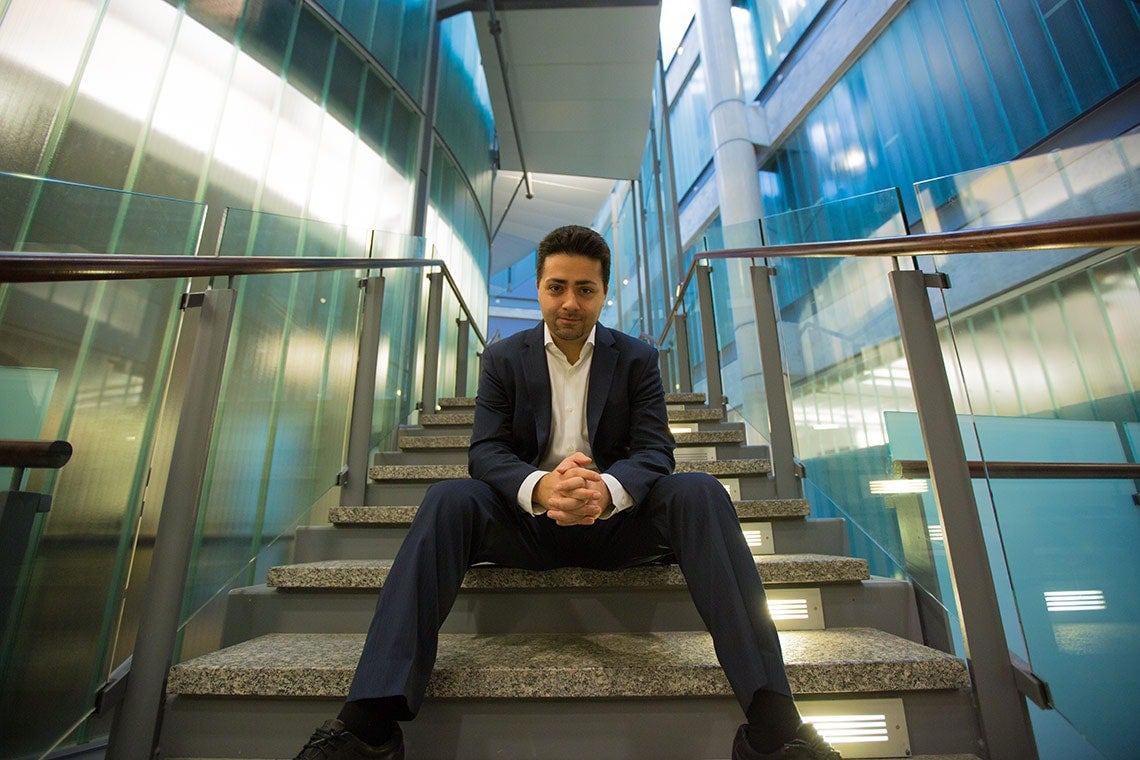 Parham Aarabi, an associate professor in the Faculty of Applied Science & Engineering, founded ModiFace 11 years ago. The startup's widely used technology allows consumers to virtually try on makeup and other beauty products (photo by Johnny Guatto)

A University of Toronto startup that lets consumers virtually try on makeup, hair and other beauty products has been scooped up by the world’s biggest cosmetics company – a move that could result in Toronto becoming a hub for “beauty tech” research.

France’s L’Oréal said Friday it was buying ModiFace, which applies augmented reality and artificial intelligence to the beauty industry, for an undisclosed sum.

The deal was touted as a first for the 109-year-old cosmetics giant, which owns such popular brands as Maybelline, Lancôme, Kiehl’s and Shu Uemura.

“Beauty companies usually buy other beauty companies,” said Parham Aarabi, the founder and CEO of ModiFace and an associate professor in the department of electrical and computer engineering in the Faculty of Applied Science & Engineering.

“This will be the first tech company under L’Oréal.”

Aarabi founded ModiFace 11 years ago after he realized his research into computer vision and facial tracking could be applied to the cosmetics industry, allowing people to see what they look like wearing different shades of makeup and other beauty products.

He said the company’s first customer was the maker of Botox, which reached out to him after learning about a lip-tracking project that involved the addition of a “skin-clearing” effect.

“They came to me asking if we could create a simulation tool,” Aarabi said.

Read about the deal at CNN

Read about the deal at the Globe and Mail

ModiFace’s technology, now even more sophisticated, has since been adopted by more than 100 brands. The startup uses live video to track facial features like eyes and lips and then, based on those features, renders different makeup, hair or skin effects.

Aarabi said the company also uses artificial intelligence, or AI, to “understand both faces and consumers in terms of how they interact and the shades they try on.”

L’Oréal's purchase of ModiFace demonstrates how important technology has become to the US$460 billion global cosmetics industry. L’Oréal, for example, generated about eight per cent of its sales online last year, compared to just five per cent two years earlier, according to Reuters.

Lubomira Rochet, L’Oréal's chief digital officer, said in a statement the acquisition of ModiFace will “support the reinvention of the beauty experience around innovative services to help our customers.” Aarabi, who will remain ModiFace’s CEO, said ModiFace will continue to be based in Toronto – “on a corner of the U of T campus” – after the deal is completed. He added 60 of the company’s 70 employees, including researchers and engineers, have a connection to U of T, and that the company plans to tap the university’s vast pool of engineering and computer science talent as it continues to grow under its new owner. ModiFace said last year it was investing $4 million in new undergraduate and graduate internships, as well as support for U of T engineering research.

“U of T is one of the world’s most prominent research institutions, especially when it comes to AI and computer engineering – and that’s been key for us,” Aarabi said.

While so-called “beauty tech” may not sound as potentially disruptive as self-driving cars or AI-powered lawyers, Aarabi said the sector, and the vast amount of money that underpins it, could play a significant role in contributing to Toronto’s emergence as a global research and innovation hub.

“It’s pretty established now in the beauty industry that AR is a key technology that every brand needs to have,” Aarabi said, adding that consumers place a high value on trying on cosmetics products before plunking down cash to buy them.

“It solves a key problem the industry has had for over 100 years.”