Drugging detained children is like using a chemical straitjacket 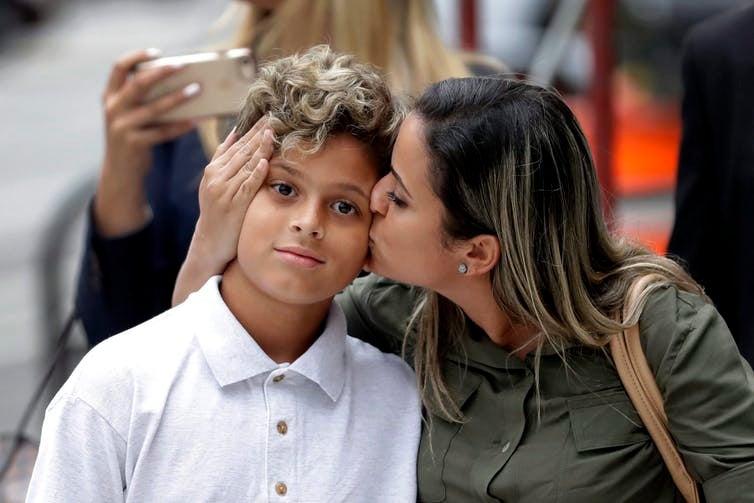 Sirley Silveira Paixao, an immigrant from Brazil seeking asylum, kisses her 10-year-old son Diego Magalhaes, after he is released from immigration detention in Chicago on July 5 (Charles Rex Arb/AP)

There are almost 13,000 detained migrant children in the United States, according to several recent news reports. This number has increased six-fold since 2017, despite the successful reunification of some families.

You might remember the horrifying images of children inside chain-link fences with flimsy aluminum foil blankets from earlier this summer. Digital media and cable news broadcast close-ups of these children’s faces, tears streaming down their cheeks; these same images were then shared millions of times on social media.

While the number of children detained in this way is shocking, the mistreatment that many face after being forcibly removed from their families is even worse. One of the least visible and most potent forms of abuse is the use of medication to forcibly sedate them.

As researchers who investigate incarceration and mental health, we have studied the patterns of psychotropic medication use in prisons and detention centres in the U.S. to control the behaviours of youth.

Preliminary findings from this research show the negative effects of coerced medication, or what we describe as “pharmaceutical violence.”

Recently, U.S. District Judge Dolly Gee ruled that the government broke the law when officials in Texas sedated children who had been separated from their migrant parents. We applaud her recent ruling even as we remain concerned about the recurrence of such a practice.

We are also concerned about the fate of the approximately 13,000 migrant children who have not yet been reunited with their parents, especially as the Trump administration works to replace the Flores settlement which limits the length of time children can be detained.

While the Trump administration’s forced separation immigration policies have since been suspended, and some of the children returned to their families, the long-lasting impacts of such treatment remain troubling.

Gee’s recent decision mandates that the government must obtain consent or a court order in order to administer psychotropic medications to children, barring an emergency. She also ruled that officials must tell children in writing why they are in a secure facility.

Her ruling was in response to a lawsuit launched by the Centre for Human Rights and Constitutional Law. According to the lawsuit, the medications serve as a “chemical straitjacket.” In other words, officials were sedating children who had no existing psychological conditions.

According to several reports, children at Shiloh Treatment Facility in Texas have been given up to 15 different pills a day. Those who refused were threatened with further time in confinement. Moreover, children in other locations who complained about missing their parents, begged to leave or who staff deemed to be a “problem,” were sent to Shiloh to be medicated.

Sadly, we’ve seen this dynamic in the past. Detention centres are infamous for overly medicating incarcerated individuals in order to obtain their co-operation.

Ethnographic studies of American prisons, from the 1940s up until the present day, reveal the misuse of medications by detention staff as a common problem.

In a milestone case, Walter Harper sued the Washington State government arguing that they could not medicate him without his consent. This led to the Washington v Harper Supreme Court ruling in 1990 that allows detention centres to medicate incarcerated individuals.

While conducting fieldwork with incarcerated young women in southern California recently, we discovered a similar pattern. Officials in detention centres were dosing women in their care.

These young women were diagnosed with mental health disorders and compelled to take drugs while in detention. They became chemically dependent. Upon leaving prison, they were barred from access to the medications they had in custody, leading them to take street drugs, drink and engage in other high-risk behaviours.

Most young women reported feelings that prison staff prescribed psychotropic medication to regulate their actions, behaviours and personal freedom. In other words, these detainees, many of whom were Latina, were fitted with the same “chemical straitjackets” used on migrant children today.

Medication of detained children must stop

It is imperative to limit the detention of migrants and to immediately end the use of psychotropic medications on children.

Furthermore, qualified medical staff must be present in centres where children are housed.

Detention centres, funded by tax dollars, must be open to public scrutiny. As the public continues to bear witness to new images of imprisoned children, people should examine the misuse of medical technology that confines not only the bodies but the minds of those made to inhabit these places.

Jerry Flores is an assistant professor of sociology at U of T Mississauga. Kati Barahona-Lopez is a PhD candidate in sociology at University of California, Santa Cruz.

This article is republished from The Conversation under a Creative Commons licence. Read the original article, including their disclosure statements.