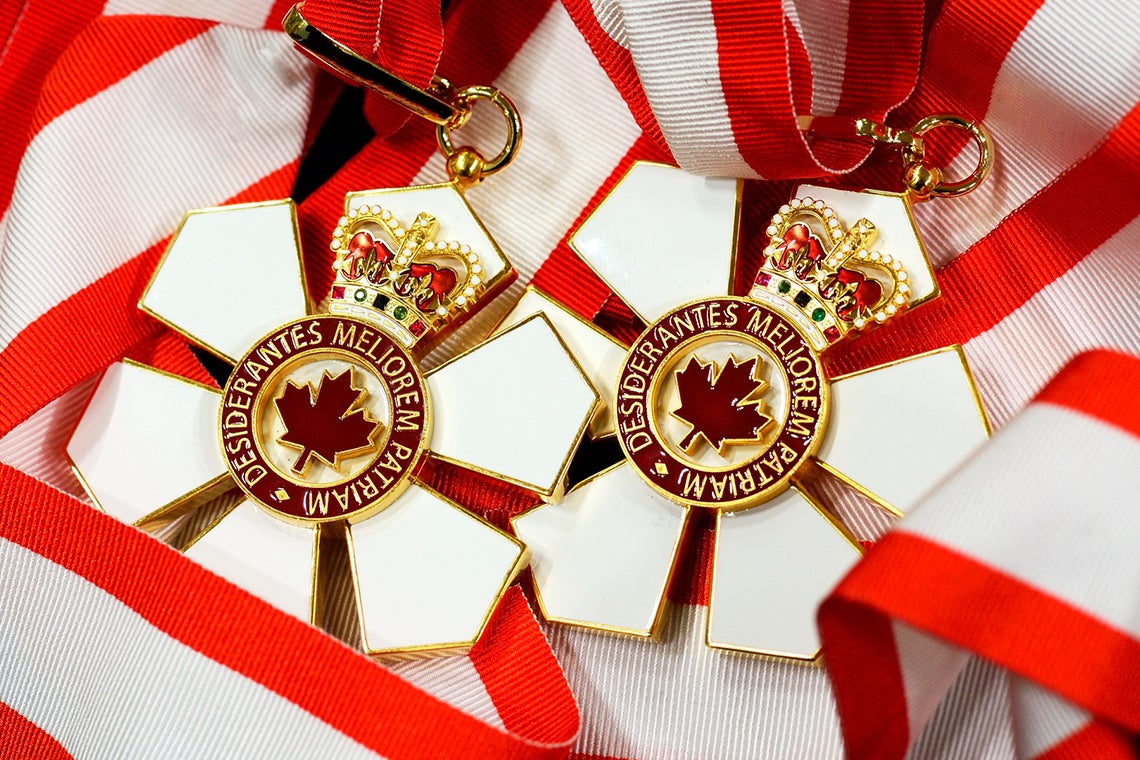 More than two dozen leading lights associated with the University of Toronto have been recognized by the Order of Canada – one of the country's highest civilian honours.

The long list of luminaries associated with U of T includes David Cameron, dean of the Faculty of Arts & Science. Cameron has been named a Member of the Order for his “governmental expertise in federal negotiations and constitutional affairs,” as well as his contributions as a scholar and academic leader.

A professor of political science, Cameron has lent his expertise to governments around the world. He's advised the government of Sri Lanka, travelled to Baghdad on behalf of a Washington-based institute promoting democracy and helped the Estonian government reform the country's constitution.

The new appointees and promotions within the Order were announced Friday by Governor General Julie Payette, herself a U of T alumna and former astronaut who was the first Canadian to board the International Space Station. 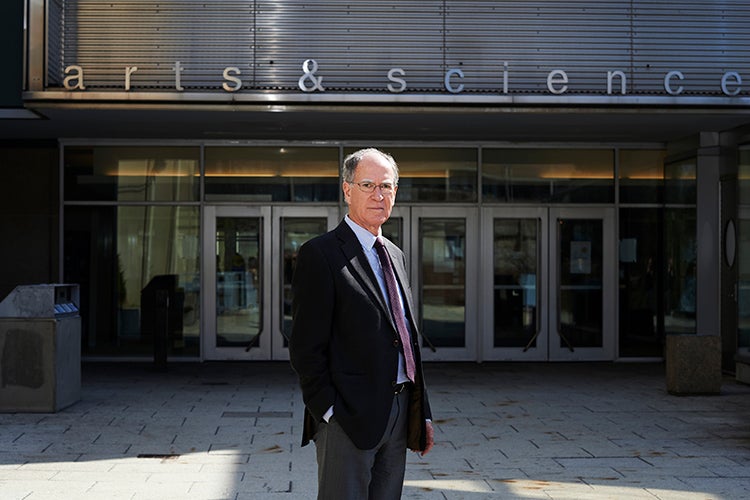 Other Order of Canada honourees with connections to U of T include faculty whose expertise ranges from neurodegenerative diseases to Canadian history and politics.

University Professor Peter St George-Hyslop, an acclaimed geneticist and doctor, was made an Officer for his contributions to the study of Alzheimer's and other neurodegenerative disorders. He took an interest in Alzheimer's as a medical student in the 1970s. Today, he's one of the top-cited authors in the field, having published over 200 articles. He and his team of researchers have helped discover key genes and proteins that cause cell degeneration in early onset Alzheimer's and other neurodegenerative illnesses.

Robert Bothwell, a professor of history and international relations in the Faculty of Arts & Science and the Munk School of Global Affairs, was named a Member for his “influential research of Canadian history, politics and foreign policy affairs.” He began teaching at U of T in 1970 and has written more than 20 books on Canadian history, including the Penguin History of Canada and an award-winning biography of the influential cabinet minister and businessman, C.D. Howe.

Dr. Allan Detsky has been named a Member in recognition of his “advanced economic expertise in the Canadian healthcare system, notably with respect to clinical policy making through cost-effective enhancement to improve patient outcomes.” He is a graduate of Harvard Medical School and holds a PhD in economics from the Massachusetts Institute of Technology. Detsky, a general internist and professor at U of T's Institute of Health Policy, Management and Evaluation, was physician-in-chief of Mount Sinai Hospital from 1997 to 2009.

Jack Gerrow, an adjunct professor and alumnus of U of T's Faculty of Dentistry, made it his mission to improve dentistry education so that graduates learn to care for their patients safely and successfully. He has been appointed a Member of the Order for his contributions in dentistry, “notably in the areas of accreditation and competencies.” He served as executive director and registrar of the National Dental Examining Board for 24 years, and has helped develop examinations and certification processes in Australia, South Korea and Hong Kong.

Dr. Mitchell Halperin, a professor emeritus of medicine, has been named a Member for his “renowned leadership within the field of nephrology,” the branch of medicine that deals with kidneys. He is one of Canada's leading renal physiologists and has studied kidney disease for over three decades, according to the Kidney Foundation of Canada. He also played a key role in the development of St. Michael's Division of Nephrology, which didn't exist before his recruitment to the hospital 50 years ago.

Dr. Bryce Taylor, professor of general surgery at U of T and former surgeon-in-chief at UHN, has been named a Member for his “sustained impact on the teaching and practice of surgery in Canada.” Taylor is recognized, in particular, for his advocacy in improving surgical safety standards and patient care. He has helped devise a safe surgery checklist, which has been found to reduce surgical complications and mortality.

Dr. Taylor earned his medical degree and completed postgraduate training at U of T. His specialities are hepatobiliary and pancreatic surgery. He was part of the team that initiated the U of T Liver Transplant Program, and he describes the lessons he learned over a career in leadership roles in the book Effective Medical Leadership.

Dr. James Waddell, a renowned orthopedic surgeon on faculty in U of T's division of orthopedic surgery, has been appointed a Member for his “sustained leadership” in the field and for “his dedication in advancing best practices in orthopaedic care across Canada.” He did his postgraduate training at U of T, and served as surgeon-in-chief and medical director of the trauma program at St. Michael's Hospital.

Andrea Baumann, a status faculty member at U of T's Institute of Health Policy, Management and Evaluation, has been named a Member for “her leadership in advancing nursing education and in shaping policy and practice in the field of health human resources.” She completed her PhD at U of T in 1988, has over 200 peer-reviewed articles and is recognized as an expert in health systems, human resources and workforce integration.

David Morley, the president and CEO of UNICEF Canada who teaches at the Munk School of Global Affairs, was named a Member for his work in international development and for helping to improve the lives of children and families around the globe. He has helped grow the organization and shape Canadians' response to the Syrian humanitarian crisis, according to UNICEF Canada.

Dr. John Conly, an infectious disease specialist who taught in medicine at U of T, was recognized for his dedication to anti-microbial resistance and infection control. He now teaches at the University of Calgary.

In an interview with CBC, he said he was surprised to have been made a Member of the Order; in fact, he thought the Canadian government called about his taxes. "But when I called back it was Rideau Hall and the Chancellery of Honours," he said on The Homestretch.

"When I looked at the list of honourees over the years, it's really quite humbling to be in this group of company," he added.

U of T alumni from a variety of fields – philanthropy, literature, medicine and education, to name a few – were also recognized for their achievements.

The Governor General honoured another astronaut with links to U of T – Roberta Bondar, who was promoted to Companion. The grade recognizes national pre-eminence or international service or achievement. Bondar, who earned a PhD in neurobiology from U of T in 1974, was the first Canadian woman in space.

Among her carry-on aboard the space shuttle Discovery was the crest of Erindale College (now U of T Mississauga). She also holds an honorary degree from U of T.

Lorne Michaels was also promoted to Companion. The creator and producer of Saturday Night Live honed his comedy skills at U of T. He wrote for and directed the Hart House troupe UC Follies, graduating in 1966. He's since come back to the university to shoot the comedy Mean Girls in Convocation Hall and to accept an honorary degree in 2002.

Cindy Blackstock, a member of Gitxsan First Nation who obtained a PhD in social work from U of T in 2009, becomes an Officer for “her leadership as a champion of Indigenous children and for her efforts to build a culture of reconciliation.” She is a professor at McGill University and has advised the UN Committee on the Rights of the Child, UNICEF and the UN Permanent Forum on Indigenous Issues. She received an honorary degree from U of T in June. 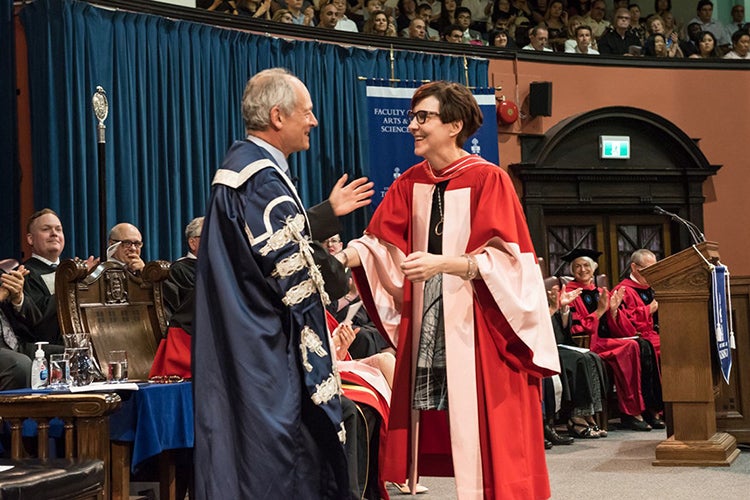 Cindy Blackstock, who has been named an Officer of the Order of Canada, shakes hands with U of T President Meric Gertler while accepting an honorary degree in June (photo by Lisa Sakulensky)

A number of alumni were recognized for making an impact in medicine. Annette O'Connor, who completed her undergraduate and graduate degrees in nursing science at U of T, has been made an Officer for her leadership and research in “shared decision making,” the process by which a clinician and patient reach an informed, health-related decision together.

Dr. Jack Kitts, who interned at U of T, has been named a Member for his leadership in developing patient-centred care. Yvonne Steinert, a clinical psychologist and professor of family medicine at McGill University, joins the Order as a Member for her contributions to medical education.

Dr. Mohit Bhandari earned his MD from U of T in 1994. He has been appointed a Member for his contributions in the area of orthopedic trauma and his research on intimate partner violence.

Dr. Gilles Lavigne, who graduated with a PhD in dental medicine from U of T, has been named a Member for his work as a dentist and neuroscientist, “leading to an understanding of the interactions between pain and sleep disorders.”

Peter J. Dillon, a new Member, studies the biogeochemistry of lakes and their catchments. The U of T alumnus, former teaching assistant and former adjunct professor is lauded for his contributions to limnology, the study of bodies of fresh water.

Composer David Jaeger, who graduated with a master's in music in 1972, established a digital sound synthesis facility at U of T, one of the first in Canada, before joining CBC. He has been named a Member for being "at the forefront of Canadian music creation, performance and promotion.”

Hilary Pearson, president of the Philanthropic Foundations of Canada and a U of T alumna, has been appointed a Member for her leadership in “establishing a culture of philanthropy in Canada.”

Barry Callaghan, who holds a bachelor's and master's from U of T, has been named a Member for his contributions to CanLit as a publisher and writer. Also in Canadian literature, the teacher, critic and editor, Elizabeth Waterston, has been appointed to the same grade for her contributions and work as a mentor to writers across the country. She earned a bachelor's degree and PhD at U of T.

Veronica Strong-Boag, who earned a bachelor's and PhD in history at U of T, has been appointed a Member for her activism and her research on the history of women in Canada.

Seana McKenna is named a Member for her contributions to the Canadian stage, particularly at the Stratford Festival. She attended U of T before going to the National Theatre School in Montreal, and she holds an honorary doctor of letters from U of T. She’s won several awards, including a Genie for best supporting actress in The Hanging Garden.

Rebecca Jamieson, the president and CEO of the post-secondary institution Six Nations Polytechnic, has been named a Member for advancing Indigenous education. She holds a master's in education from U of T.

Did we miss anybody? If you know of recent Order of Canada honourees with ties to U of T who aren't mentioned above, please let us know at uoftnews@utoronto.ca.