'Diligence, focus and passion': Rose Patten is installed as U of T's 34th chancellor 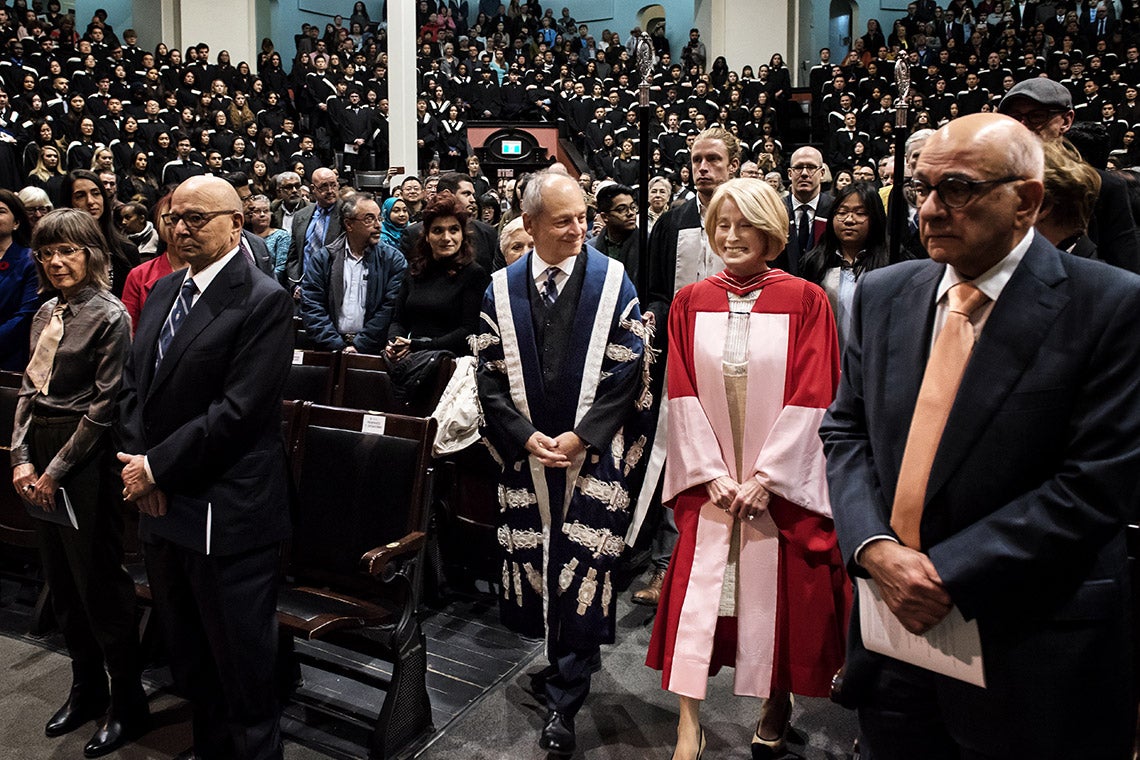 Rose Patten enters Convocation Hall with U of T President Gertler in advance of the robing ceremony. Her husband Tom Di Giacomo is second from the left (photo by Lisa Sakulensky)

It was shortly after 11 a.m. when Rose Patten clasped – with both hands – the outstretched palm of the first graduate to cross the stage at the University of Toronto’s 2018 fall convocation.

Patten, who was installed as U of T’s 34th chancellor only a few minutes earlier, would go on to repeat the ritual during the ceremony at Convocation Hall – the first of two scheduled for Monday.

Each time the gesture was accompanied with a warm smile and a few words of encouragement.

“You have the potential to be among the most impressive leaders of your time,” Patten said during an address to the hall, which was also packed with family and friends, “and you are pursuing your dreams at a time when leadership has never been more important.

“When great leadership is present we always see critical thinking and technological innovation.” 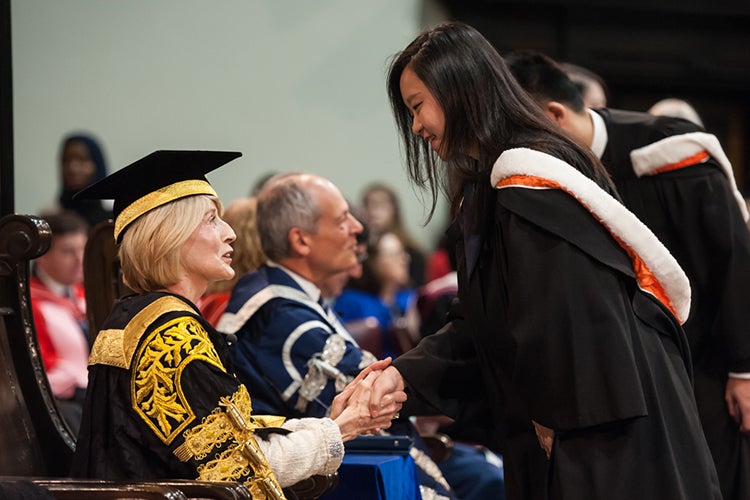 Leadership, of course, is a quality with which Patten is intimately familiar. She’s spent three decades working in the highest echelons of Bay Street and, at one point, simultaneously held the positions of vice-president of business strategy and executive vice-president of global human resources at BMO Financial Group.

To this day, she continues to be a special adviser to the bank’s CEO and other senior executives, and is sought out for expertise on issues such as leadership development, strategy execution and succession planning.

Patten also has a long history at U of T, having served on Governing Council for nine years – including three years as chair. She chaired the task force on governance structure, whose 2010 report included recommendations on the university’s current tri-campus governance structure. Patten, who holds an honorary degree from U of T, is also an executive-in-residence and adjunct professor in executive leadership programs at the Rotman School of Management, a member of Massey College and a member of the university’s Boundless campaign executive.

“She knows us better than we know ourselves,” U of T President Meric Gertler joked before he introduced Patten to a crowd of over 200 people during a luncheon event at Rotman to celebrate Patten’s investiture.

“But she also applies to her new role all of her characteristic diligence, focus and passion in the advancement of our shared mission.”

For Patten, that mission includes being a source of transformative innovation in fields ranging from computer science to medicine, while simultaneously acting as a defender of the human values on which true, sustainable progress depends.

“We are exploring not just the ‘what’ and the ‘how,’ but also the ‘why’ in response to the great questions of this and every age,” Patten said during her Convocation Hall remarks. 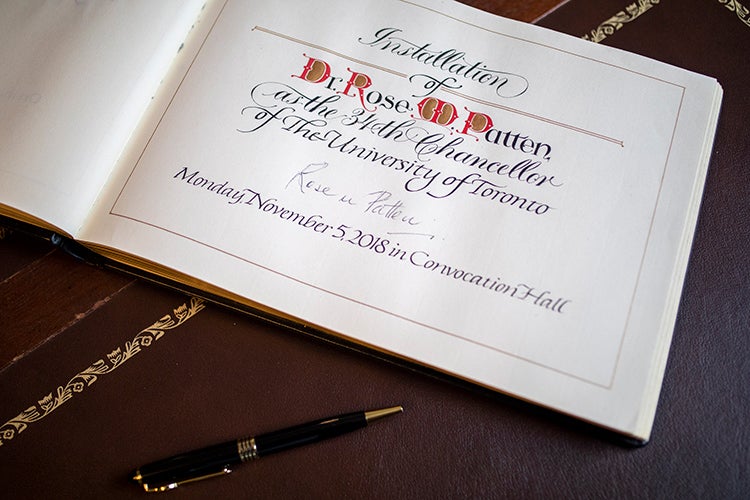 Patten’s first day as chancellor began in her office at Simcoe Hall. Representatives from across the university, including its various colleges, schools and administrative offices, crammed into the tiny room and modest anteroom – all of them wearing academic robes and other regalia.

They were later joined by President Gertler, the vice-presidents and principals of U of T Scarborough and U of T Mississauga – Wisdom Tettey and Ulrich Krull, respectively – as well as President Emeritus David Naylor, Chancellor Emeritus Hal Jackman and outgoing Chancellor Michael Wilson.

While Patten posed for photographs and chatted with colleagues, Claire Kennedy, chair of U of T’s Governing Council, and Wilson rehearsed their roles in the official robing ceremony that was about to take place on Convocation Hall’s stage.

After a quick group photo outside, the procession split in two and entered Convocation Hall, where Patten was officially installed.

“Few people have contributed as much energy to the well-being of this university than Dr. Rose Patten,” said York University Chancellor Greg Sorbara, a former provincial finance minister who spoke on behalf of Ontario universities.

He was followed by Scott MacKendrick, the president of the University of Toronto Alumni Association. MacKendrick called Patten, whose role includes acting as ambassador to U of T’s more than half million alumni around the world, “a model U of T citizen and one of our fiercest champions.”

Speaking on behalf of faculty members, Vice-President and Provost Cheryl Regehr praised Patten for encouraging “each and every one of us to attain excellence as leaders and strategically work to make the university, our communities and the world a better place,” while Governing Council member P.C. Choo, said, on behalf of staff, he’s confident Patten will continue to serve the university with distinction in her new role.

Perhaps the most inspiring remarks – fittingly, given it was a convocation ceremony – were delivered on behalf of the student body.

After talking about the importance of resilience, undergraduate student Price Amobi Maka said Patten’s career as a business leader, philanthropist and champion of women in leadership made her an ideal role model for U of T students.

“Even after a serious car accident, when doctors said she would likely never walk again, she did not allow anyone to determine her fate,” he said, referring to a 1983 incident that involved Patten being struck by a car on University Avenue.

“She exemplified the true values of U of T and overcame all adversities to become the champion we see here today.”