'Creating magic with technology': How U of T alumnus Raffaello D’Andrea uses drones in live shows 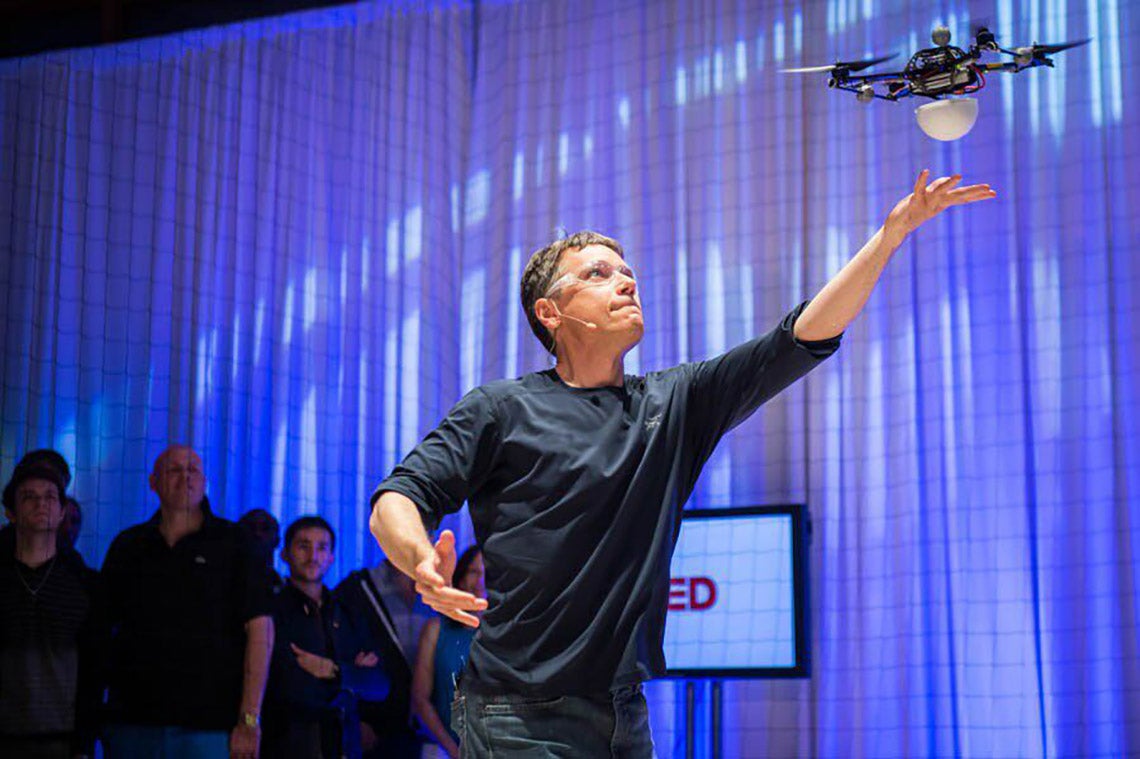 There aren’t many engineers who can say they’ve worked with Drake and Metallica, but Raffaello D’Andrea can.

D’Andrea, an alumnus of University of Toronto's Faculty of Applied Science & Engineering, is a founder of Verity Studios, where he and his team specialize in creating indoor light displays for live events with dozens of autonomous drones flying in tandem. The Zurich-based company is known for its precision drone technology and its ability to provide a complete solution, from development to execution.

“We’re creating new experiences using robotics and machine learning that you could never imagine that you could do until now,” says D’Andrea. “We’re basically creating magic with technology.”

And the results are certainly magical. Co-ordinated swarms of drones create a mesmerizing dancing cloud of light that move in tune to Drake’s song Look Alive, or provide a dynamic backdrop to accompany Metallica’s guitar riffs. D’Andrea has also worked with Cirque du Soleil on shows that leave audiences in a state of childlike wonder.

That sense of wonder may be the foundation of all D’Andrea’s creations. As a child, he was constantly curious about the world around him and eager to experiment.

Verity Studios collaborated with Cirque Du Soleil to create custom drones that were able to react to any single point of failure (motor, battery, etc) and remain in flight (courtesy of Verity Studios)

Sometimes he was too eager. He recalls learning about water pressure by jumping into a swimming pool with a garden hose in his mouth and bricks tied to his legs, and discovering the properties of aerodynamic stability (or lack thereof) by leaping from his rooftop with a lawn umbrella. His childhood included multiple unplanned haircuts from experiments with fireworks and flammable liquids.

“It just seemed like the most natural thing to me,” he says. “I was curious about the things I saw and I just wanted to learn more about them, so I figured the fastest way to learn about something is by doing experiments.”

In addition to his work with Verity Studios, D’Andrea is professor of dynamic systems and control at the Swiss Federal Institute of Technology (ETH) in Zurich, where he has been since 2008. Before that, he was an assistant professor at Cornell University, where he experimented with creating a team of autonomous soccer-playing robots – ultimately leading the Cornell Robot Soccer Team to four world championships at the international RoboCup competition.

While on sabbatical in 2003, D’Andrea dived into developing a new robotic system of a much more ambitious scale. Together with co-founders Mick Mountz and Peter Wurman, he launched Kiva Systems, an automated warehouse storage and retrieval system powered by thousands of autonomous mobile robots.

“I didn’t know anything about distribution when I got into it,” admits D’Andrea. “But what originally drew me to it was that I got to create a completely new way of moving things in factories and that was a beautiful challenge.”

“It’s like when I jumped off the roof of my house – I practised jumping onto the grass first, and I worked my way up to it. I was very scientific, I took a lot of precautions and I made sure that I minimized the risk of hurting myself,” he says. “Likewise in business, you make sure you understand the risks and what it is that you’re dealing with and the consequences.”

D’Andrea also credits his co-founders for softening the learning curve. “That’s the wonderful thing about having other founders in the company. They lived and breathed the business and market part of the problem and my role was to create the solution that would address the market gap,” he says.

Over the course of five years, D’Andrea led the systems architecture, control algorithms development, robot design, and robot navigation and co-ordination. He remained an adviser at the company even after moving to Zurich in late 2007. By the time Amazon acquired Kiva for $775 million in 2012, it was a 300-person company, with robots deployed in more than 30 warehouses and clients that included Walgreens, Staples and The Gap. It has since been rebranded as Amazon Robotics, and is the core of all robotics activities at Amazon. Today, D’Andrea is looking toward his next challenge: taking Verity to greater heights.

The company’s flagship product, Lucie micro drones, offer unparalleled creative freedom. The lightweight multi-rotor drones are equipped with pre-programmable lights and have performed thousands of flights in locations including Madison Square Garden, Changi Airport and the Dubai Mall. But D’Andrea sees opportunities for more versatility beyond the stage.

“The core underlying technology can be used for completely different applications – for example, having the ability to put a sensor anywhere in space and time,” he says.

“Say you want to monitor a warehouse or do security monitoring of a large indoor industrial complex, you can use drones to move sensor to make sure there are no leaks, radiation or large temperature fluctuations in different parts of your facilities.”

Achieving these goals requires overcoming more than just technical challenges, it demands a team that is as co-ordinated as their drones.

“I received a great backbone in science, engineering and mathematics as a student in Engineering Science at U of T, but building a company goes beyond that,” he says.
“You’re bringing something to life that doesn’t exist yet, with a whole bunch of different moving parts – the financial part, the market part and the people part. Especially the people part.

“At the end what makes a startup company successful is not the idea or the amount of funding you have. It’s the people you assemble and how well they work together. It’s about creating something magical. That’s what keeps me motivated.”