From clunky to cool: U of T startup helps life sciences researchers struggling to illustrate their work 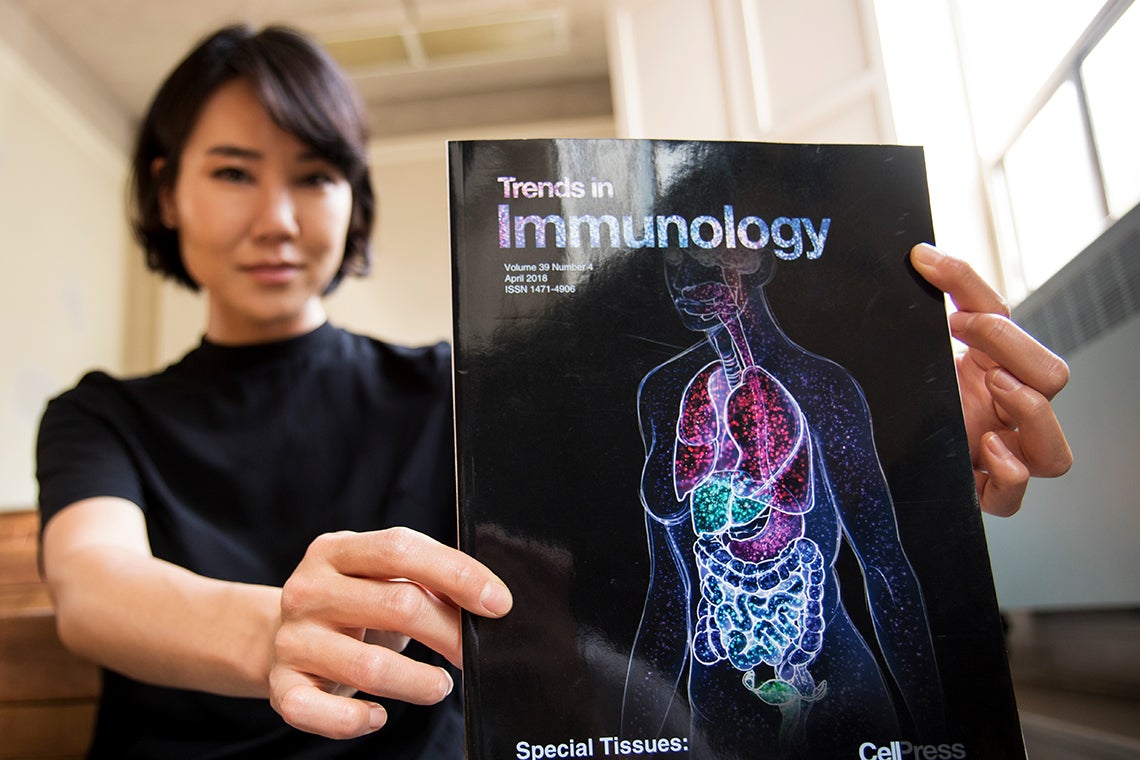 Shiz Aoki, the CEO of BioRender, holds up a journal whose cover art was made with her startup’s web-based software (photo by Chris Sorensen)

Shiz Aoki has a simple but powerful way to demonstrate the need for BioRender, a University of Toronto startup whose web-based tool helps bioscience researchers produce eye-catching illustrations of their work.

She flips open her laptop and loads a page featuring a dozen garish diagrams – each a mish-mash of jagged starbursts, flattened ellipses and multi-coloured arrows.

“These literally show the same biologic process in 12 different ways, which is just crazy,” says Aoki, a medical illustrator who is BioRender’s co-founder, CEO and an occasional lecturer at U of T’s Faculty of Medicine.

“Some of these are Nobel-winning scientists who are making the front page of really prestigious science journals, but when you open it up and read the articles, the images that are supposed to capture that science are completely unstandardized, which is obviously an issue for educational purposes.

“The quality is pretty crappy, too.”

The issue, Aoki says, is there’s currently no widely accepted way for researchers working in fast-growing fields like immunology and microbiology to communicate their work visually – let alone software tools to help them do it.  After all, she adds, you can dissect the body and draw the heart as you see it, but the same isn't true when it comes to protein structures and chemical pathways.

The web-based tool resembles Adobe’s Illustrator and contains a library of thousands of carefully created “icons,” representing everything from T-cells to lobes of the human brain. It allows users to quickly and easily create modern, scientifically accurate illustrations that look as though they’ve sprung from Jony Ive’s design department at Apple Inc. Illustrations created with BioRender are modern-looking, scientifically accurate and can be produced in a fraction of the time it now takes researchers to come up with visual representations of their work (photo by Chris Sorensen)

Aoki, who holds a master’s degree in medical illustration from Johns Hopkins University and has spent years translating complex scientific information into easy-to-grasp images, including as a lead illustrator for National Geographic, first got the idea for BioRender a few years ago after her Toronto studio was inundated with requests from local scientists.

“The demand was so high that I was having trouble scaling the company and finding high quality talent,” she says.

That’s because trained medical illustrators are relatively few and far between. There are only four schools in North America that offer accredited graduate programs in the field, which requires a rare mix of deep scientific knowledge and a flair for visual design. Yet, while U of T’s Master of Science in Biomedical Communications program happens to be one of the biggest – and the only one of its kind in Canada – it still only produces about 18 graduates a year.

For her part, Aoki recalls feeling like an academic oddball during her undergraduate studies at Queen’s University, where she fought “tooth and nail” with the registrar to take both pre-med and fine arts courses in pursuit of a double major.

“I would often show up in the chemistry lab with paint on my lab coat – or, the reverse, I would show up to an art class with my stack of MCAT textbooks,” Aoki says.

“They all thought I was so strange.”

While Toronto has earned a reputation for being a hub of medical illustration work – thanks in part to U of T’s relatively large program – Aoki says most of the city’s practitioners, including herself, tend to serve deep-pocketed industry clients who can shell out thousands for a custom illustration.

Individual researchers, meanwhile, are often left trying coax passable illustrations out of their laptops or turning to an artistically minded graduate student for help. Aoki says most end up spending hours using clunky programs like Microsoft’s Power Point to produce illustrations of mediocre quality – time better spent in the lab.

“It takes them forever to create, say, an antibody with these little squares and lines in Power Point,” she says.

“I thought there has got to be a better way to do this.”

So did Ryan Marien, who is now BioRender’s head of business development. A fellow Queen’s grad with a background in chemistry, Marien was intrigued when Aoki first approached him with her idea and wondered why biologists didn’t have the equivalent of ChemDraw, a program used by scientists around the world to draw their chemical structures.

“We soon realized that, not only was there no software available for communicating biology visually, there was no standard way of drawing biology to begin with,” says Marien, who has previously been involved with several startups – including a New Brunswick caviar producer targeting high-end restaurants.

“Chemistry, on the other hand, is all standardized. Those carbon lines are drawn the same anywhere you are in the world. Everyone has the same language. The same goes for electrical engineering, where everyone uses the same language for drawing diagrams.” Ryan Marien, who has been involved with several other startups, says BioRender has an opportunity to influence how biological processes are represented by scientists (photo by Chris Sorensen)

That, in turn, creates a potentially exciting opportunity for BioRender.

“There’s not only a need for tools to this,” Marien says, “but there’s an opportunity to start influencing what the standard biological language should be.”

The development of BioRender’s technology was led by Katya Shteyn, a U of T computer science alumna who previously worked as a software engineer. Aoki met Shetyna a few years ago at a Y Combinator female founders event, and was pleasantly surprised when she agreed to join the Biorender team last summer. In addition to being a fellow co-founder, Shetyna is now BioRender’s chief technology officer.

“I thought there was no way she would leave this cushy job at Dropbox in New York and drop everything and move to Toronto,” Aoki says. “But we spoke in May of last year and she really fell in love with the idea.”

The three co-founders formed BioRender last fall and were quickly accepted into Silicon Valley’s Y Combinator accelerator. Upon completion of the program, Aoki says she was strongly encouraged to remain in the Bay Area to build out the company. However, she ultimately decided to return to Toronto to be closer to a burgeoning local startup scene and a long history of excellence in medical research at U of T and its partner hospitals.

“There’s a lot of reasons to come back,” she says. “We’re all from Toronto and we love the city and see a lot of potential for startups.

“The timing is ripe for us to be here.” Katya Shteyn, a U of T alumna, left a software engineering job with Dropbox in New York to help build BioRender in Toronto (photo by Chris Sorensen)

Since returning to Canada in May, Aoki, Marien and Shteyn, as well as the rest of their eight-person team, have been working out of U of T’s ONRamp co-working space for startups. Aoki says BioRender has already amassed nearly 7,000 users on its platform in more than 50 countries.

“What’s really great about BioRender is it addresses an area of gaping need: individual researchers who need to create visual illustrations of their science,” says Nicolas Woolridge, an associate professor and director of U of T’s biomedical communications program, which is offered through the Institute of Medical Science and based mainly at U of T Mississauga.

“This is actually becoming a requirement for some journals. But actually producing these things may require artistic or software skills the researchers simply don’t have.”

While BioRender is currently targeting immunology and microbiology researchers, Marien says the long-term plan is to eventually service all of the bioscience subfields – everything from plant biology to neuroscience.

Ultimately, he says, the hope is BioRender will not only save researchers time and money, but improve the way they communicate complex concepts with each other and the public more broadly. That, in turn, promises to speed up the pace of research and open the door to new discoveries and breakthroughs.

“Our goal is to try to make visual communication in biology a day-to-day event.”