Choirs, planetariums, workshops and more: how U of T's community came together to support new Syrian-Canadians 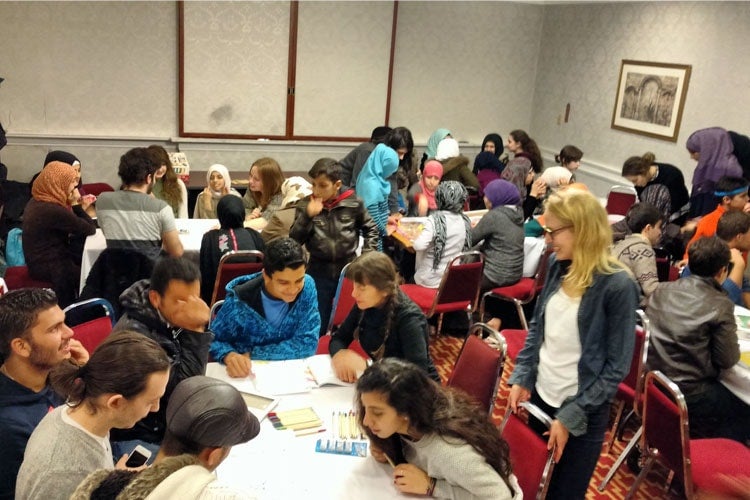 At a cultural exchange workshop, held by NMC-CESI. Photo by Rasha Elendari

“For three years I’ve been thinking of places in Toronto to take my aunts when they come here,” says a U of T student whose two aunts, ages 65 and 68, are living in a refugee camp in Lebanon. When she first started the application for sponsorship three years ago, she thought that she would be reunited with her family members soon, but bringing them to Canada has taken longer than she hoped.

First there were the consultations with a volunteer immigration lawyer supplied by Lifeline Syria, then a lengthy application that was rejected due to a technicality.

So when the student, who wishes to remain annonymous, found out her community at U of T wanted to help, she was exhilarated. With teams from OCAD, Ryerson University and York University, U of T teams (organized by Vinitha Gengatharan director, International Strategy & Partnerships) participated in the Ryerson Lifeline Syria Challenge to sponsor families of Syrian refugees. The Choir! Choir! Choir! team, one of the U of T teams participating in the challenge, started to look into ways that they could reunite the family members. They are now sponsoring her two aunts, who are expected to arrive this summer.

“Understandably, there has been a big emphasis on sponsoring families with small children. Unfortunately, less conventional family structures were having trouble finding matches,” said Ainsley Goldman, placement program coordinator at the Faculty of Kinesiology & Physical Education, who is part of the team, composed of members of the U of T community and beyond. “When we heard about this case, it resonated with us right away.” Many who participate in Choir! Choir! Choir!, an open choir based in Toronto, joined to find a sense of community in the city. Goldman and her team members wanted to extend that community to Syrians who are seeking refuge. That story is one of many U of T initiatives that support Syrian refugees here and abroad. In another part of the university, U of T students, faculty members and new Syrian-Canadians worked together to build a thriving community.

For Rasha Elendari, one of those students and a PhD candidate in the department of Near and Middle Eastern civilizations at the Faculty of Arts and Science, supporting refugees from Syria struck a personal chord. She came from Syria to study in Canada on a student visa.

The group also collaborates with faculty members like Jens Hanssen, Timothy Harrison and Ito Peng, to host events to raise awareness on the issue and fundraising campaigns. And while they are collaborating with other groups across the university on various initiatives, their significant impact lies in a series of free workshops.

Imagine moving to a new place. You don’t speak the language, or know anyone in your new city. That’s a challenge that many Torontonians, who are immigrants themselves, understand. The challenge becomes much harder for refugees who have narrowly escaped a war zone, may have not had a home for years, or whose children have not received health care services or an education. Then imagine the language and cultural barriers. Regular meetings with a group of friendly faces, many who speak Arabic, to discuss the culture and customs in Canada are invaluable.

That’s what happened each Friday over a few weeks, when a group of student volunteers from NMC-CESI met with a group of new Syrian-Canadians. Sometimes they talked back and forth in Arabic, or other times in English. At times the volunteers provided practical advice, such as how the TTC system works or where to buy fresh groceries. Other times they listened to each other’s stories, or enjoyed a stress-managing activity like colouring books.

It’s an experience that had as much of an impact on volunteers as on participating recent Syrian immigrants. “Our volunteers always want to come and help out, even at exam time, says Elendari. “They’ll tell me that volunteering here is one of the most important things that they are doing.”

“I remember walking in there and there was a bunch of really young children in the lobby who ran up to my friend and me, and screamed, ‘I love you Canada’,” said third year student Hania Hameed, who volunteered at the workshops. “It is a very small thing, but considering the fact that these newly arrived families left everything behind, and seeing them feel comfortable in a new location really made our hearts melt.”

Alizee Zapparoli-Manzoni-Bodson, a student leader within NMC-CESI also felt the impact of the sessions.  “At our second workshop I met a 19-year old man who had lived in Eastern Turkey for over two years. He worked as a baker and his Turkish was brilliant,” she said. “Meeting this 19-year-old who while in Turkey became fluent in Turkish and even picked up a trade as a baker was quite inspiring and a powerful sign of resilience.” Now, with the support from the Faculty of Arts and Science, NMC-CESI will start a new series of workshops in a couple of weeks.

U of T students from all faculties also volunteered through four different committees affiliated with Lifeline Syria (education, employment services, communications, and fundraising), while others helped through existing resources at U of T, such as the Legal Aid Clinic, or through groups such as Canadian Centre for the Responsibility to Protect, Oxfam at U of T and U of T Refugee Alliance. Many were active through committees based in their college community.

And many more were inspired to get involved by their studies, like a group of astronomy graduate students who used their fascination with the stars to support Syrians living in a war-zone halfway across the world. The students held planetarium fundraising events that explored the astronomical ideas of the Islamic Gold Age and the modern discoveries to which they are connected.

“The audience journeyed through the cosmos to see a binary star sunset on a distant exoplanet and watched a star explode as a supernova,” said astronomy students Pegah Salbi and Jielai Zhang.

The students were supported in their initiative by the department of astronomy and astrophysics and the Dunlap Institute for Astronomy and Astrophysics. Elsewhere at the university, faculty members and staff raised awareness on the issue or sponsored Syrian families.

At the University of Toronto Scarborough, every year the department of student life and the Scarborough Campus Student Union support one refugee student. They are now working with the office of the vice-president and principal to sponsor a second refugee student through World University Service Canada.

At the University of Toronto Mississauga, people connected to the issue have been supporting Syrians in Canada and abroad, like Syrian-Canadian student Rose Al-Mayaleh who is volunteering with the Starfish Foundation, to help Syrian refugees in Lesvos, Greece until August 2016.

What is life like for sponsored Syrians after immigrating to Canada? UTM professors Jennifer Nagel and Sergio Tenenebam led UTM’s Room for More, a team that sponsored a Syrian family earlier this year. “They’ve been very cheerful and brave about everything, although I’ve realized that arriving in a new country invites all kinds of hassle, especially for refugees,” said Nagel.

As for the next big steps for Room for More, Nagel says that she wants to bring other members of the family to Canada.  “We would love to get them apartments really close to the family already here.”

Nagel also says that the oldest of the five, who is 22, would like to get a part-time job. “Part-time [work] makes sense for now because he really needs to work on his English, as does his mom. We’re hoping she will gain confidence to start looking for work later this year. It’s a big step for her because she hasn’t worked outside the home before.”

Members of U of T’s medical community approached the issue from a healthcare perspective. Professor Meb Rashid heads the Crossroads Clinic at Women’s College Hospital, the first hospital-based refugees’ health clinic in Toronto, providing vital services to Syrian refugees. Rashid “has put out a call” to private sponsorship groups to make them aware of the clinic’s services. “I hope people will commit to primary care very quickly,” Rashid told U of T News at the end of last year. Read more about Crossroads Clinic.

Other U of T doctors, such as Perle Feldman, Ben Langer and Mike Evans worked on enabling more access to health-care for new Syrian-Canadians. Read more about their efforts here.

To create more opportunities for learning and mobility, the Scholars at Risk program at U of T was expanded. The program, housed at Massey College, offers support to academics and graduate students, like Farai Gonzo, who have fled conditions of political oppression in their homeland.

The Scholars-at-Risk program has a new bursary for refugees who have had their educations disrupted by conflict or war, with a goal of creating a $1-million fund supporting 100 bursaries of $10,000 each, awarded over the next 10 years.

To support the initiative, the university is committed to match (1:1) up to $500,000 donations of any size. The bursaries will go to undergraduate and graduate students with refugee status in Canada, with a focus on Syrian students at risk to start.

Back at the end of last year, staff and faculty in attendance at the Simcoe Hall Holiday Party pitched in at a silent auction, with all funds going to the Scholars at Risk program. The president, vice-presidents, chancellor and chair, staff members and invited guests who supported them contributed $8,156, the largest donation yet in support of the initiative.

Staff, faculty, students and other members of the U of T community who want to support new Syrian-Canadians can donate to Scholars at Risk or volunteer for existing support groups.

Efforts to support new Syrian-Canadians at U of T are constantly expanding. While it was impossible to mention all efforts happening across three campuses here, we want to hear about current and upcoming initiatives at U of T for a possible future story. Email information on initiatives and events, volunteer requests, or questions to Vinitha Gengatharan at vinitha.gengatharan@utoronto.ca and Irene Aiello at irene.aiello@utoronto.ca, and copy bulletin@utoronto.ca.