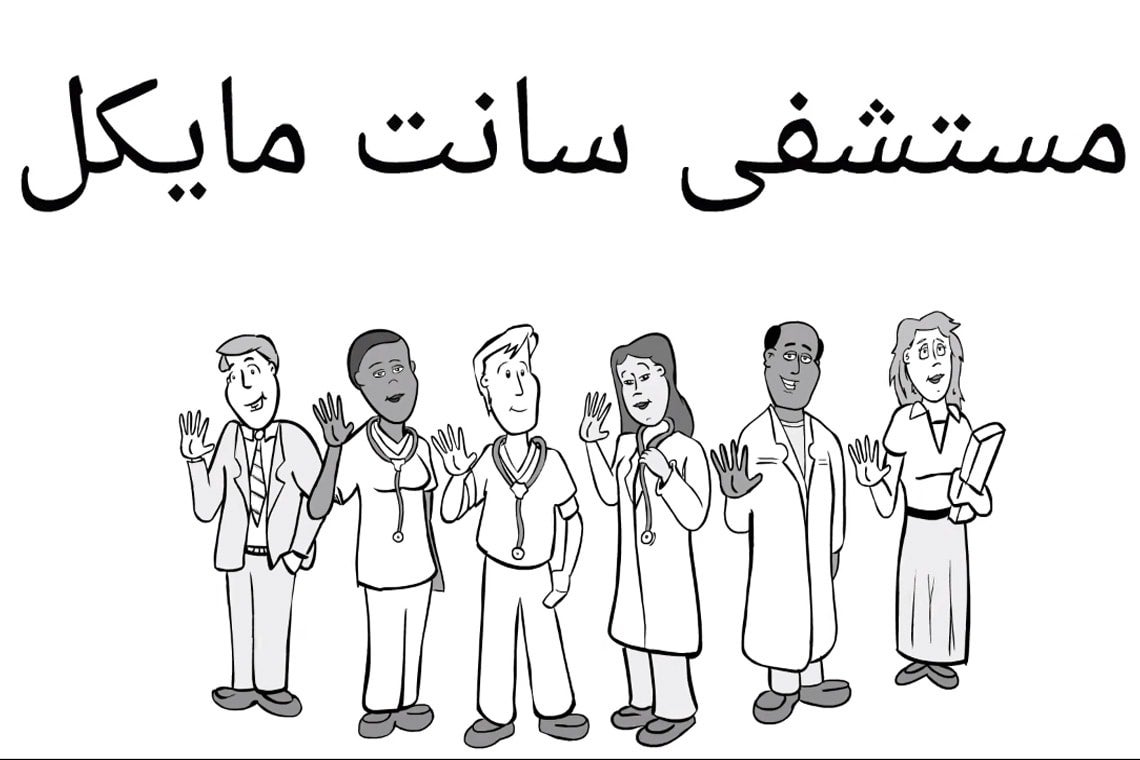 A new, Arabic-language whiteboard video from U of T's Dr. Mike Evans, star of YouTube, explains how to access health services in Canada (scroll down to watch the video)

When family doctor Perle Feldman heard she would be seeing a recently arrived Syrian refugee with cancer, she knew she would have to act fast.

The man had been undergoing treatment in Beirut, Lebanon after moving there from a refugee camps, but he desperately needed surgery.

“By the time he had arrived in Canada he already had undergone two to three more cancer treatments than he should have – he was weak,” says Feldman, a professor in the department of family and community medicine (DFCM) at the University of Toronto.

“He was on the plane Thursday night and I saw him Friday afternoon – it was quick.”

Feldman, a family physician at North York General Hospital, completed the initial physical exam and immediately called Princess Margaret Hospital. She was able to get to the right surgeon almost immediately. Within five days of arriving, the patient was finally able to start proper treatment.

“I didn’t do anything for my Syrian refugee patient that I wouldn’t have done for a Canadian patient, but if he had been living in Canada he would have received proper and faster treatment from the beginning,” said Feldman.

Though extreme, stories like this show the need for refugees to see a family physician for a general exam after arriving in Canada. While refugees are screened for infectious disease overseas, underlying medical conditions and chronic diseases may be missed.

Meb Rashid, a professor in DFCM and a family physician at Women’s College Hospital who is leading the primary care response to Syrian refugees in Toronto, came up with a solution. By coordinating with various family medicine health teams across the GTA, Rashid and his colleagues have developed rotating intake clinics where refugees can be seen by family physicians for an initial assessment.

“We knew much of the health concerns we were going to see in this population were typical garden variety primary care – diabetes, obesity, women’s health issues, and the like – so it was essential to get as many primary care workers on board as possible,” says Rashid (pictured below). “The response to our requests was really incredible – many family doctors and health-care professionals have donated time and expertise to these clinics.” Rashid and his network have also connected with other health professionals, including paediatricians, psychiatrists, dentists and others, to ensure smooth referrals for further treatment.

“As with any newcomer population, it’s best for everyone to ensure that they’re seen as quickly as possible to ensure there’s no health threats the general public, however unlikely, and then determine whether they need to be referred elsewhere,” says Rashid.

Ashna Bowry, professor at DFCM and a family physician at St. Michael’s Hospital Academic Family Health Team, is leading the research on the health of Syrian refugees.

“Right now the research is being broken up into smaller areas of interest, such as their demographics and prevalence of diseases such as heart disease or women’s health issues that will be led by family medicine residents” says Bowry. “It’s not only a great opportunity for our residents to do meaningful research, but reinforces the importance primary care in general.”

Initially, it was taking longer than hoped for newly arrived refugees to connect with the network of clinic. Family medicine residents, led by Dr. Ben Langer and colleagues, began to do targeted outreach to private sponsor groups, both online and by attending meetings and fairs, to raise awareness of the clinics. The effort has resulted in a much higher number of visitations: around 200-250 refugees have visited for examinations over the last ten days.

“Residents and students are also visiting hotels where many government-refugees are staying until more permanent housing can be found,” says Rashid. “There was a bottleneck at many of these hotels – they’re dealing with many other logistics – but we’re beginning to see that dissipate as we help facilitate their care.”

“They’re just finding their feet here,” explains Bowry. “It’s cold, it’s snowing, they need to find jobs and housing, get their kids to school, so their health might not be their highest priority. But we need to get the message out that it should be – just because they may not have an obvious health condition doesn’t mean there isn’t one there and the quicker we see them, the better for everyone.”

Bowry and DFCM faculty member and YouTube star Mike Evans have also collaborated on an innovative way to communicate to refugees at their initial visit to the clinic at St. Michael’s Hospital: a whiteboard video to show refugee patients that welcomes them and explains what they will undergo while at the clinic.

“We are your first point of contact with the health-care system, and we’re here to help work with you in navigating this system to get the care that you need,” says the video in Arabic before going on to explain that they will undergo a physical exam and will be referred to specialists if necessary.

See the video below: