From cars to cannabis: U of T kicks off international research collaboration on 'traffic' in urban spaces 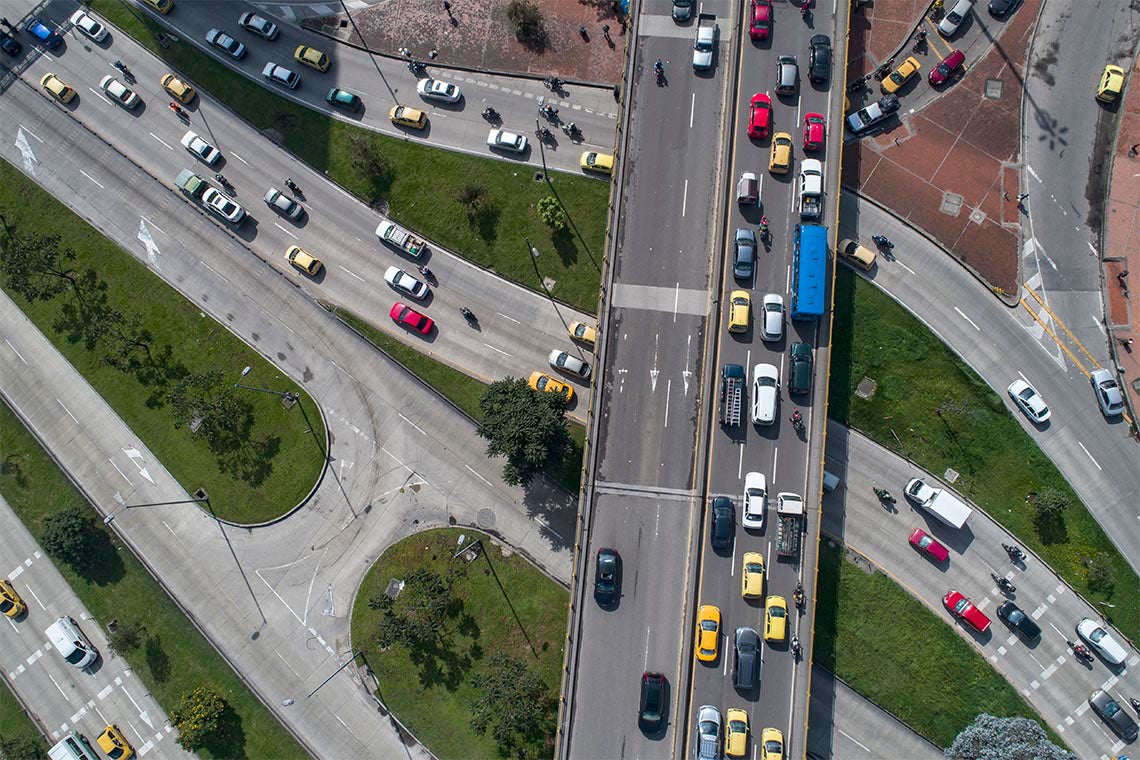 A drone shot of highway traffic in Bogotá, where the Universidad de los Andes – one of the four partners in the international research collaboration – is located (photo by Stephan Zirwes via Getty Images)

Whether it’s the movement of cars and trucks or illicit goods, the theme of “traffic” holds a central place in contemporary urban life. Now, a new international research collaboration aims to explore the multiple meanings of traffic and the related issues it raises: urban planning, public transportation, displacement, infrastructure, the divide between centre and periphery, poverty, racial segregation, the drug trade and more.

Traffic in the Americas is a partnership between the University of Toronto’s Centre for Diaspora & Transnational Studies (CDTS), University of California, Los Angeles’s Institute on Equality and Democracy, the Centro Interdisciplinario de Estudios sobre Desarrollo at the Universidad de los Andes in Bogotá and the Latin American and Caribbean Centre at the London School of Economics (LSE).

The four-year research collaboration begins April 26 with a workshop on traffic at U of T, with subsequent meetings planned in following years for Los Angeles, Bogotá and London.

U of T’s Jovana Jankovic spoke with Kevin Lewis O’Neill, director of the CDTS and a professor in the department for the study of religion, about how this international collaboration came together, what he hopes it will achieve and why “traffic” is a particularly pressing theme today.

How did you set this research collaboration in motion? What were some of the early discussions?

Some of the early ideas emerged while I was working on one of my current book projects. It’s on traffic in Guatemala City. I was also inspired by the idea that urban studies is really grounded by three public institutions: U of T, LSE and UCLA.

We had Jane Jacobs in Toronto, for example. Edward Soja spent time between LSE and UCLA. And they are two of the dominant intellectual architects of urban studies, of understanding public transportation and the organization of cities. So, we thought: what if we marshalled the considerable intellectual resources of these three classic institutions?

Of the current participants, Austin Zeiderman of LSE is one of my longtime collaborators. And Ananya Roy of UCLA is a supremely established and exciting scholar who was quick to get on board. She’s the director of UCLA’s Institute on Inequality and Democracy, which studies racial segregation and the policing of Los Angeles.

Every workshop in this collaboration will have its own interpretation based on its location. For example, at next year’s meeting in Los Angeles, the intersecting themes will be around the policing of racialized communities and the ways in which low-level drug offences segregate populations. The workshop in Bogotá will address road congestion, but also Colombia as ground zero for drug trafficking.

The response to this collaboration from students and colleagues has been overwhelming. It seems traffic has been an intuitive point of interest for a lot of people. And our SSHRC (Social Sciences and Humanities Research Council) Partnership Development Grant has been integral to this project. That SSHRC is willing and ready to fund an extended thought experiment is, I think, fantastic. They’ve provided the platform for other units and other people to contribute in significant ways.

In addition to the established scholars participating, what do you hope other – perhaps younger – scholars, students or attendees will contribute or get out of this workshop?

For one thing, I’m secretly hoping there’s a moment of catharsis.

Perhaps students and community members will talk about the snow day we experienced this past winter, when students who often commute two hours a day couldn’t attend their classes. That’s an issue of traffic, an issue of infrastructure and an issue of access to education.

Students in one of my seminars a few years ago were eager to talk about infrastructure and public transportation, and why Rob Ford – Toronto’s mayor at the time – championed the suburbs. So, U of T students have an intuitive grasp of these issues. I think they can contribute both as locals and as young scholars.

Second, I hope we’ll do some intellectual work here in Toronto so that next year in Los Angeles we’ll have an even clearer sense of our intentions when we talk about traffic.

Why do you think looking at traffic is a pressing issue now?

What does it mean when the rhythm of everyday life is continually stalled? That’s a powerful point for philosophical and theoretical reflection about what we call “the contemporary,” and this leads us to conversations about infrastructure like roads, as well as technology like cars. But it also leads us to different kinds of traffic. The legalization of cannabis, for example, does not push all drug sales into the licit market, and Canada is struggling now with higher rates of incarceration because of illicit cannabis sales. Obviously, our colleagues in Bogotá have had generations of scholarship on the effects of drug trafficking.

My own research as an anthropologist has been on Guatemala City for the last 20 years, where the number of cars has quadrupled and the infrastructure has stayed the same. And Guatemala is a transit country for drugs – 85 per cent of the cocaine produced in the Andes travels through Guatemala, which has obviously had a tremendous impact on the region.

The four cities in this collaboration –Toronto, London, Los Angeles, Bogotá – have notoriously terrible traffic. Transport studies have found that Bogotá has hands-down the worst traffic in the world. And obviously, L.A. and Toronto have their own issues. When my students talk about their principal struggles with living in Toronto, it often has to do with traffic, infrastructure and commuting. We all have this shared experience across the hemisphere.

So, how can traffic bring together otherwise divergent scholars who have this common point of reference, both in their scholarship and their everyday life? That’s what we hope to explore.