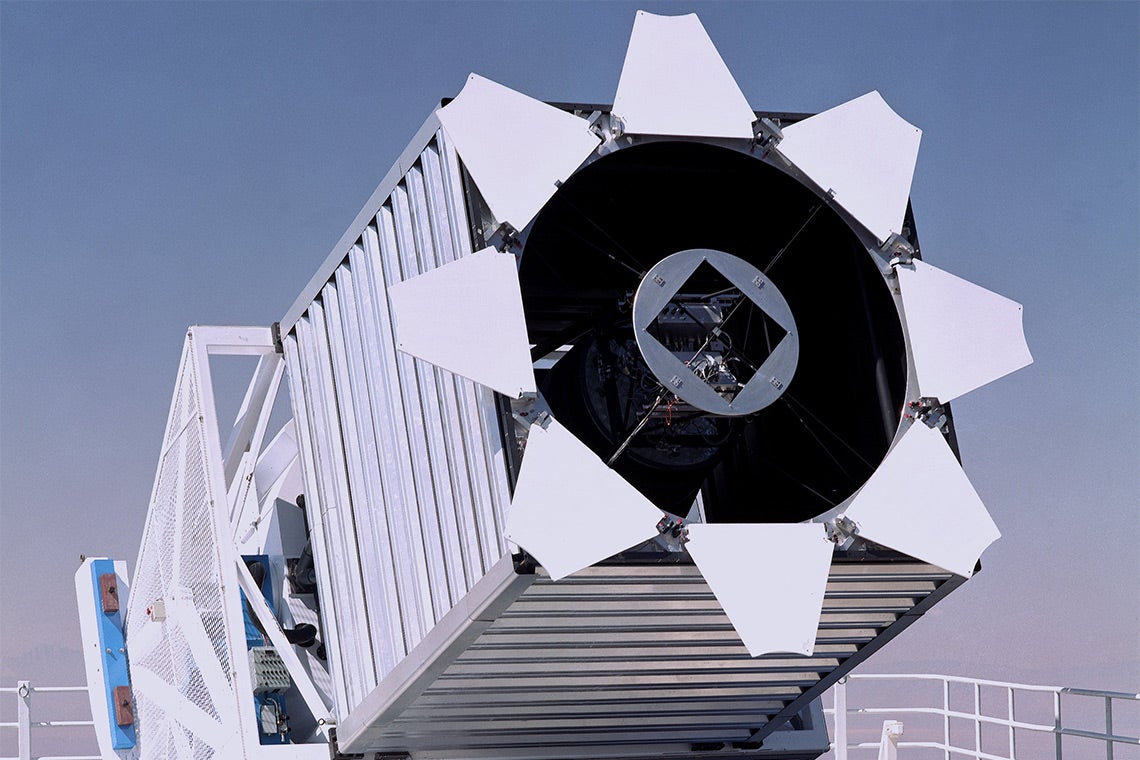 The Sloan Foundation 2.5-metre telescope at Apache Point Observatory in New Mexico is one of two sites to use a new Focal Plane System to study the Milky Way (photo courtesy of Fermilab Visual Media Services)

Thanks to a breakthrough robotic innovation, an international collaboration that includes the University of Toronto has advanced the Sloan Digital Sky Survey (SDSS), a 20-year-long research project that has been investigating the structure and evolution of our cosmic home, the Milky Way galaxy.

A new Focal Plane System (FPS) is at the heart of the fifth phase of the project, dubbed SDSS-V. The system replaces a time-consuming, hands-on approach to making simultaneous observations of hundreds of stars that required astronomers to manually plug hundreds of optical fibres into holes drilled into a metal plate in the focal plane of a telescope.

With this new innovation, the system’s 500 robotic positioner units replace human hands and precisely maneuver optical fibres into position in the telescope’s focal plane so that each can gather the light of a specific star within the target area.

“We are going from collecting a few thousand spectra per night to nearly 15 thousand,” says Juna Kollmeier, director of SDSS-V, the fifth phase of SDSS, and director of U of T’s Canadian Institute for Theoretical Astrophysics (CITA).

“It's a fantastic change in how we operate that will not only allow us to survey more objects, but to probe these systems over time, on timescales we couldn't access previously. This opens up a tremendous wealth of new science.”

In addition to Kollmeier, other U of T astronomers involved in SDSS-V include Associate Professor Jo Bovy, Assistant Professor Maria Drout and Assistant Professor Ting Li – all of the David A. Dunlap department of astronomy and astrophysics in the Faculty of Arts & Science – and Ted Mackereth, a Banting-Dunlap-CITA post-doctoral fellow.

“I run massive calculations about the Milky Way galaxy,” says Mackereth. “At the end of the day, I want to test these ideas and SDSS-V will be a key way to do that.”

“SDSS has been an important testbed for some of the most exciting advances in machine learning,” adds Bovy, whose early work in previous phases of SDSS pioneered techniques for age-dating in the galaxy. “Using these techniques, we are able to get ages for millions of stars – something we didn't think was possible when SDSS began."

Drout, meanwhile, is one of the leaders of the Time Domain effort in SDSS-V. She and her collaborators will use the spectra statistically to probe the ways in which astrophysical objects change in time. 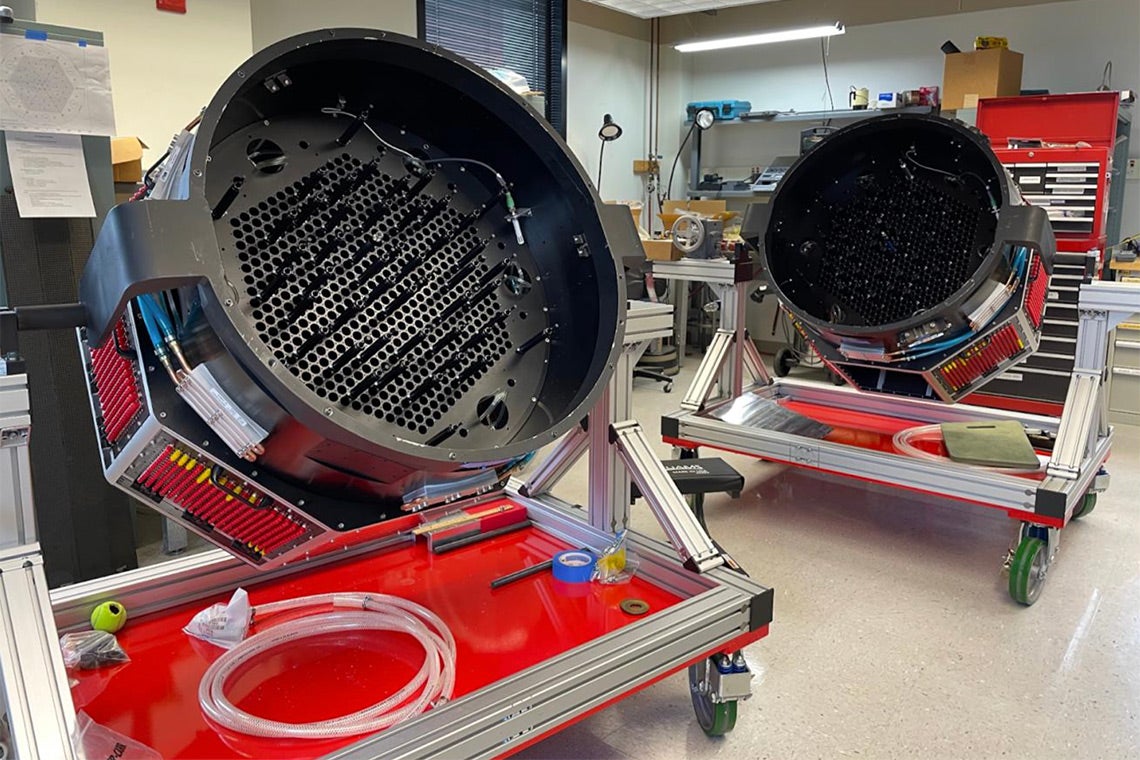 The development of the new robotic FPS was a five-year effort by an international team, including Ohio State University’s Imaging Sciences Laboratory, the University of Washington, École Polytechnique Fédérale de Lausanne (EPFL) and the Carnegie Observatories in Pasadena.

The design teams overcame numerous challenges posed by the global pandemic by developing and constructing components wherever they were – some in their own garages and backyards – and shipping them elsewhere for further assembly. The robots were built in Switzerland and integrated into the main mechanical units in Columbus, Ohio.

There are two FPS units. One is in operation on the Sloan Foundation 2.5-metre telescope at Apache Point Observatory (APO) in New Mexico. A second unit is under construction and when complete, will operate on a telescope at the Las Campanas Observatory in northern Chile. (At the Las Campanas Observatory in 1987, U of T astronomer Ian Shelton was one of the two observers to first see Supernova 1987A, an exploding star in the Milky Way galaxy’s companion galaxy, the Large Magellanic Cloud.)

The FPS will enable two of the three core science programs in SDSS-V: the Milky Way Mapper (MWM) and the Black Hole Mapper (BHM). Together, these projects will collect data from millions of objects spread across the sky, from stars in our own galactic backyard to unimaginably distant supermassive black holes.

The MWM will study our home galaxy in unprecedented detail. It will take advantage of our unique perspective within the Milky Way to create a high-resolution map of the galaxy’s stars and how they are moving.

The MWM will also measure masses, ages, chemical compositions, the presence of companions and a slew of other properties for vast samples of stars of all types – including hot massive stars, stars that are just forming and the white dwarfs that are dead remnants of stars like our Sun. It will also target tens of thousands of multi-star and planetary systems in order to understand how often multi-companion systems form and what determines how they are structured.

Looking farther afield, the BHM will study quasars, which are among the most luminous objects in the universe. Powered by material flowing into supermassive black holes at the centres of galaxies, quasars can be used as beacons to trace the growth of these titans over cosmic time. SDSS-V will collect data on more than 300,000 quasars to measure the masses of their black holes, understand the physics of how they gobble up matter and trace their growth over many billions of years.

These vast samples of strikingly different types of targets – millions of Milky Way Galaxy stars, hundreds of thousands of distant quasars – are among the key aspects that set SDSS-V apart from other surveys and are enabled by the new FPS system.

“This project has been truly collaborative, involving the contributions of scientists at more than 50 institutions from around the world,” says Kollmeier.

“We are thrilled to have reached this technological milestone despite being in the midst of a global pandemic and are excited to witness how this shift will enhance the work of the project.”

With files from SDSS