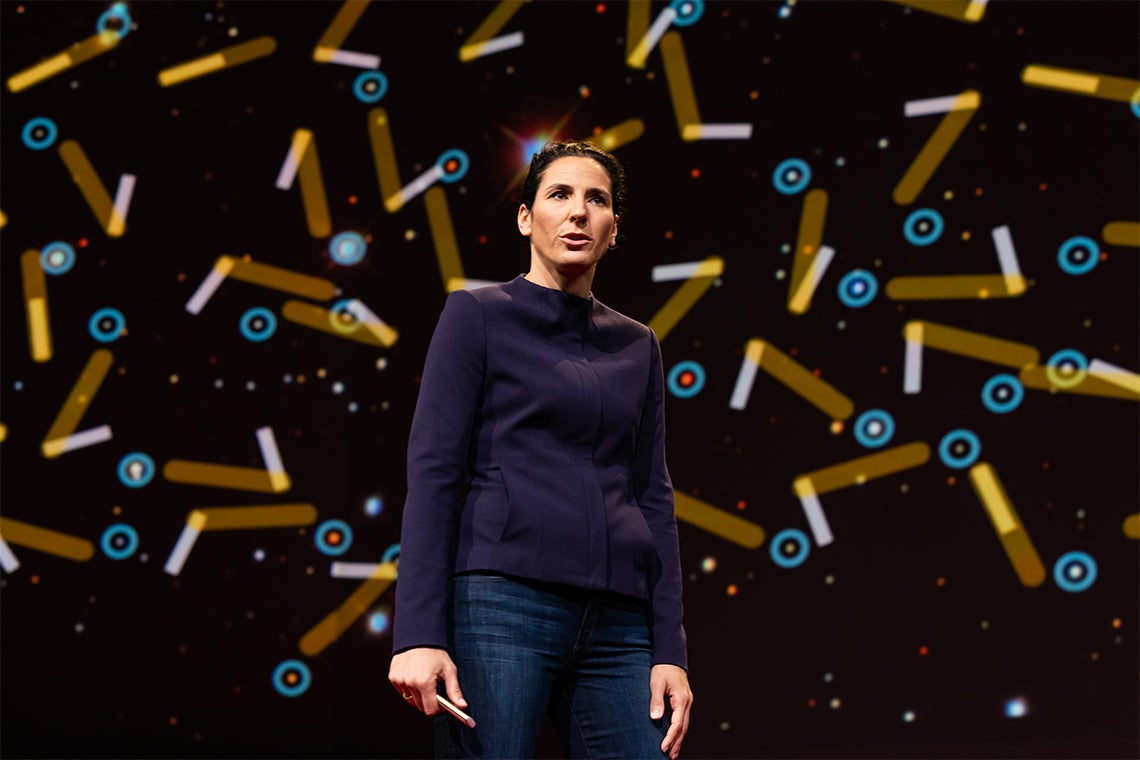 Juna Kollmeier, who will become the new director of CITA on July 1, is an observationally oriented astrophysicist whose research focuses on supermassive black holes, the Milky Way and the intergalactic medium (photo by Bret Harman/TED)

Renowned astrophysicist Juna Kollmeier, on faculty at the Observatories of the Carnegie Institution for Science, has been named the new director of the University of Toronto’s Canadian Institute for Theoretical Astrophysics (CITA), a research centre focused on the origin and evolution of the universe and other phenomena discovered by modern astronomy.

An observationally oriented theorist – uncommon in astrophysics – Kollmeier is the founding director of the Carnegie Theoretical Astrophysics Center and director of the Sloan Digital Sky Surveys (SDSS-V). A scientist committed to public outreach and the “inalienable right to physics” for everyone, she studies how structures grow and evolve in the universe, and focuses on supermassive black holes, the Milky Way and the intergalactic medium. Her 2019 TED Talk has attracted more than 2.6 million views and, among other documentaries, she was in an episode of the series Genius by Stephen Hawking.

“I am thrilled to welcome Juna Kollmeier to the University of Toronto to take on this important leadership role,” says Melanie Woodin, dean of the Faculty of Arts & Science, which is home to CITA. “This appointment is truly an outstanding ‘brain gain’ for Canada. An impressive scholar, passionate scientist and mentor, she is also brilliant at engaging the public in understanding our universe. She will undoubtedly advance CITA’s remarkable research and novel discoveries in astrophysics and cosmology to new frontiers.”

Kollmeier’s appointment is the result of a comprehensive, global recruitment process and underscores the university’s commitment to diversifying leadership across disciplines. When she begins on July 1, 2021, Kollmeier will be the first woman to lead CITA.

“CITA is Canada’s hub for research and discovery in theoretical astrophysics,” says Kollmeier. “It's been a tremendous global force, has contributed to cosmology, to our understanding of black hole growth and evolution, to star formation and to high energy astrophysics. I think U of T shines brightly as a place where excellence thrives and grows. This is an incredible opportunity to lead an incredible organization.”

Kollmeier holds a bachelor of science in physics with honours from the California Institute of Technology, and a master of science and PhD in astronomy – both from The Ohio State University, where, in addition to her thesis work, she designed, built and deployed instrumentation parts for two telescopes as part of the Ohio State Astronomy Instrumentation Lab team. She was an Institute for Advanced Study Visiting Professor in 2015-16 and a Fulbright Scholar, and received Hubble and Carnegie-Princeton Fellowships. She is a CIFAR Fellow and, most recently, has been selected the 2022 International Solvay Chair in Physics.

“She is an exceptional scientist, mentor and collaborator,” says Norman Murray, current director of CITA. “I'm excited that she will help advance our mission to expand Canada’s capacity in theoretical astrophysics and grow our national and international networks, as our post-doctoral fellows go on to teach and innovate at many other leading universities.”

Kollmeier replaces Murray, who is completing his third term as director. She says she is looking forward to joining an extraordinary community of scholars at U of T this summer.

“We are arriving at an incredibly exciting point in the overall history of astrophysics, where we have these rich datasets. And they allow us to explore a variety of deep questions, all open questions that are on the verge of breaking apart,” she says. “Joining this community will take my own research to the next level, and that's tremendously exciting.”

Ted Sargent, U of T’s vice-president, research and innovation, and strategic initiatives, says Kollmeier is a globally celebrated scholar.

“Her appointment exemplifies the outstanding calibre of researcher U of T continues to attract,” Sargent says. “Under Professor Kollmeier’s leadership, CITA will continue to achieve transformative discoveries, build national and global networks, and will continue to advance as one of the world’s leading theoretical astrophysics research hubs.”

U of T alumna Wendy Freedman, an astrophysicist at the University of Chicago, hired Kollmeier as the first theorist at the Observatories of the Carnegie Institution for Science, when Freedman was its director.

“Juna is remarkably bright and enthusiastic about whatever she does, and it's hard not to get caught up in her infectious enthusiasm for whatever problem she’s working on,” says Freedman. “She's unusual in that she has a real interest in observations, not just the theory. And she chooses projects that interface very well with what observers are doing, and what you can learn from the observations. It's a great niche area where she can bring together groups of theorists and observers to initiate new projects that can benefit from that kind of analysis. I was delighted when I heard the news. It struck me as a really good match.”

“Juna is very knowledgeable and knows lots of people,” says colleague Matias Zaldarriaga, a cosmologist at the Institute for Advanced Study. “And I think that's a very good combination for someone leading CITA, to recruit and attract people with a wider range of research topics, and to create an atmosphere where people can collaborate and learn new things. She will bring this breadth of interest and expertise that I think will be very noticeable and very attractive to a lot of people.”

Hans-Walter Rix, director at the Max Planck Institute for Astronomy in Heidelberg, Germany, has known Kollmeier since her time at graduate school. “Even back then it was very obvious she just was in a different category than most grad students,” says Rix. “This is a fantastic appointment for CITA because I think it is a role that fits her ambitious capabilities. She brings a vision and an energy that will be a tremendous boost for the place.”

As the first woman to lead CITA, Kollmeier will have a formidable impact, says McGill University’s Victoria Kaspi, physics professor and director of the McGill Space Institute.

“I think she'll be a tremendous role model and a mentor to the next generation of women in astrophysics and in STEM in general,” says Kaspi. “In addition, she also is an incredibly creative, versatile person, and she has tremendous energy and drive. I think she is going to shake the place up and bring CITA to new heights.”

Meg Urry, director of the Yale Center for Astronomy and Astrophysics, and a former president of the American Astronomical Society, says she has seen “Juna’s impressive leadership up close.” Urry serves on the executive committee of the advisory council of the SDSS-V project. “That she is a distinguished theorist selected to lead this important institute – well, it shows Juna is a star on all fronts.”