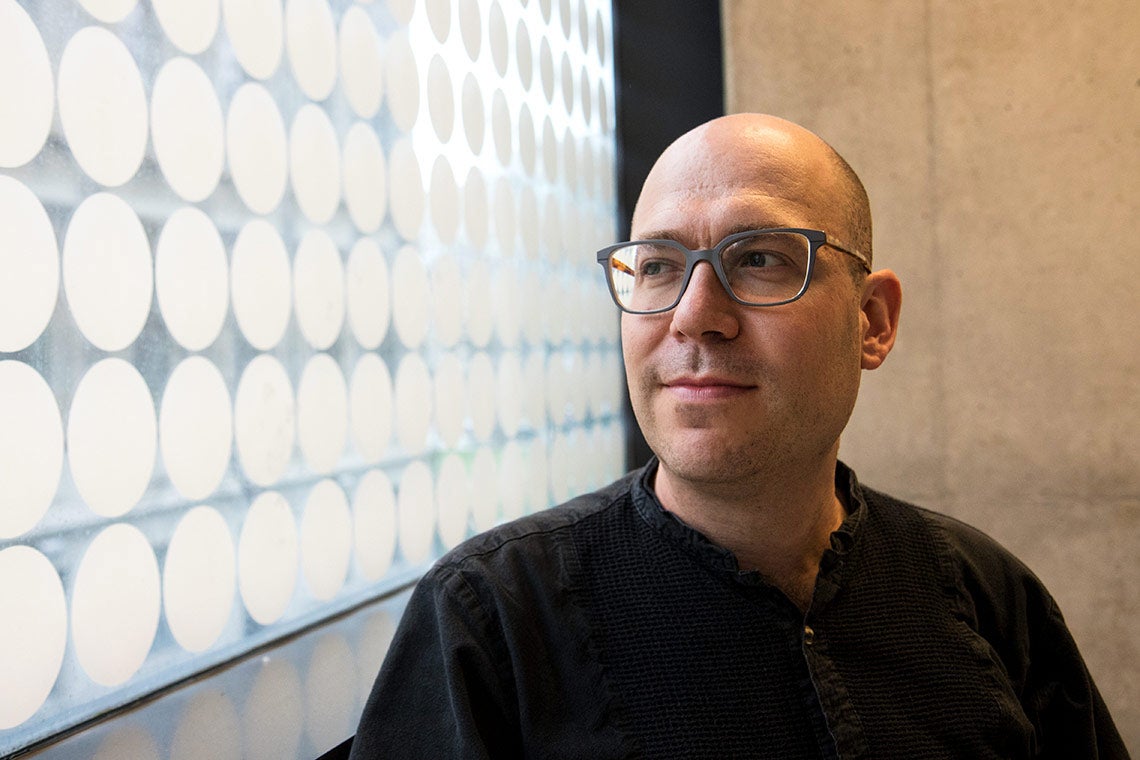 Alán Aspuru-Guzik, who decided to leave Harvard for U of T, delivered the keynote address at this week's University of Toronto-Tsinghua University Entrepreneurship and Innovation Forum (photo by Chris Sorensen)

The ability of artificial intelligence – and deep learning algorithms in particular – to recognize images has created much excitement in recent years, sparking a race to develop everything from self-driving cars to robotic assistants.

But Alán Aspuru-Guzik believes the mix of AI and chemistry could ultimately be even more important.

The former Harvard University researcher, who is joining the University of Toronto’s departments of chemistry and computer science this summer, explained to a packed auditorium at the Leslie Dan Faculty of Pharmacy this week his vision of a “self-driving” laboratory, which can be used to develop new materials for applications ranging from smartphone screens to advanced battery technologies.

“I use AI to classify molecules into good or bad, and I use AI to dream [up] molecules and to control problems – to pick what is the next best experiment to do,” he said.

“In a sense we’re doing the same thing for molecular structures that people have done for pictures of animals and cats – we just believe that the molecular advances are more useful for humanity than the images.”

Aspuru-Guzik, a Canada 150 Research Chair and a faculty member at the Vector Institute, made the remarks following a keynote address at the University of Toronto-Tsinghua University Entrepreneurship and Innovation Forum, a two-day conference focused on AI that began Thursday and is a collaborative effort between U of T and Beijing’s Tsinghua University.

Why Alán Aspuru-Guzik left Harvard for U of T

Though U of T and Tsinghua have been collaborating on education and research for nearly 15 years, the joint conference is a first for the two institutions and aims to boost the potential for innovation and entrepreneurship by reaching across borders.

“The biggest challenges of our time need to be solved by collaborating around the globe,” said Professor Hong Gao, Tsinghua’s vice-provost. Bill Simpson, the medical science liason for U of T startup WinterLight Labs, answers questions at the AI innovation and entrepreneurship conference (photo by Chris Sorensen)

There were also several representatives from research-based startups, including China’s 100Credit, which provides big data services to financial institutions, and Beijing DeePhi Tech, which aims to increase the efficiency of AI software and hardware.

Albert Yoon, a professor in U of T’s Faculty of Law, spoke on Thursday about his involvement with Blue J Legal, which uses AI to help predict the outcome of tax and employment law cases.

“The economic model of these large law firms is starting to transition,” Yoon said, adding that AI applications promise to make the process of delivering legal services both faster and cheaper.

Meanwhile, Bill Simpson, the medical science liason for WinterLight Labs, co-founded by Rudzicz, offered a brief presentation on the startup’s use of AI to track speech patterns and analyze it for early signs of dementia.

Like most of the researchers at this week's conference, Aspuru-Guzik is no stranger to the startup world. He's involved with two different companies – Zapata Computing, which aims to develop chemistry software for use on quantum computers, and Kebotix, which he described as “a chemical company for the 21st century.”

“I think exploring the chemical space will be a very profitable thing,” Aspuru-Guzik said. “So if you see me driving a Tesla in a couple of years, you will know that I’ve succeeded.”