An activist and PhD student, Niloofar Ganji is making her mark in the lab – and on the streets 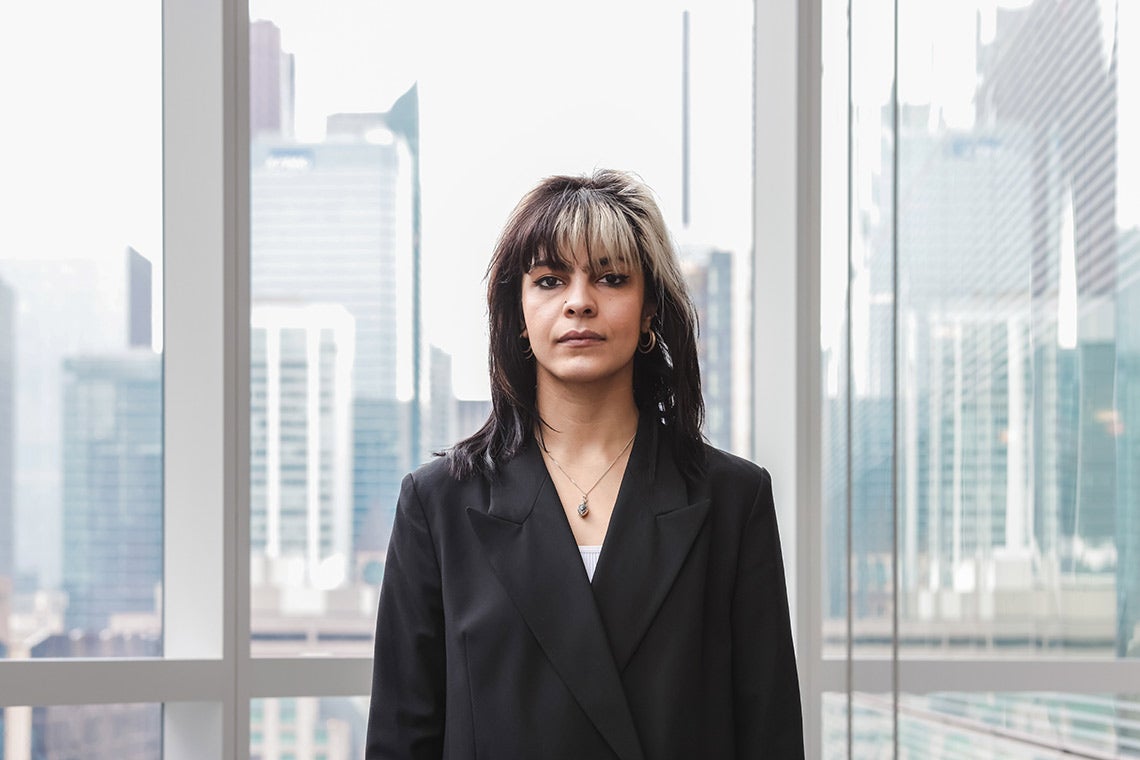 When Niloofar Ganji isn't conducting research in a lab at The Hospital for Sick Children (SickKids), she is organizing events at the university in support of the anti-regime movement in Iran (photo by Polina Teif)

Niloofar Ganji works inside one of the largest child health research towers in the world – a position of privilege that’s never far from her mind.

A PhD student at the University of Toronto, Ganji says she thinks of friends in her home country each time she steps inside the elevator that whisks her to her 10th-floor lab in the Peter Gilgan Centre for Research and Learning at The Hospital for Sick Children (SickKids).

“I don’t take this opportunity for granted because I know a lot of my friends in Iran deserve to be here – but don’t have the chance to be,” she says.

An accomplished scientist who is passionate about helping others, Ganji’s research focuses on Necrotizing Enterocolitis (NEC), a complicated intestinal inflammatory disorder that’s prevalent in premature newborns.

“Science-wise, it’s an interesting mystery,” said Ganji who is completing her PhD at the Institute of Medical Science in U of T’s Temerty Faculty of Medicine.

“It’s also a disease that is in dire need of a new treatment.”

Ganji has made important contributions to NEC research since joining the lab of Agostino Pierro, a senior associate scientist at the SickKids Research Institute, in 2016. That includes being co-first author on a paper, published in Nature Communications, that showed how a bedside intervention called remote ischemic conditioning (RIC) may improve the outcomes of infants with the disease.

“Dr. Pierro has been extremely supportive and he’s an inspiration,” Ganji says of her PhD supervisor, who is also a professor of surgery and physiology at the Temerty Faculty of Medicine. “Being able to contribute to the work he does and learning from him is something I do not take for granted.” 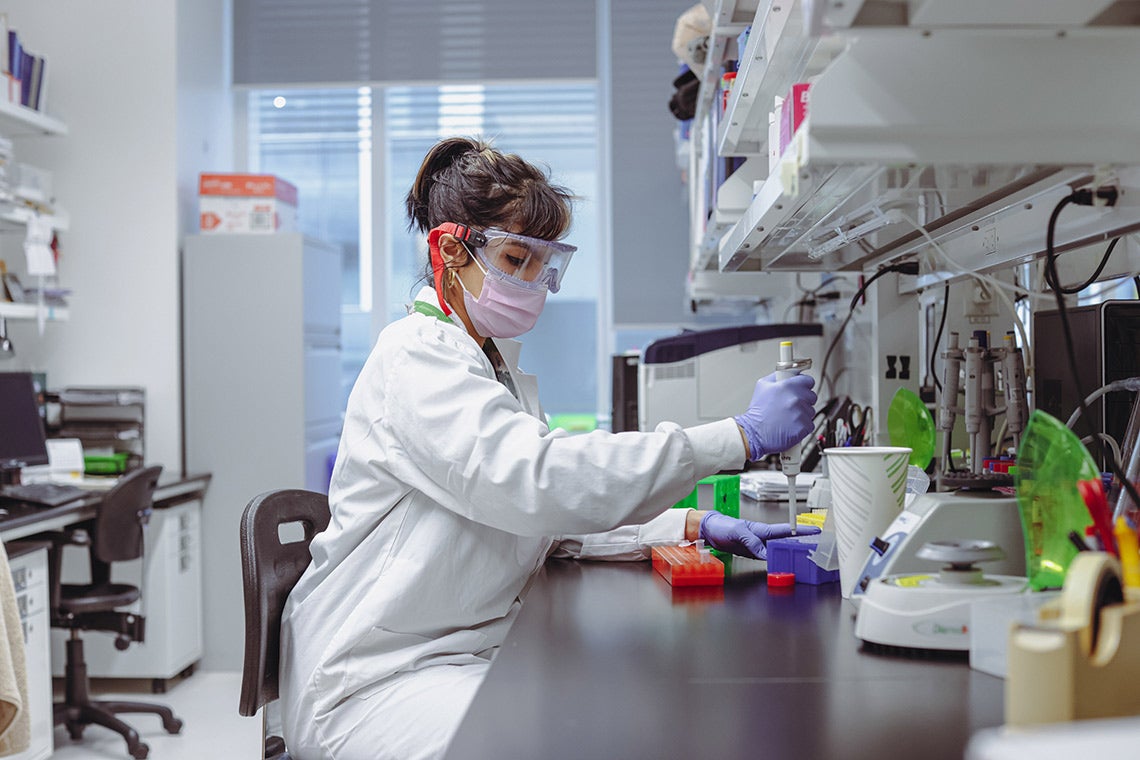 Recognizing the opportunities she’s been afforded, Ganji is determined to make it possible for others to pursue their dreams – particularly those from her home country of Iran.

In October of last year, Ganji stood outside of U of T’s Sidney Smith Hall on the St. George campus and delivered opening remarks at a rally that condemned the authoritarian regime that rules Iran. The event was organized by Ganji and other Iranian students in the wake of the murder of Mahsa Amini by Iran’s morality police last year.

Last week, Ganji helped organize and host an event at U of T to mark the third anniversary of the downing of Flight PS752. The Ukraine International Airlines jet was shot down by Iranian armed forces on Jan. 8, 2020, killing all 176 aboard – including eight U of T community members.

As an executive member of U of T Students for a Free Iran (UTSFI), Ganji has also helped plan other vigils, rallies and open discussions in an effort to mobilize support for Iran’s fight for freedom – all on top of her considerable academic workload.

“As a graduate student at U of T, I have a very valuable platform and the opportunity to be the voice of those inside Iran,” she says, adding that the brutality of the Iranian regime has not only sparked her passion for activism, but caused her to reflect her reflect on her own past.

“It’s been the first time where I’m thinking back to how I actually felt when I was in Grade 8 and I had to wear a hijab every day going to school, when that was just something my family wanted me to do.”

“From personal experience, I can attest to the importance of freedom of expression.” 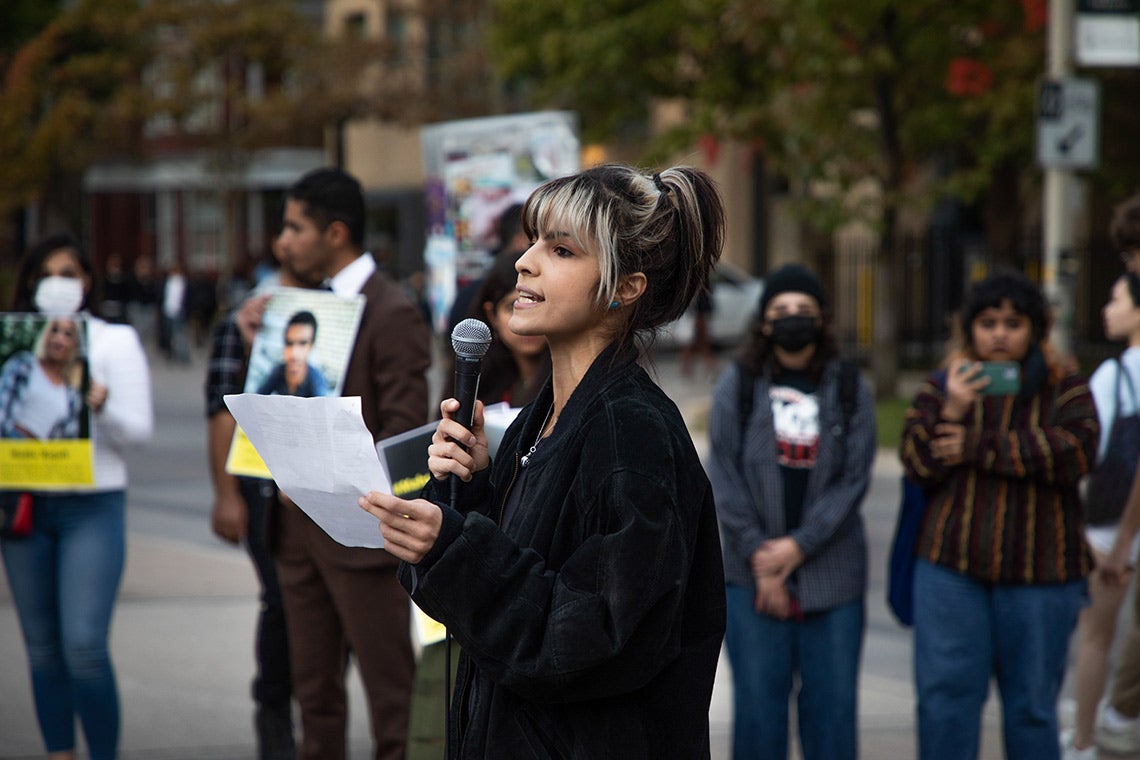 Ganji’s family immigrated to Toronto as she began to contemplate her academic path. While she excelled in her studies – “I was always in the front row in science class” – she says she sometimes struggled to make the transition to a new country because of her parents’ traditional values.

“I’m going to school in a place where I constantly see girls like me who are expressing themselves, but I had a lot of limitations related to that,” she says. “I didn’t fully understand it at that age.”

These days, Ganji has a clearer picture of herself and the world around her – not to mention a sense of great responsibility.

She has already completed a bachelor’s degree with a double major in physiology and human biology at U of T, as well as a master’s degree in physiology, and is now helping co-ordinate an international network of 12 centres to evaluate the feasibility of RIC, as a potential new treatment for NEC.

Pierro, for his part, calls Ganji an “exceptional scholar.”

“She is a committed professional who is driven to work hard to advance her knowledge and skills,” he says.  “I have witnessed her passion for science over the years and have come to trust fully that through her compassionate character and professional work ethics, Niloofar is set to become a successful physician scientist who will be an asset to the future medical and scientific community.”

On top of her PhD work and activism, Ganji is a teaching assistant in the department of physiology in the Temerty Faculty of Medicine.

She says it’s been difficult balancing her busy life in Toronto while worrying about friends and family in Iran.

“You live this parallel life as an immigrant,” she says. “You build a new home, but your heart is with Iran.”

“Since Amini’s death, it’s been extra-difficult,” she adds, admitting that she’s been glued to her social media feed. “Seeing news of executions in Iran, what they’re doing to people in the streets, in their homes, in schools. We’re all going through a sort of trauma.”

Ganji longs to see her home country rid of the theocracy that has been in power since 1979.

“The overthrow of the Islamic regime would mean the prospect of me going back to my country with my partner will no longer be a fantasy or a dream,” she says, adding that she wants to put her knowledge and expertise in pediatrics and health care to work for the Iranian people.

In the meantime, she plans to stay focused on her research – and continue planning events that raise awareness of the plight of her home country.

“As soon as the lens is turned away from Iran, the brutality and violence will increase unimaginably,” she says.

“I feel a sense of responsibility with everything I do. My family made a lot of sacrifices for me to have these opportunities.”