U of T careers: Sarah Sharma on being a McLuhan scholar 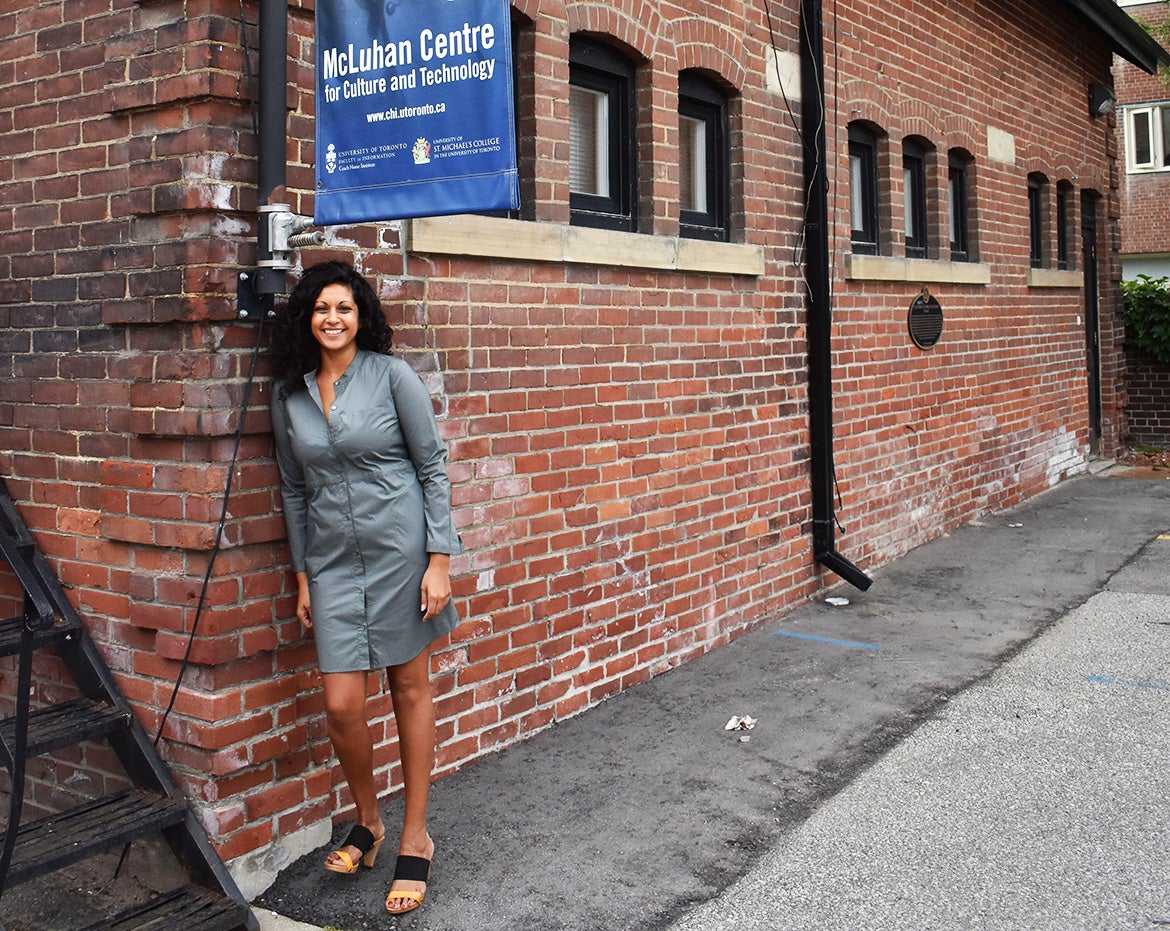 Sarah Sharma outside U of T's McLuhan's Centre
September 14

U of T careers: Sarah Sharma on being a McLuhan scholar

Sarah Sharma outside U of T's McLuhan's Centre

When Sarah Sharma came to the University of Toronto in 2016, she was looking forward to integrating the work of a media theorist renowned since the 1950s – Marshall McLuhan – with cutting-edge scholarship on media. While her arrival at U of T has come to signify a change in the way many think about McLuhan’s work, it also marked a change in her career path.

Sharma is the director of the Faculty of Information’s McLuhan Centre for Culture and Technology, a charming space located across from Queen’s Park that was formerly known as the Coach House Institute and was once McLuhan's office. The centre derives its mission from the Toronto School of Communications (a school of thought developed by McLuhan and other U of T scholars like Harold Innis) to examine today’s complex media and technology landscape.

“I want to reintegrate the McLuhan Centre deeper into the research that is going on at the university while making sure what we discover is open to the public,” says Sharma, who is an associate professor cross-appointed to the Institute of Communication, Culture, Information and Technology at U of T Mississauga and the Faculty of Information.

“I’ve been trying to generate, not a single audience or line of inquiry, but an always new audience of diverse people and approaches. I want to bring in new topics and acknowledge this diversity in everything we do. The study of technology cannot be exhausted.”

The seminars presented at the McLuhan Centre reflect those McLuhan held during the 1960s and 1970s.

The title of last year’s seminar series is a play on McLuhan’s seminal work, Understanding Media: The Extension of Man. This year another seminal text, The Mechanical Bride: Folklore of Industrial Man, is being reworked as the title of another seminar series, The Mechanical Bro: Folklore of Technology, which focuses on how to upend the logics and designs of an overly utopian media culture.

Topics covered this year include the relationship between war and media, media and human senses in terms of touch, digital colonialism and archival practices of resistance.

Sharma’s career as a McLuhan scholar began as a PhD student at York University and continued at the University of North Carolina, where she worked as a professor of communications studies for nine years. “I brought the Toronto School to my teaching and research at UNC,” she says. However, when she came back to Toronto, she set out to update the Toronto School more directly to take up considerations important across the university, including critical race theory, feminism and gender studies, as well as issues related to social differences in terms of class and labour.

“There are many different ways to be a professor,” she says. “In my first position, I was just out of grad school and my focus was on teaching, writing a book, and getting tenure. I didn’t know exactly what would happen by moving to U of T, but this position has opened up a whole new way of being a part of the university. It has allowed me to build bridges.”

Though she may not have imagined that her work as an academic would eventually bring her to lead the McLuhan Centre, a place that operates as a hub of community and scholarly exchange, Sharma believes the career shift makes complete sense.

“Research and teaching wise, it feels like I’ve really come home, but the centre has been quite a dynamic shift in terms of what my job feels like day to day.”

Her focus on media and technology – especially the way technologies alter the way gender is experienced – stemmed from what Sharma calls an awareness that resources are not distributed equally in society, and recognizing that social difference is structured and lived in very deep ways.

“I’m interested in how technologies alter conceptions of space and time, a Toronto School concern, as well as how they alter how we live, labour and love,” she says.

Her first book, In the Meantime: Temporality and Cultural Politics, addressed these and other issues by looking into the way media structures time and space, and the relationships of labour and technology. Her newer work is informed and inspired by the networks and people around her at U of T and by those who participate in the Monday Night Seminars.

“It’s been really important for me to learn from feminists in this institution,” she says. “A feminist view of technology seems to matter even more now than it used to, and perhaps quite surprisingly for some, McLuhan’s original theories of media are actually quite helpful in this regard,” she says.

She is also thankful for the learning she gets to do with students.

“I find them to be mentors, specifically on the question of technology and cultural change,” she says. “There’s a real reciprocity in this profession: Students share things with me that they’ve learned through their own technological lives and practices. They keep me updated and engaged with what matters, what they’re afraid of and what they sense, and all the things they find compelling about what is emerging in popular culture. In a field like media studies, students can help you stay relevant.”

Sharma’s current research includes two continuing book projects: One that deals with the political implications of using technology to exit and escape from social relationships, and a second collaborative project that began in last years’ seminar series, MsUnderstanding Media. She is also writing shorter topical pieces for wider circulation related to gender and technology.

“McLuhan changed the way people thought about technology,” she says, noting that she wants to continue examining the fluid relationship between people, societies and technology.

“I always say McLuhan left us with a lot of work to do and we are trying to do it here,” she says. “But I’d also like to always call attention to the ideas, people and populations who are most excluded, often by design, in imagining and developing the digital worlds we can’t escape from. As we learn, we can flip this equation, not by escape but by building a better digital future.”