The writing on the wall: U of T expert's look at graffiti and the fight against gentrification 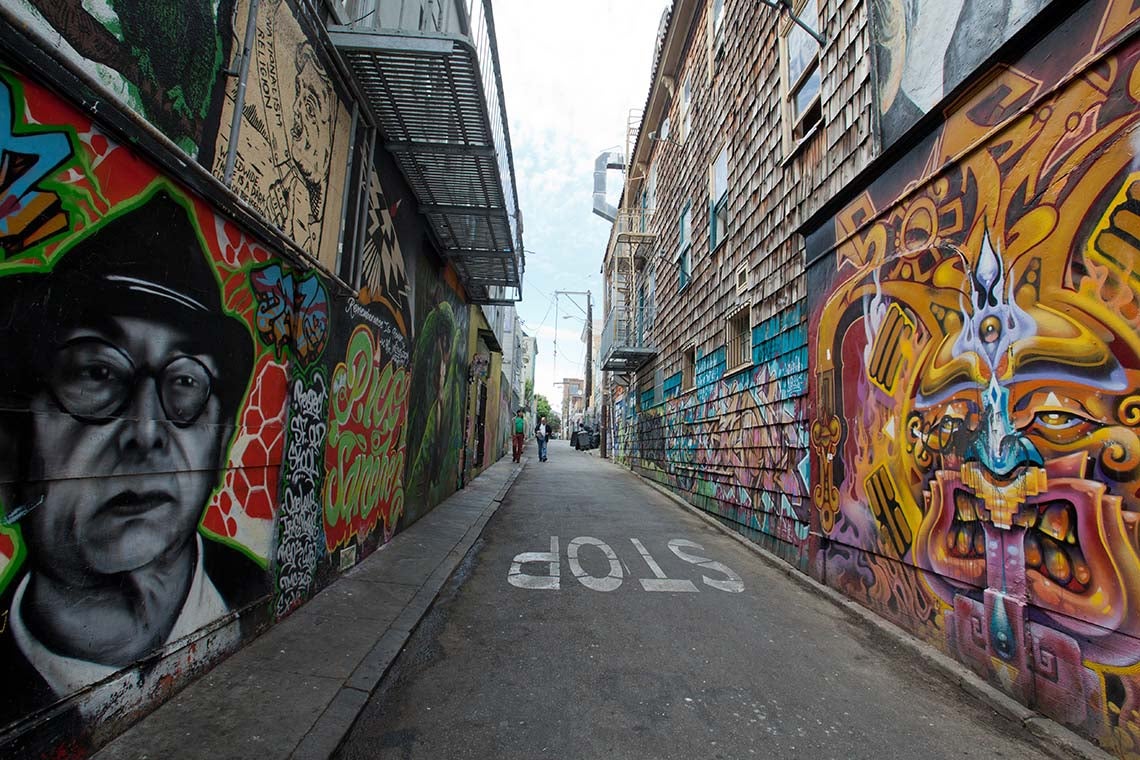 Clarion Alley in San Francisco: "In the alley, people are yelling back through the words they write on the walls," says U of T's Tracey Bowen (photo by John S Lander/LightRocket via Getty Images)

While an alley covered in graffiti may be an eyesore to some, to Tracey Bowen it’s “eye candy.”

Bowen is an assistant professor, teaching stream at the University of Toronto Mississauga's Institute of Communication, Culture, Information and Technology, and an accomplished visual artist. She has spent her career studying visual art education, visual culture and studio pedagogy, including an ongoing study of graffiti that dates back to the 1990s when she followed the work of young graffiti artists making their marks in alleys and industrial spaces around Toronto.

“I was interested in how these artists were working within a traditional education environment and also owning the craft,” she says. “Often graffiti is equated with vandalism, criminality or marginality, lack of education and low economic status, but it wasn’t the case for some of the artists in my thesis,” says Bowen (pictured left). “They really were urban artists, climbing over garbage and skids to places nobody wanted to be and using spray cans – in the dark – with incredible control. They had a real passion for the art form and real knowledge and technique. They knew graffiti artists and styles from South Africa to Berlin, just like any art other movement.”

Nearly three decades on, Bowen’s interest in graffiti continues. She seeks out urban art on her travels to graffiti hotspots like Lisbon, Berlin and Toronto’s own Graffiti Alley. Recently, her work has taken her to California, where her current research examines the social and political messages of graffiti artists working in San Francisco and San Diego. In those cities, established Mexican neighbourhoods are enduring rapid change due to gentrification. The community response – which Bowen dubs “gentriffiti” – is literally written on the walls.

“My current work investigates graffiti as a performative act, and looks at Toronto’s Graffiti Alley, which I’ve watched since the ’90s, and also alleys in San Francisco’s Mission district,” says Bowen. “I am interested in the traces that are left or covered up or bear witness to other performances. But I’m also interested in the social activism of artists who are using the very walls that they’re going to tear down to speak out against the community changes.”

In San Francisco’s Mission District, Bowen examines the neighbourhood's historic Precita Eyes murals, community-created frescos that date back the 1970s and chronicle the vibrant and thriving Mexican community. But Bowen is also interested in the ever-changing graffiti murals in adjacent alleyways, which provide a more current look at the events shaping the neighbourhood.

“The murals in the alleyways are in conversation with the historical murals,” she says. “They also speak to history and culture, but also to more current issues. “The alleys provide space for other voices to be heard. Clarion Alley runs off a street now populated with upscale restaurants and developers that are destroying everything that made it the Mission. In the alley, people are yelling back through the words they write on the walls.”

She points to sidewalk stencils and graffiti murals that read “Google, get out!” or “This city is not for sale,” and to school wall murals by eighth-graders that document how it feels to live where their friends are being evicted.

“A lot of work talks about how gentrification is happening, about inequality and racial discrimination and the uprooting of people, evictions and arrests of young men. These are tied to human rights issues – everything you see happening around immigration and the border has been written on the walls in the Mission for a long time.”

Similar responses can be seen in San Diego’s Chicano Park, where the park’s famous murals cover the pillars of the Coronado Freeway overpass.

“It’s an amazing history lesson about the people and the history,” she says. “Go for a walk in the Mission or Chicano Park and you’ll learn a lot about what happened there historically and today. The kinds of things we hear about on CNN are narrativized on the wall. It’s a different way of documenting life and culture and history – and historical perspective.

"We need to pay attention to what they’re writing.”