Women’s March on Washington D.C.: U of T expert on the protest 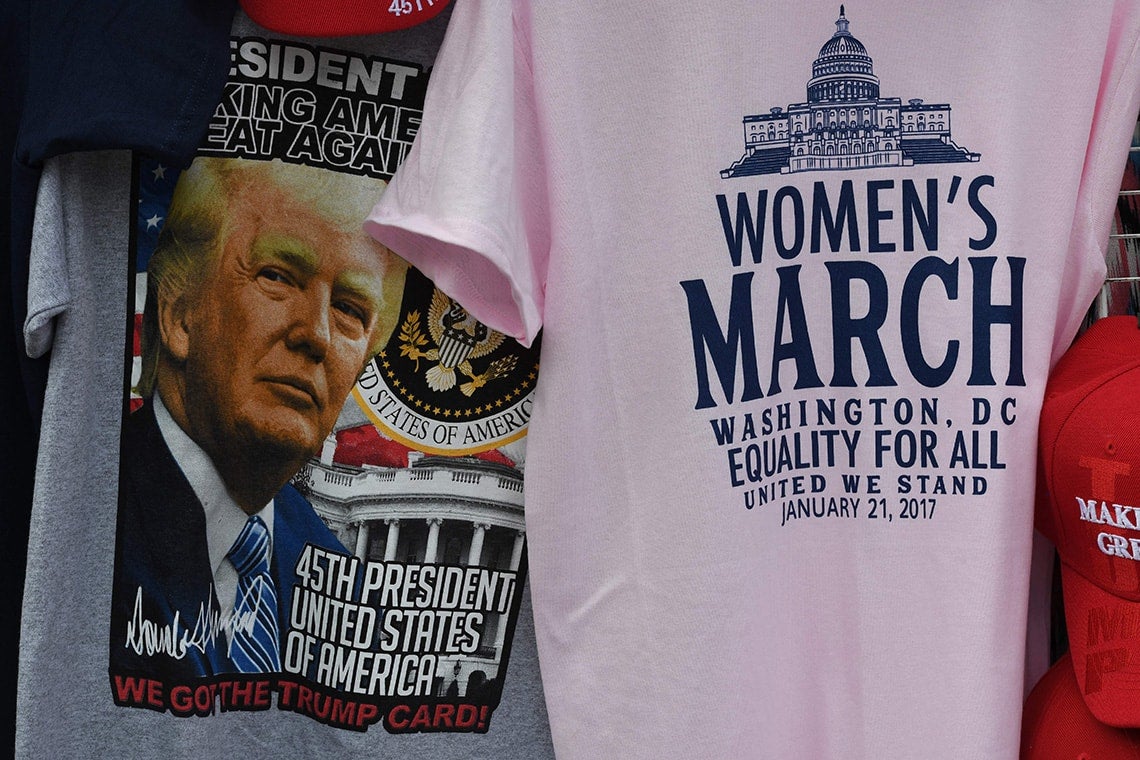 Women's March merchandise on sale outside the White House in Washington, D.C. (photo by Mark Ralston/AFP/Getty)

With U.S. President Donald Trump now in office, more than 200,000 people are expected to attend the Women’s March on Washington D.C. on Saturday.

Organizers say another 2 million people are set to attend 616 marches across the United States and globally, including Toronto.

U of T News spoke with Sylvia Bashevkin, a political science professor in the Faculty of Arts & Science, about the marches and the issues driving them.

What is the significance of a march on Washington?

The effort is to try and get back some of the momentum that came out of the march that this particular initiative is based on and that is the Civil Rights movement from the 1960s. In the March on Washington for Jobs and Freedom in 1963, Martin Luther King Jr. delivered his ‘I Have a Dream’ speech. If you look at the history of social movements, you see that particular event and the international media coverage that it stirred set a major threshold for the idea that Americans are interested in political change, that they want to see major reforms in voting rights and other civil rights.

I think this is an effort to capture that momentum of positive change and in this case to talk about the consequences of many of those progressive social movements from the 1960s being set backwards.

Why are people marching on Saturday?

You have everything, starting with core women's rights on reproductive choice – which is why Planned Parenthood is deeply involved. We know that President Trump said in the third presidential debate that he would appoint judges to the U.S. Supreme Court who would effectively overturn Roe v. Wade, which is an important judicial precedent on women's right to choose.

Trump is also likely to emulate what other Republican presidents have done, which is to deny all U.S. foreign aid to NGOs outside the U.S. that provide or promote family planning activities. These actions have enormous consequences.

And then you have a very, very large number of other concerns that are central to the women's movement historically, including violence against women, sexual harassment, opportunities in employment and education for women.

And then you have questions about the erosion of civil rights, environmental issues, LGBTQ rights, concerns about U.S. foreign policy and the tendency towards isolationism.

There's a huge basket of concerns, which is why you have such a large umbrella coalition of groups that are supporting the march tomorrow and have created spinoff marches around the world and in cities around the U.S.

What draws people outside of the U.S. to attend a Women's March in their own cities?

We know that many Americans living in Canada are capital ‘D’ Democrats, and concerns about the direction of the country are of vital concern to them. Americans who live around the world have to file taxes every year with the United States.

We also know that the U.S. civil rights movements of the 1960s inspired many protest movements around the world in the decades since. The songs of civil rights were sung in Tiananmen Square during protests in China in 1989.

Are there concerns that if the U.S. goes backwards on human rights that other countries will follow suit?

There are women around the world who are watching the inspiration that comes from U.S. social movements, now being eclipsed by a movement in a much more conservative direction. There's also the real-world consequences to changes to U.S. international aid.

We know under Hillary Clinton as secretary of state, under John Kerry and generally under Democratic presidents since Bill Clinton, there's been a huge amount of attention on the education of women and girls in the developing world.

There's been a lot of focus on improving health opportunities, health outcomes and access to education – there are all kinds of ripple effects that can be very negative with a change in government from Democratic to Republican. That's not saying anything about the extent to which Donald Trump and Mike Pence are more radically socially conservative than many other Republicans.

Will tomorrow's marches change the Trump administration's policies? Or are they simply acts of solidarity?

It's hard to know early on except that we do know that some of Trump's cabinet appointees have been much more moderate in their comments to congress than Trump was on the election trail.

It's possible that if there's enough push back, there may be some moderation. For example, some of Trump's nominees, contrary to his argument that climate change was a hoax propagated by China, have said that climate change is a reality and at least part of it is caused by humans.

That's an indication that those individuals are somewhat more moderate in their views than Trump, or that Trump has decided he doesn't want to be as polarizing in office as he was on the campaign trail.

I would imagine one of the hopes for organizers who are concerned about the direction of U.S. policy is simply to stake out the size of their grassroots base. While Trump believes he has an overwhelming mandate, in fact the U.S. public is extremely divided. His margin of victory in important states was very narrow and certainly [some people will] point out the difference between how many people have come to the inauguration today and how many people will be protesting tomorrow.

It's an effort to talk about the powers of numbers in a representative democracy, and if there is a distortion from votes to outcomes, one of the ways to make that case – if you're not a political scientist – is to get people in the streets to talk about how this president has a very compromised mandate simply based on numbers.

Part of this is about how much Trump is going to pay attention to that roughly 50 per cent of Americans who profoundly disagree with him, want their voices to be heard and want the fact that his victory is a compromised one to be remembered the day after the inauguration.