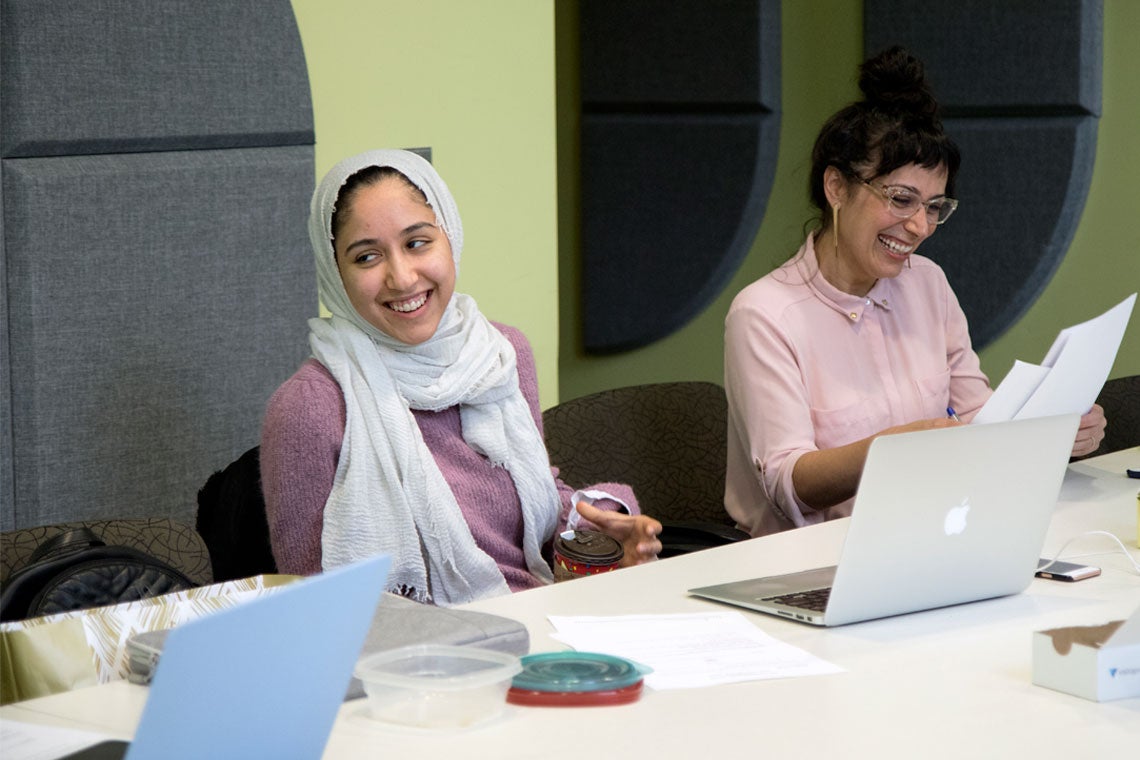 Just over three years ago, the first wave of Syrians began arriving in Canada, fleeing the civil war that uprooted their lives and drove them to refugee camps across the Middle East and Europe.

Today, those families are continuing to adjust to life in Canada – navigating their way through learning a new language, the education system and our frigid winters.

Throughout the resettlement process, a group of University of Toronto researchers have been capturing an intimate portrait of what life has been like for Syrian newcomer families.

The research group – led by Neda Maghbouleh, an assistant professor of sociology at U of T Mississauga, along with Professors Melissa Milkie and Ito Peng – is exploring how the nature of Syrian newcomers’ successes and challenges change the longer they are in Canada.

“I think that's super cool,” she says. “We're not re-inventing the wheel, but in many ways we're putting feminist principles around leadership and organizing into practice.”

Women, too, are the focus of their research.

“We said, ‘What would it look like if we centred the stories of women – and not just women but mothers – as a lens into the fortunes of the family more broadly.’”

And that’s exactly what they did, interviewing 41 Syrian mothers twice within their first year in Canada.

Read more about the research initiative

The research initiative began as a much smaller project, funded by the Social Sciences and Humanities Research Council (SSHRC) and the federal department of immigration, refugees and citizenship.

“Out of that project, we learned that one of the most significant stressors for mothers that seemed to really affect outcomes for families was how teenage children were faring,” says Maghbouleh.

Last year, Maghbouleh was the recipient of an Ontario Early Researcher Award, providing the initiative with a funding boost that allowed them to grow the research team. At the same time, they received a SSHRC Insight Grant to take the project even further.

“The goal is to involve 100 local families in the study with a particular emphasis on mothers and teenagers.”

The on-the-ground researchers all speak Arabic, so they are able to connect with Syrian families on a more personal level.

“I have assembled through sheer luck and the beauty of being in Toronto this multigenerational team of researchers here with U of T affiliations everywhere from early undergrads through people with PhDs who themselves are newcomers from the Middle East and the North Africa region,” says Maghbouleh. 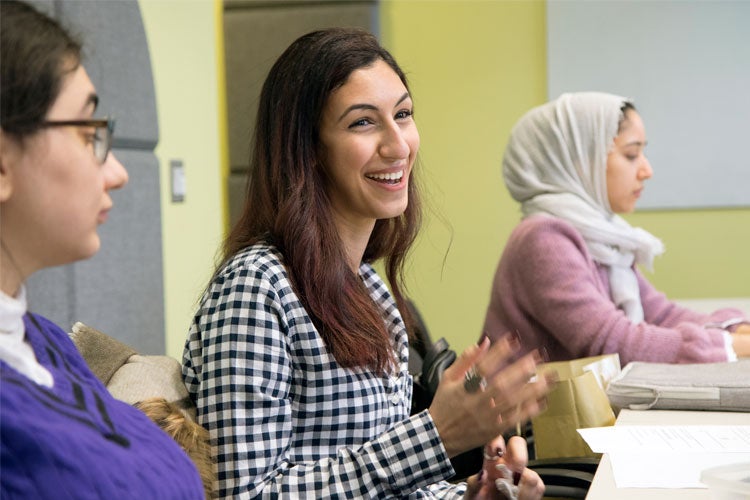 "Most of us are immigrants and we've been through similar situations. It's easy for us to build rapport with them," says Laila Omar, a research assistant and PhD student in sociology, on relating to the women and teens interviewed.

Researchers are in the process of collecting data through interviews with mothers and teens – where they are often welcomed into family homes to talk over tea or during dinner.

“All of the people on our team have the insider or cultural knowledge it would take for families to so generously open up their doors, which is what they do,” says Maghbouleh.

Postdoctoral researcher Rula Kahil is working alongside her son Nour Habli, who is in fourth year studying international relations and architectural theory.

During a recent outing to interview a mother and teen, Kahil and Habli were initially hesitant to disclose their familial relationship. But once they did, they realized it was a huge help, not a hindrance.

“That somehow created ease within our interaction,” said Kahil. 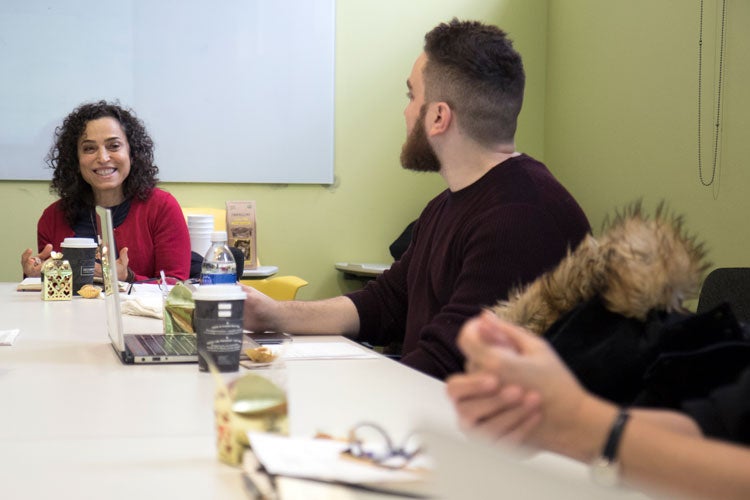 Mother and son, Kahil and Habli, at the research group's weekly meeting

During the current wave of interviews, researchers say they've noticed a significant change in the way Syrian mothers talk about their lives in Canada.

“Emotional trauma was evident in the pilot study,” says Kahil. “Now there's a big adjustment. Emotionally, the mothers are much better.”

Learning English has also helped them gain confidence, she says.

“At the beginning there was a question: What are you proud of? They were always proud of their families. Now many say they’re proud of themselves.”

The mothers interviewed say their biggest challenge is financial stability. Government-sponsored and most privately sponsored refugees were only financially supported for one year, so they are now trying to find ways to sustain themselves and their families.

“There’s this anxiety about finding work,” says Kahil. “Many of the men dropped out of school. They didn't continue their language learning because they need to supply financially so they're looking for jobs. But it's a circle because they can't find a job because they didn't finish school.”

Listen to Maghbouleh on the "View to the U" podcast

When interviewing teens, their stories reflect how much they’ve endured in such a short amount of time, says Anmul Shafiq, a research assistant and recent graduate of political science and criminology at U of T Mississauga.

Shafiq says one interviewee moved to Turkey from Syria, where her mother was diagnosed with cancer and her father was ill.

“We have a number of refugees who are paid members of the team who support our data collection and recruiting efforts.”

Iman Abdul Razzak moved to Canada after graduating from Monmouth College in the U.S. Originally from Aleppo in Syria, Abdul Razzak left the war-torn country for Turkey around five years ago, and soon after, moved to North America for school. While her brother is in Canada, the rest of her family lives in Sweden.

“It was very difficult to adjust,” she says of moving to the U.S. at 18 years old.

But in Canada, Abdul Razzak has found community amongst her fellow Syrian newcomers, making friends and participating in local initiatives like CultureLink’s Syrian children and teen choirs.

She’s considering applying for graduate school in 2020, but is enjoying being a part of the U of T research team in the meantime, where she helps to recruit families to be interviewed.

Maghbouleh’s research group is gearing up to release its first paper on the first round of research in Meridians, an interdisciplinary feminist journal produced by Duke University Press, and a book chapter in an edited volume about Syrian refugees in Canada written by teams across the country and published by McGill-Queen's University Press.