Will the pandemic change the world of work? U of T researcher Scott Schieman aims to find out 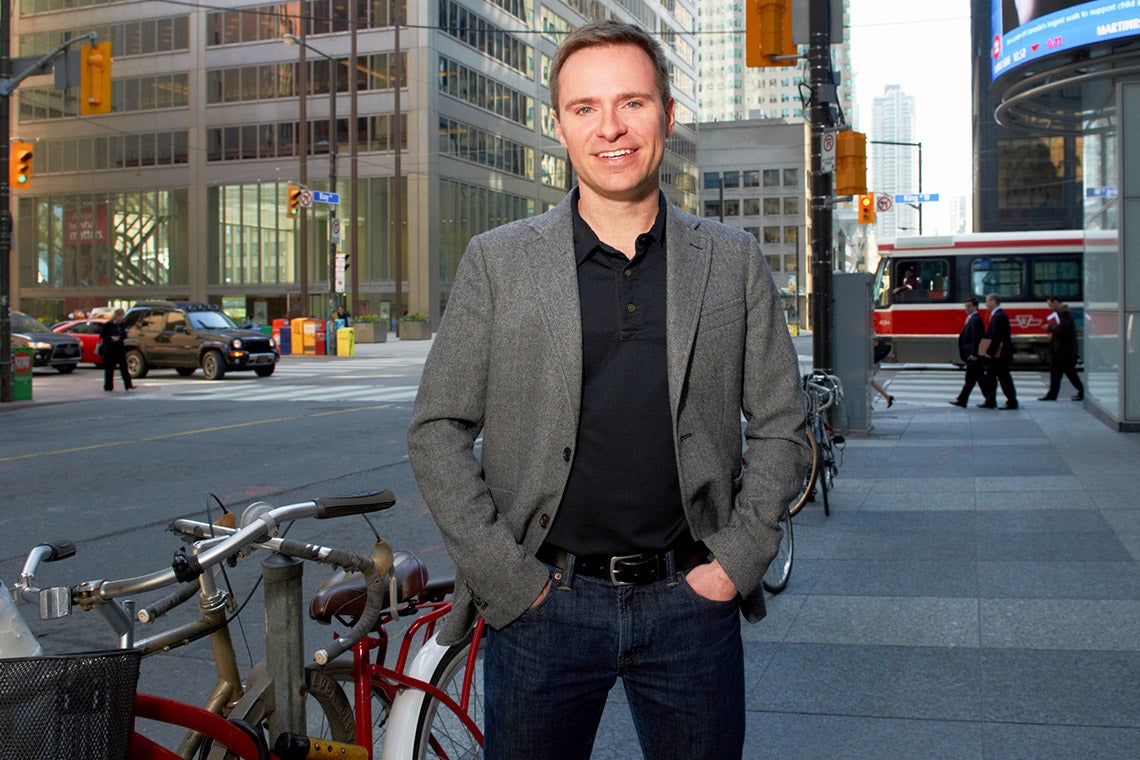 Scott Schieman and his team have already produced some noteworthy findings, including that work-life conflicts have actually decreased for some people amid COVID-19, particularly those who don't have young children (photo by Brian Summers)

As COVID-19 continues to take its toll on the economy, speculation about the future of work abounds.

Will the new standard for office workers be working from home? How will airlines, the film industry or retailers survive the pandemic and what impact will it have on jobs?  And what will happen to the millions of workers who were furloughed? How does this affect their mental health?

These questions – and many others – are the focus of a major new study that has just been launched by University of Toronto sociologist Scott Schieman.

In fact, the study is – like so much of the COVID-19 research happening at U of T now – a pivot from existing work.

Known for his research on work-family balance and the stress that often comes from work, Schieman launched a study in September on the working and financial experiences of 2,500 Canadians. His plan was to replicate that study annually to track changes over the next decade.

Then the COVID-19 pandemic hit. By early March, the virus was turning the Canadian economy – and the working lives of people across the country – upside down.

“We decided to change the design of the study,” says Schieman, who is also chair of U of T’s sociology department in the Faculty of Arts & Science and Canada Research Chair in the Social Context of Health. “We realized that it was important to try to map and explain changes in people’s experiences with employment, work and economic life as the pandemic was unfolding, especially given the sweeping shifts in the broader economy and social interaction.

“The job losses, temporary layoffs, the shift toward remote work for many, the social isolation and sense of powerlessness, and numerous other stressors – we expect these to have both short- and long-term implications for physical and mental health.”

With funding from U of T’s Toronto COVID-19 Action Fund, Schieman, along with a team of 11 faculty and graduate and undergraduate students, combined groups of 2,500 people from September 2019 and March 2020 to create a new sampling of 5,000 people who represent a cross-section of the Canadian workforce.

The new study, COVID-19 Impacts on the Quality of Work and Economic Life in Canada, will follow the workers for the next five years.

“We want to develop a detailed portrait of how these 5,000 Canadians experienced the pandemic before it hit, at the onset, during its course and then after it ended,” Schieman says.

To actually conduct the research, the U of T team is working with the Angus Reid Forum, a market research firm that specializes in online polling.

The researchers’ online poll, which will be conducted near the end of each month, will ask participants about the quality of their work, employment status, financial strain, the economic well-being of their households and mental health.

“When we put the group of 5,000 together, everyone in the sample was employed,” he said. “But during March and April, many were forced to leave the workforce. We are retaining them in the sampling group because this is an analysis of how working people experience this crisis during all the phases of their employment, temporary layoffs, or longer periods of unemployment.”

In addition to the online questionnaire that participants will complete, Schieman’s team will supplement their quantitative research with in-depth personal interviews.

“There are certain aspects of the work experience that will occur during the pandemic that we really need to probe deeply,” he says. “A personal interview, even over the phone or using a tool like Zoom, can produce more richness than you get in an online poll. We’ll be exploring themes like working from home, perceptions about flexibility, workload, and work-life conflict challenges some workers are having with their children at all ages.”

While the research has just begun, Schieman’s team has already produced some noteworthy findings, including that work-life conflict has actually decreased considerably from the period just before the pandemic took hold in April. However, that change wasn’t shared equally across groups.

“We see the largest decrease, on average, among people who don’t have any children. And among those with children, we find the largest increase in work-life conflict among those who have kids younger than six and between the ages of six to 12. This seems to have unfolded similarly for both men and women.”

Schieman warns that it is too early to draw conclusions from this finding as, unfortunately, the pandemic is far from over.

“My colleagues and I are still unpacking this early information and interpreting it,” he says. “There is so much that people are going to experience during the pandemic. There is a lot of speculation now, for example, about ‘new normal.’ And, that’s the purpose of our study – to formally, as social scientists, analyze the evolution of the pandemic as it relates to work and the economy and find out what the effects will be.”