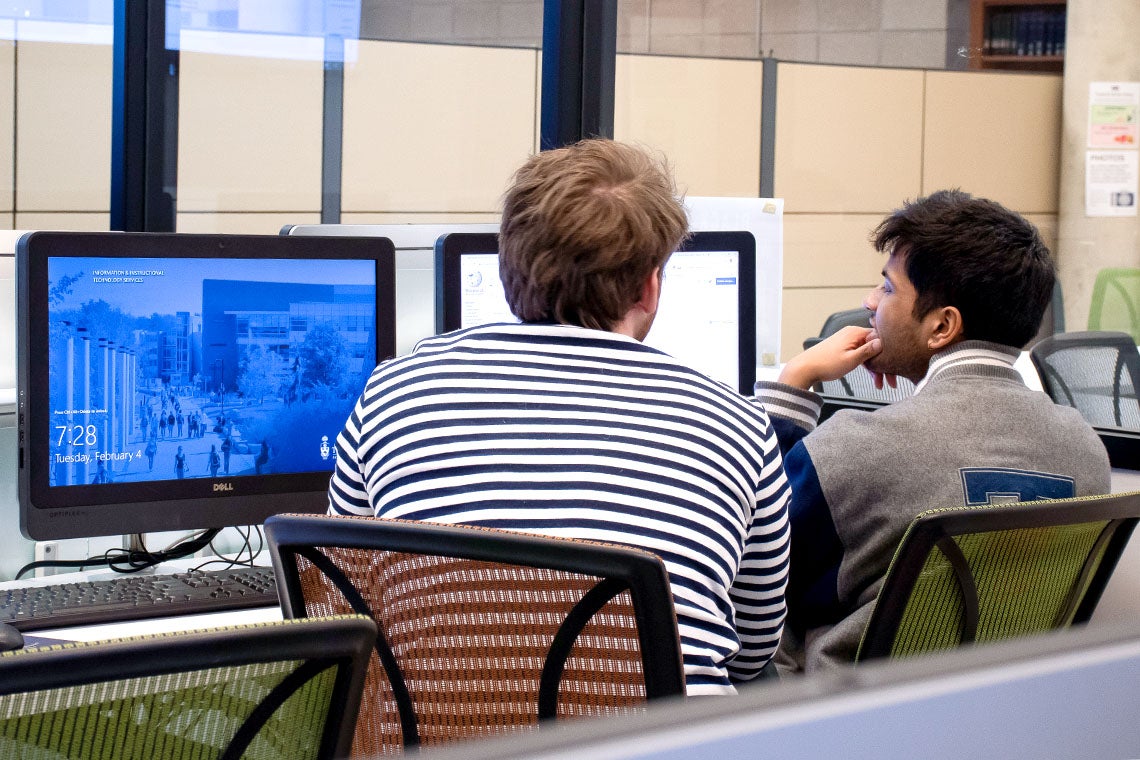 With the help of librarians, the Black History Wikipedia Edit-a-thon at U of T Scarborough invited participants to add and improve Wikipedia pages about Black history in Canada (photo by Raquel A. Russell)

There are significant gaps on Wikipedia when it comes to information about Black history in Canada – a problem since the collaborative online encyclopedia is a familiar entry point for many Canadians doing research on a topic.

It’s an issue that a group of University of Toronto information professionals hoped to address by co-hosting the university’s first Black History Wikipedia Edit-A-Thon earlier this month.

“In my own undergraduate education background, I realized that so much of my immediate knowledge of Black history was informed by an American context,” says Alex Jung, an open technology specialist with U of T and a former Wikipedian-in-Residence at U of T Libraries.

“For somebody that’s pretty new to Canada, or more specifically Toronto, the different nuances here – the very evident Afro-Caribbean communities, the African-diaspora communities – there’s a lot to learn, and there have been so few opportunities to focus on them.”

“The point of an edit-a-thon is to fill in gaps, and the gaps are often in areas of marginalized or underrepresented groups and histories,” says Whitney Kemble, a history librarian at U of T Scarborough. “We want to supplement and improve their representation and the content, and facilitate more learning about these topics.”

With access to primary and secondary sources from the U of T Libraries and Toronto Public Library collections, 21 edits were completed and 19 references were steadily added by the end of the evening.

“That's what's great about having edit-a-thons in a library and with librarians,” says Kemble. “We have valid secondary sources. A lot are scholarly, and some are grey literature produced by government organizations or other community organizations.”

One of the new Wikipedia articles to come out of the night was for First Baptist Church, the oldest Black institution in Toronto, formed in 1826 by fugitive slaves. Before the edit-a-thon, the page did not exist. 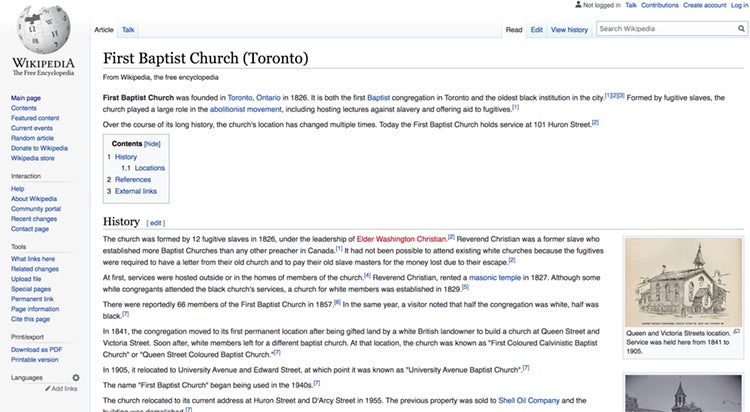 Participants in the U of T edit-a-thon added a Wikipedia page for Toronto’s First Baptist Church, which was formed in 1826 by fugitive Black slaves (screenshot via Wikipedia)

Other pending changes include a new page for the Congress of Black Women in Canada, a group that was created by Kathleen Livingstone, a Black social activist, actor and broadcaster. Work also began on a page for The Provincial Freeman, a weekly publication that advocated equality, integration and self-education for Black people in Canada and the United States and was co-founded by , Mary Ann Shadd, the first Black woman newspaper editor in North America.

The Black history edit-a-thon was part of a movement of librarian efforts to improve articles on Wikipedia. Wikipedia campaign #1Lib1Ref annually invites all librarians to “participate in the online encyclopedia project, specifically improving articles by adding citations.”

“There's more of a personal investment for me as well, as I owe a lot to Black history,” says Jung, a popping dancer in his free time. “I’m into funk style dances – Black dances. A shout-out, too, to the ball scene mainly comprised of queer and Black folks. I owe a lot to Black artists and Black culture. I think we all do.”

When it comes to Black Canadian culture and its documentation on Wikipedia, there remains much to be added – from entries on Donald Willard Moore, a Barbadian community leader and civil rights activist who fought to change Canada’s exclusionary immigration laws, to Black Theatre Canada, a Toronto theatre founded by Vera Cudjoe that was dedicated to the development of Afro-Caribbean works and artists.

“As a history librarian, and as someone who has studied a lot of Black history,” says Kemble, “I want there to be more information that reflects all kinds of people, experiences and events in Black history.”