White supremacists, Antifa: U of T experts on protesters in Charlottesville 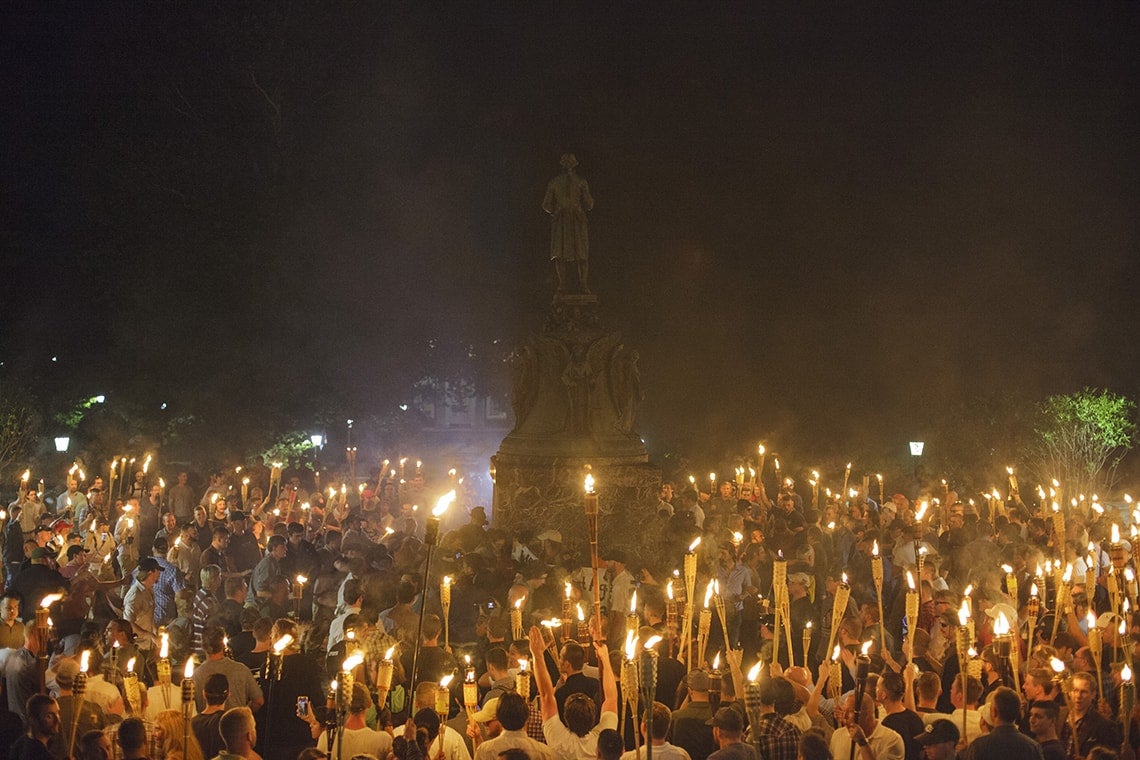 Neo Nazis, alt-right and white supremacists encircle counter protesters after marching through the University of Virginia campus with torches in Charlottesville, Va. (photo by Shay Horse/NurPhoto/Getty)

The violence in Charlottesville, Va., and U.S. President Donald Trump's controversial comments have turned the spotlight on the emergence of emboldened white supremacists on the far right and the presence of some Antifa protesters on the far left.

U of T News spoke with sociologist Akwasi Owusu-Bempah, whose work focuses on race, crime and criminal justice, about the prevalence of white nationalists in the U.S. and Canada. Owusu-Bempah, who returned to U of T in the fall of 2016, says that while he was teaching at Indiana University in Bloomington, the local Ku Klux Klan would hand out flyers, and the campus had white nationalist groups.

David Roberts, who specializes in geographies of race and racialization, and Alex Hanna, who uses data collection to analyze protest movements, talked about Antifa, the counter protesters who surfaced in Charlottesville. Trump has also blamed them for the deadly violence, inciting criticism from politicians on both sides.

“I think it is extremely important that we avoid even the slightest appearance of drawing equivalency between white supremacist/white nationalist/fascist groups and those organizing to resist them in the fight against racism, xenophobia, homophobia, fascism,” Roberts says. “While there is no denying that Antifa groups do engage in violence in various forms, their organizing is not predicated on the hatred of others. This is an important and key distinction.” 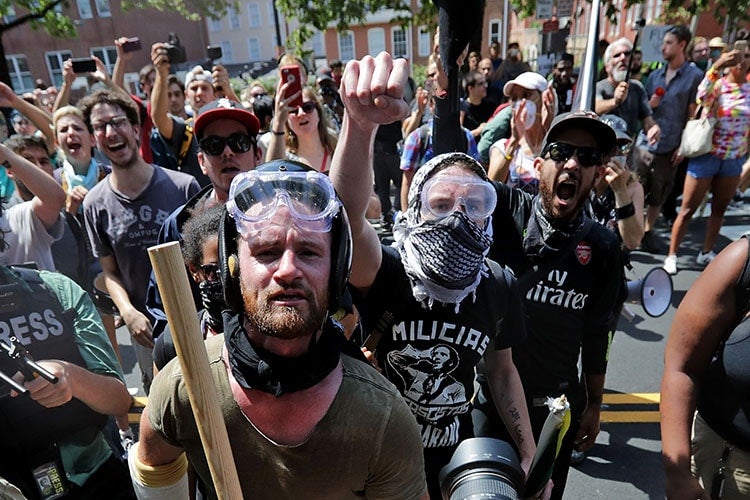 Anti-fascist counter protesters hurl insults at white nationalists, neo-Nazis and members of the 'alt-right' in Charlottesville over the weekend, where a statue of Confederate General Robert E. Lee is slated to be removed (photo by Chip Somodevilla/Getty Images) 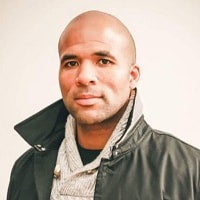 Akwasi Owusu-Bempah is an assistant professor of sociology at U of T Mississauga:

White supremacy in the United States has been very open historically – first, with slave holding, and then, the public lynching that came afterwards. Entire families would go and watch the lynching of Black men. In the post-civil rights era and certainly in the ‘80s and ‘90s, we started to see a change in how open Americans were with their racism. It was a more polite, more subtle racism.

I think this has always been present in the United States. But I think Donald Trump has specifically provided more fodder for this type of public action. Trump seems to have not only re-legitimized but also provided a space and set an example for people that hold these views. During the election campaign, he said a host of overtly racist things. His election has signalled to people with those views that it's OK. If the leader of the most powerful country in the world and their leader is saying these things, that provides them with a justification and further motivation to espouse these views and act in public.

I came back from Indiana, where the local branch of the KKK in Bloomington would often distribute flyers saying they were going to hold demonstrations, and we had white nationalist groups on campus. Those individuals didn't hide their identities. The FBI has been warning about the threat of white nationalists and white supremacists for some time. They've said that white supremacists pose a threat to the nation, and they actually highlighted the fact that white supremacists have been quite effective in infiltrating American law enforcement. This is something that is not new. It is ongoing, and it's very dangerous.

Likewise, we have a history of white supremacy in this country too. Specifically the first 16 legislators of Upper Canada held slaves. J.S. Woodsworth made comments on the inferiority of Black people, views that were supported by the Macdonald government. That's not to even mention how Indigneous populations have been viewed and treated. Rob Ford's sister, Kathy Ford, was involved in a relationship with a white supremacist. Of course, we've had Kellie Leitch and her campaign. [Over the weekend] I retweeted the example from B.C. of a KKK flyer distributed earlier this year – the second time in three months. In the last five to ten years, we've had fairly prominent cross burnings on both sides of the country. In Halifax, a mixed race couple were antagonized, and individuals basically run out of town. And we have white supremacist groups here in Ontario and nationally.

We as Canadians have done a better job of erasing our racist past. But I would suggest that racism and white supremacy lurks under the surface of Canadian society, and at times rears its ugly head. There's a potential for the same thing to happen here. 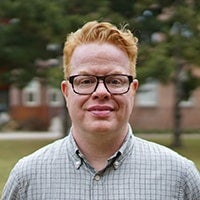 The Antifa (anti-fascist) movement is a term used to describe militant anti-fascist organizations who embrace a variety of tactics, including physical violence, to confront white supremacy, racism, homophobia and fascism.

The movement has its roots in 1930s Europe and paramilitary organizing against the rise of fascism prior to the Second World War. In the United States, the emergence of Antifa groups is most closely connected to the late 1980s punk scene in response to neo-Nazi infiltration. The growth of the North American Antifa movement in recent years can likely be traced to a response to an emboldened white supremacist/white nationalist movement, as well as a belief that governmental institutions are complicit in the perpetuation of racism and white supremacy. While I do not know the details of Antifa organizing in Canada, just as Canada is not immune to white supremacist organizing, I am certain that there is Antifa organizing as well.

Given the emboldened white supremacist movements and their embrace and advocacy of violence and hate, we are likely to see more violent confrontations and violent acts perpetrated by extremists. It is really hard to know how many of the counter protesters are actually Antifa – though some of them have definitely claimed that label. My guess is that the vast majority of those who showed up in counter protests did so with more peaceful intentions. It seems to me that the attempts to paint the counter protests with a wide brush as Antifa are largely coming from white supremacist organizers and sympathizers in an attempt to justify their violence – but again, this is just a hunch.

Part of what I am trying to say is that while the white supremacists were organized in their message and approach, those who oppose them in Charlottesville and elsewhere represent a pretty diverse collection of groups with various opinions about violence. 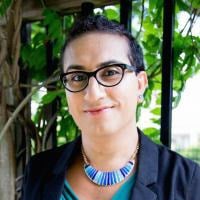 Alex Hanna is an assistant professor at U of T Mississauga and the Faculty of Information:

Antifa is hard to discuss in general terms, mostly because its members’ ideologies tend towards anarchism, anarcho-syndicalism and autonomist strains of Marxism and socialism. These ideologies by and large tend to be anti-state and left libertarian, which means they see a more perfect society to be composed of small, autonomous groups of individuals working together in mutual respect and aid.

Antifa has been in the news lately because they have been very visible in shutting down and combatting white supremacists emboldened by the election of Donald Trump. Antifa tends to be different from other modern liberal and left movements in the U.S. such that they are willing to destroy property and inflict violence on not only white supremacists but the property of corporations and the police. Antifa in Berkeley, Calif., caused enough of a disruption, for instance, to prevent the former Breitbart writer Milo Yiannopoulos – who has regularly promoted racist, sexist, and transphobic views – from speaking at the University of California-Berkeley. It isn’t surprising that they would be involved in counter protests to the recent events in Charlottesville.

The resurgence of Antifa groups is a response to rising nationalism and white supremacist movements. In the U.S., far-right and nationalist organizations are heavily armed and are disproportionately the progenitors of violence. Antifa arise as a reaction to far-right movements and mostly seek to clash with them.

We’ve seen more nationalism in Canada, yes, but I don’t think nationalists are as emboldened as they have been in the U.S. So far, they have been met with a left and liberal response with little Antifa involvement. My hypotheses would be that stronger gun laws dissuade white nationalists from carrying weapons as openly as they do in the U.S., and that the public discourse coming from the highest officials in the government is one of multiculturalism and cosmopolitanism (often in opposition to their past and current actions which harm Indigenous communities and communities of colour). This public discourse provides nonviolent counter protests with some level of government support. Therefore the Antifa response seems to be less present.