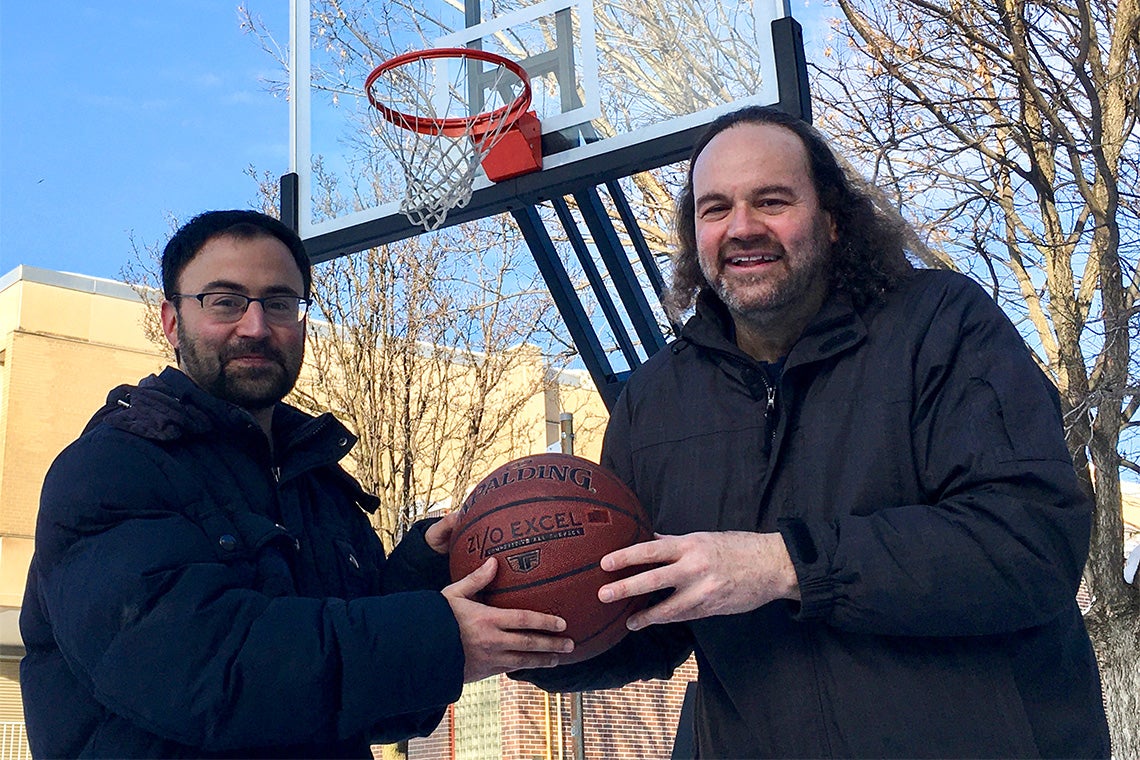 Now, a professor at the University of Toronto has delved into the statistical probabilities of the game – and discovered that simplicity is often the way to go (even though it's not as fun to watch.)

“When I was growing up, I would play with my dad, and I remember that he would attempt these really easy shots,” recalls Jeffrey Rosenthal, a professor in the department of statistical sciences in the Faculty of Arts & Science.

“That goes against what most of us would think to do, which is to make a difficult shot in hopes that your opponent won’t be able to match it.”

When shooting hoops together at the Willcocks Common just south of Sidney Smith Hall last summer, Rosenthal and his half-brother Daniel, a U of T alumnus who studied advanced mathematics as well as philosophy and psychology, wondered if they could mathematically determine the effect of shot difficulty on the probability of winning points.

“It may not be the deepest mathematical analysis we’ve ever done,” Rosenthal says. “But trying to justify the rules of HORSE presented us with an interesting question about the probabilities: What is the optimal shot to take to increase your chances of winning?”

The co-authors published their results in the June/July 2022 issue of the journal Notices of the American Mathematical Society.

For those who need a refresher on the rules: HORSE is a game for two or more players who take turns attempting to land certain shots.

If player one calls a shot and makes it – for example, a hook shot, or a shot that hits the backboard – player two must match it. If they don't, player two is assigned a letter and the other player scores a point. If a player calls a shot but misses, their turn is over and it's their opponent's turn. The game goes on until one player has five points while the other has five letters – H-O-R-S-E.

“Where the controversy comes in is, if you make your shot, and the other player also makes the shot, nobody gets a point … but whose turn should it be after that?” Rosenthal says. “According to the traditional rules, it's your turn again to call and make the shot.”

“Now as a statistician, I see how my dad’s strategy of attempting an easy shot affects the probability and works to his advantage,” says Rosenthal, whose dad is a retired U of T prof. “You are more likely to sink an easy shot and ultimately score a point. But that makes for a pretty boring and predictable game” — nothing like the 2020 NBA HORSE Challenge, where pros took unusual shots to show off their skills and beat their opponent.

Is there a way to improve the rules of the classic game?

“There isn’t a commissioner of HORSE enforcing official rules or anything, so our logic is to modify the rules to have the turn pop over to the other player. That way the opponent gets a chance to call a shot,” Rosenthal says.

For the sake of mathematical analysis, the researchers had to make some assumptions – they didn’t account for variables like height that could influence the outcome, for instance. The first analysis in their paper supposes that both players are of equal ability, which means that each shot will be equally challenging for both players.

“Under the traditional rules, it’s smart to take an easy shot – like standing next to the net and hitting it off the backboard – because if you both get it in, then at least you get to take another turn,” Rosenthal explains. “Eventually one of you will miss and the probability will be nearly 50/50 – you’ll have almost a 50 per cent chance of scoring a point and giving a letter to your opponent.”

Under the modified rules, where the turn switches to the other player if both players make the shot, he says it is best for one player to choose a trickier shot where they have a good chance of getting it in, but their opponent has a good chance of missing. “Whatever difficult shot you choose – standing further away on the three-point line, a reverse lay-up, shooting with your weaker hand – the optimal shot is one that has a 50 per cent probability of making it.”

To make it more mathematically intricate, the co-authors next looked at other scenarios.

Though the mathematics get a little more complicated, the basic idea for how to win HORSE remains the same: under the traditional rules, choose easy shots for the best chance of scoring points. Under the modified rules, shots with a medium level of difficulty are optimal.

With the NBA playoffs nearly over, and warmer days ahead, Rosenthal is looking forward to hitting up the Willcocks Common once again. As a go-to spot for pick-up games in the university community, the court was recently outfitted with new nets and rims.

As Rosenthal puts it, fun papers like this one increase understanding of esoteric mathematical concepts by bringing them to life through relatable examples.

“Some people play sports in the schoolyard and others do math problems in the classroom,” he says. “We’re showing how you can connect these two worlds, using mathematical thinking to figure out what to do on the basketball court.”