'Waist-deep in salamanders and turtles': U of T ecology students conduct field research in Algonquin Park 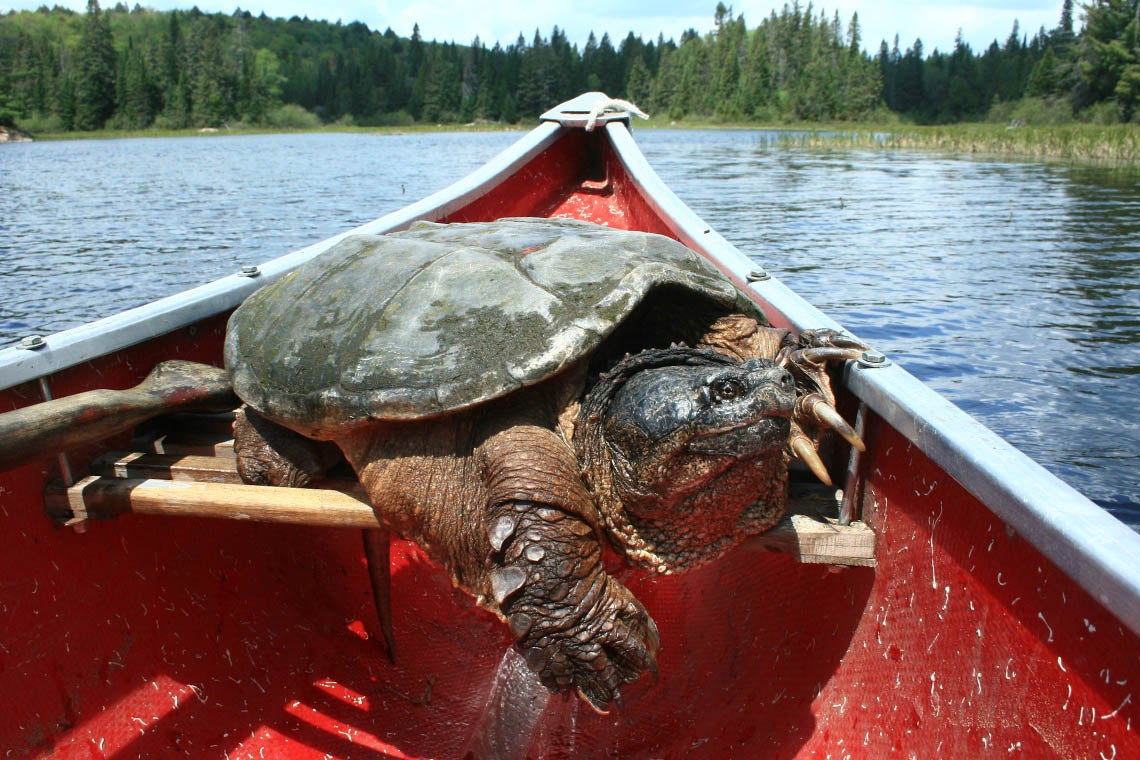 A snapping turtle hitches a ride on a canoe in Algonquin Park, where third-year ecology students collected data and conducted experiments on reptiles and amphibians this summer as part of a research excursion program (photo by Patrick Moldowan)

While thousands of visitors to Algonquin Provincial Park were canoeing and camping this summer, a small band of third-year University of Toronto ecology students was hard at work collecting data and conducting experiments with reptiles and amphibians.

The group was there as part of the Research Excursion Program (REP) offered by the Faculty of Arts & Science. The program provides an opportunity for third-year students to contribute to faculty research and scholarly work in an off-campus setting.

For the students, it was a chance to get their hands dirty and their feet wet and gain valuable field research experience.

Njal Rollinson, an assistant professor in the department of ecology and evolutionary biology, has been conducting research at the Wildlife Research Station in Algonquin for years and has supervised REP students for many summers.

“The Algonquin REP experience is nothing like sitting in a classroom,” says Rollinson. “The students get an appreciation for real ecological fieldwork, experimental design and data analysis.” 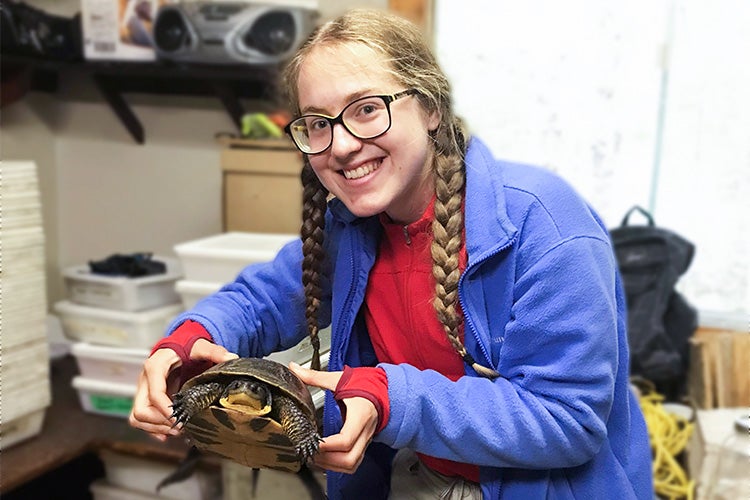 Hayley Vlcek, an Innis College student, holds a Blanding's turtle in the lab at the Wildlife Research Station in Algonquink Park (photo by Jessica Leivesley)

The group of four students lived and worked at the research station, collecting data for Rollinson’s long-term studies on turtles and salamanders, including their size, behaviour, reproduction and habitat use.

“It takes a lot of hands on deck to collect our data,” says Rollinson. “Every year we handle 15,000 amphibians, 500 turtles and about 2,000 turtle eggs. The students are waist-deep in salamanders and turtles.”

For the group, a day at the office meant collecting, measuring, weighing and photographing various amphibians and reptiles; counting salamander egg clusters; digging up turtle eggs, weighing them, then returning them safely to the nest – all while coping with the summer heat, long hours and mosquitoes.

The students also conducted their own research projects.

“I was trying to determine if female turtles preferred nesting in disturbed, loose soil,” says Vlcek, “and whether they find these sites with the help of the smell of organic material coming from the soil. I was interested in this question because nest-site selection has a significant impact on offspring survival.

“What I found was that turtles did indeed prefer nesting in disturbed soil,” she explains, “but that the organic content did not significantly attract them to the site.” 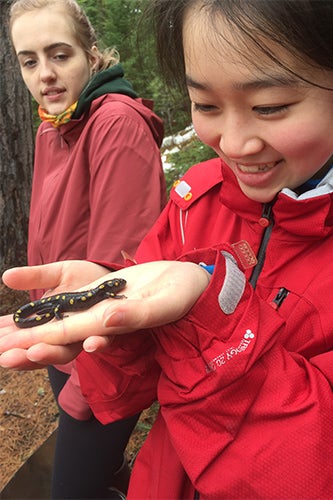 Gloria Gao (left) is a University College student in the ecology and evolutionary biology specialist program.

Both Vlcek and Gao have written papers based on their work and are currently preparing them for submission to peer-reviewed journals – as previous REP students have done successfully in the past.

The work of REP students is vital to Rollinson’s ongoing research in Algonquin. One focus of his work is temperature-dependent sex determination in reptiles. In most species, sex is determined at conception. But in many reptiles, it is governed by the temperature of the nest before the eggs hatch. Cooler temperatures result in more males and warmer temperatures produce more females.

Of special interest to Rollinson is the question: How did this trait evolve?

His best explanation to date – based in part on research done by an REP student in 2018  – stems from two underlying facts. The first is that females lay one clutch of eggs per season while males typically mate many times; i.e. males can pass their genetic material to more offspring than females. The second is that cooler temperatures result in generally healthier eggs and offspring, resulting in a higher rate of mating.

Revese the scenario – warmer conditions and a clutch with more female offspring – and the females are limited in their opportunities to pass on this trait because they lay eggs only once per season. Plus, any males produced in warm environments are less healthy and mate less. 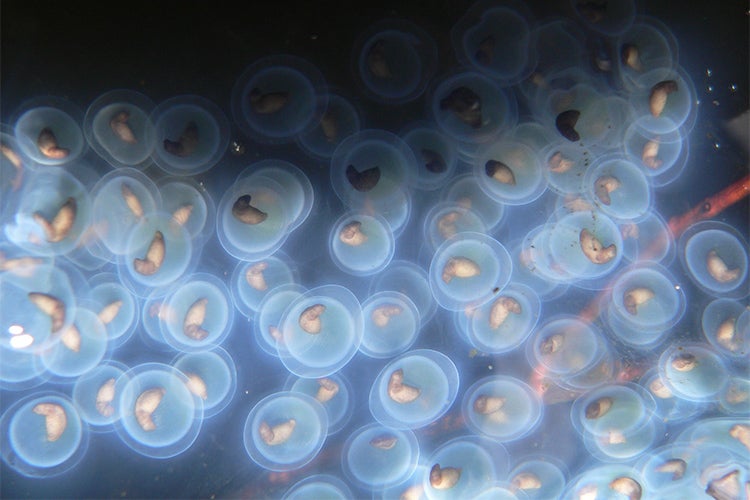 Rollinson has also been studying the effects of a warming climate on the reptile and amphibian populations that inhabit an elevated region in the park called the Algonquin Dome. Historically, the area has been cool with a short growing season, but since the late 1970s it’s been warming rapidly.

“So far, warming seems to be good for these animals,” explains Rollinson. “The growing season is longer, the animals grow larger and produce more offspring in a year.

“But eventually,” he warns, “there will be a tipping point for these populations and the warmer temperatures will start to have detrimental effects on their health.”

His work is also informing conservation practices in the province.

Turtles are among the most imperiled group of animals on the planet and many conservation organizations remove turtle eggs from the wild and incubate them at relatively high temperatures to ensure more females – the thinking being that the more females, the more eggs.

However, Rollinson’s and his colleagues’ research showing that warm temperatures can also be detrimental to the overall health of eggs and hatchlings shows that the best approach is to incubate eggs at a temperature that produces mixed-sex clutches that are healthier overall. 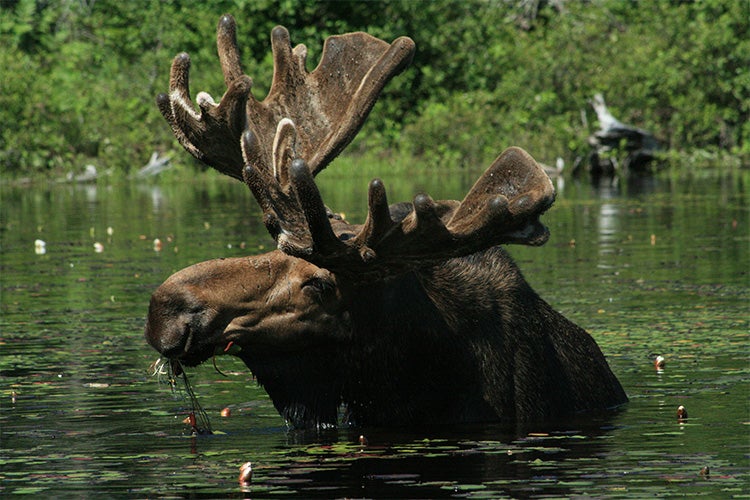 Salamanders, turtles and frogs weren’t the only wildlife the researchers encountered, as evidenced by this bull moose (photo by Patrick Moldowan)

The REP generates new research and scholarly results and is invaluable training, but it also provides undergrads with a fun and memorable experience.

The students found time to enjoy – despite the mosquitoes – the attractions that bring thousands of visitors to Algonquin every year. They hiked, biked, canoed, kayaked, saw plenty of non-amphibious animals like moose, and generally enjoyed being away not just from the classroom but the city as well.

“One night the other REP students and I canoed out into the middle of a lake to look at the night sky,” recalls Vlcek. “The stars were the brightest I’ve ever seen them and you could even see the Milky Way.”

The Algonquin experience also provided students with valuable insight into their future careers.

“This summer gave me confidence that I am pursuing the right program,” says Gao, “and that I’d like to do similar field work for my post-graduate studies.”

“My original plan was to graduate, then work in environmental policy-making,” says Vlcek. “But because of this experience, I’d now like to pursue graduate school instead and continue doing research in ecology and evolutionary biology – research that can inform conservation and management projects.

“This experience has changed my life.”