Plants in Ontario park consume salamanders with 'striking frequency,' U of T and Guelph researchers find 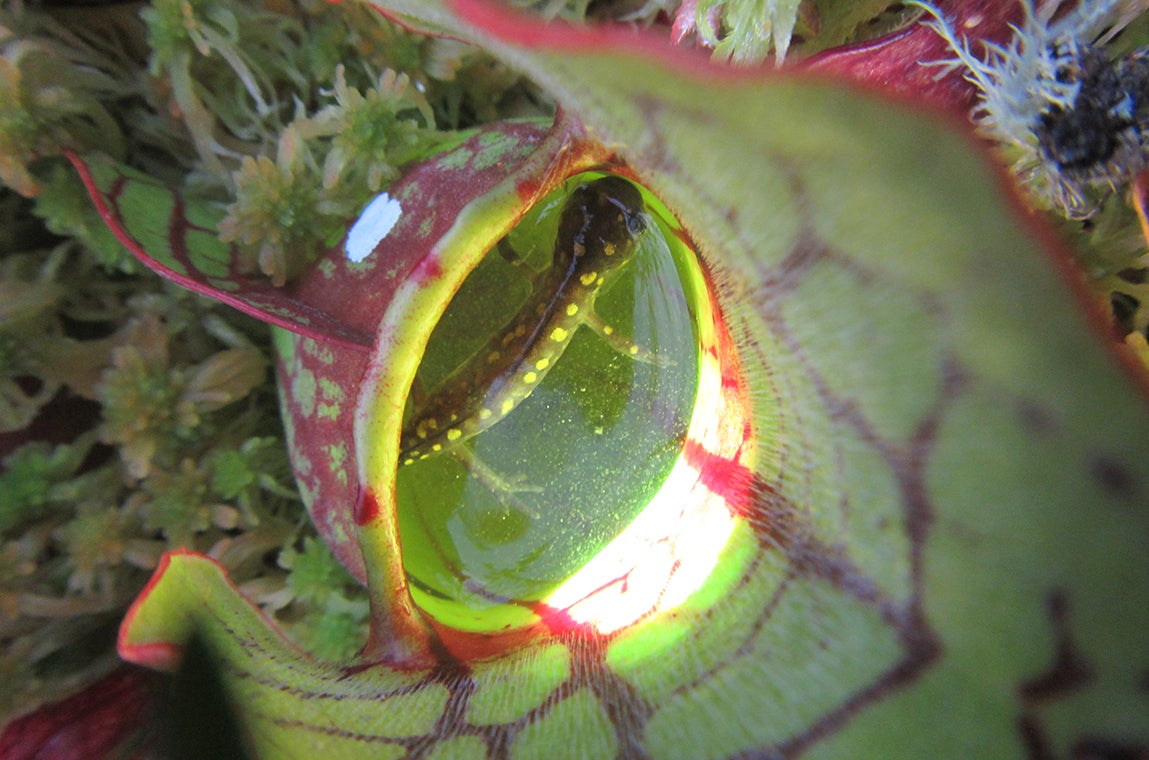 A salamander caught inside a pitcher plant. U of T and Guelph University researchers have found that many salamanders fall prey to these carnivorous plants in Algonquin Provincial Park (all photos and video courtesy of Patrick Moldowan)

At just a few months old, many emerge from water in Algonquin Provincial Park only to end up trapped in a pool of rainwater and digestive enzymes inside the bell-shaped leaves of a carnivorous pitcher plant. There, they can survive almost three weeks before they finally die, decompose and become plant food.

University of Toronto and University of Guelph researchers searched the contents of pitcher plants in a lake bog in a western section of the park, discovering they consumed vertebrate prey “with a striking frequency,” contrary to accepted wisdom. They published their findings this month in Ecology. Surveys in the late summer of 2018 revealed nearly 20 per cent of the plants contained salamanders, including those still alive and those in various stages of decay.

Co-lead author Patrick Moldowan, a PhD candidate in the department of ecology and evolutionary biology in U of T's Faculty of Arts & Science, investigated the plants on a hunch that they snacked on salamanders more often than people think. Researchers had assumed that the pitcher plant’s diet was made up almost exclusively of insects.

The first time he peered inside a pitcher plant and saw a moving salamander, it tugged at Moldowan's conscience. “When I knelt down and saw the first one swimming and struggling to get out … I thought, you know, maybe I should rescue it,” he says in a phone interview from the Algonquin Wildlife Research Station. “And then I sort of thought, well, you know, you got caught fair and square.”

Why salamanders enter the pitcher plant remains a mystery. But Moldowan and his co-researchers have some ideas. One theory is that young salamanders see the pitcher, ironically, as a refuge. Another possibility is that they fall into the trap pursuing insect prey or visit the plant to feed on its nectaries. A third explanation is that it’s simply random – a cruel twist of fate.

According to the researchers’ observations, the plants are a “non-trivial source of mortality” for baby salamanders. It’s possible that up to five per cent of young salamanders end up in the jaws of a pitcher plant each year. Some of the plants contained the remains of more than one salamander. Assistant Professor Njal Rollinson, a co-author of the paper, U of T ecologist and Moldowan’s supervisor, says he was stunned by the findings.

“To understand how bizarre this is, you have to appreciate that this is a secretive salamander that spends almost all of its time under logs or in burrows underground,” he says.  “Yet, here we have baby salamanders climbing up an exposed plant stem that is several times the salamander's height and throwing themselves into a soup of enzymes and detritus.

“Something fishy is going on here,” he adds, “and I suspect it is no accident that salamanders end up in the pitcher. We want to understand what is going on, and we have a lot of work to do.”

The vast majority of baby salamanders who are unlucky enough to find themselves in the belly of a pitcher plant are in store for a drawn-out demise. The researchers found that salamanders could live up to 19 days inside the plant. 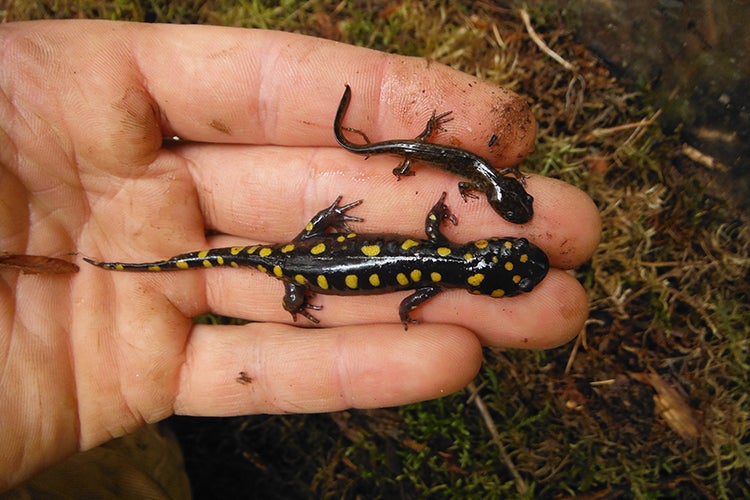 What causes their death is unclear. Some scientists have suggested that newts killed in pitcher traps drowned through the effects of low pH. Some speculate that prey die of infection or exhaustion. The U of T and Guelph researchers, however, propose that the salamanders die of excess heat (“thermal stress hypothesis”) as they swim around in a bath fully exposed to sunlight. To make matters worse for the salamanders, Moldowan suspects some “clever birds” visit the plants looking for an easy meal.

But there is a tiny glimmer of hope for the trapped salamander. Heavy rain can flush the pitcher plant’s leaves and give the salamander a slim chance for a Houdini-like escape. The leaves typically hold about half the volume of a plastic water bottle.

Moldowan says he felt for the salamanders because they are the “unsung heroes of our northern wetlands and forests.” They play an important role as a “nutrient-cycling link between land and water,” he explains. “If you like clean drinking water, you can probably thank a salamander somewhere down the line.”

Even still, Moldowan felt it wasn’t his place to interfere with the circle of life. “You can’t help but feel for them, right?” he says of the salamanders. “But this is nature in the raw. It’s not lions chasing wildebeest or zebra on the Serengeti, and it’s not a hawk coming down grabbing a snake or a rabbit in an open field. But nevertheless this is predator-prey interaction – granted the tables are a bit turned.”

The researchers received support from the Natural Sciences and Engineering Research Council of Canada and a Connaught New Researcher Award.