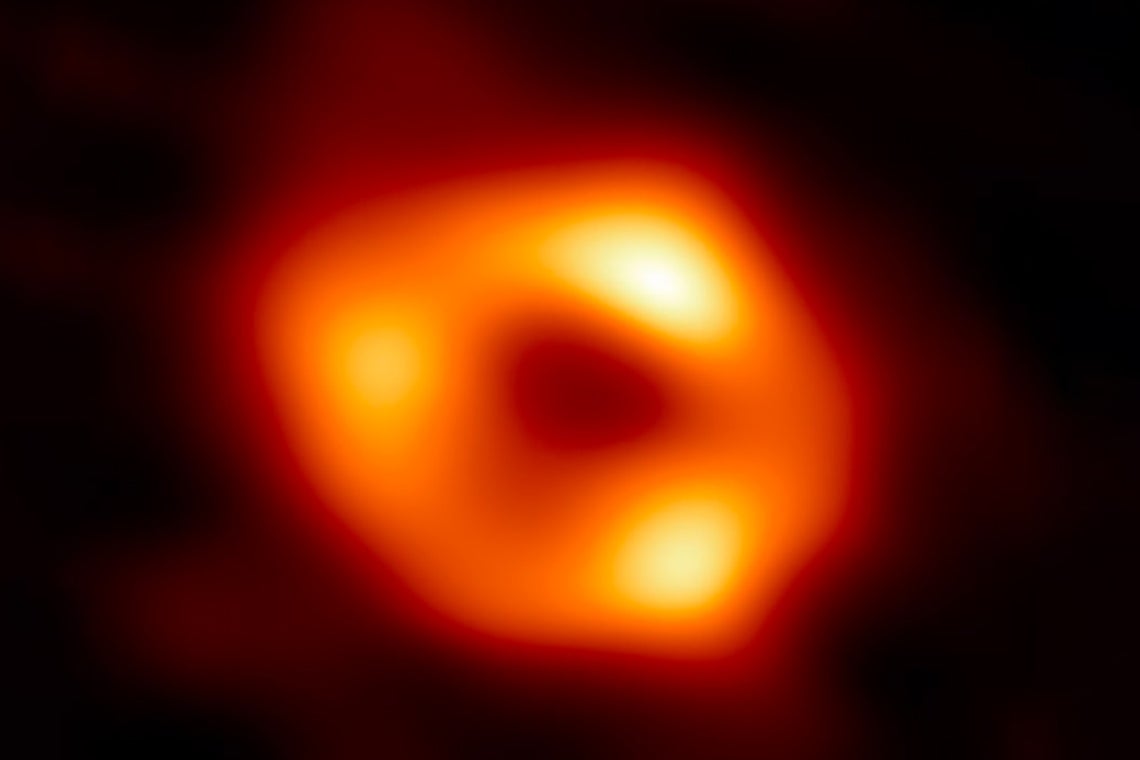 The first image of Sagittarius A*, or Sgr A*, the supermassive black hole at the centre of our Milky Way galaxy (Image by Event Horizon Telescope Collaboration)

Astronomers this week revealed the first image of the supermassive black hole at the heart of a galaxy not so far, far away – our home galaxy, the Milky Way.

Scientists had previously observed stars orbiting around something invisible, compact and very massive at the centre of the Milky Way. Known as Sagittarius A*, or Sgr A*, the object was strongly believed to be a black hole.

The Event Horizon Telescope (EHT) collaboration is the international research team behind this groundbreaking achievement, involving over 300 scientists from 80 institutions around the globe. The EHT team linked together eight existing radio observatories across the planet to form a single Earth-sized virtual telescope to provide the first direct visual evidence of Sgr A*. The telescope is named after the event horizon, the boundary of the black hole beyond which no light can escape.

It is just the second image of a black hole to be captured after EHT revealed the first-ever image of M87* in the distant Messier 87 galaxy in 2019.

He recently shared his insights with writer Josslyn Johnstone on the discovery, the results of which were published May 12 in a special issue of The Astrophysical Journal Letters and showcased at simultaneous press conferences held around the world.

What makes this new, second image of a black hole so important?

Scientifically, this discovery is a very big deal because Sgr A* is more than a thousand times closer than M87* – about 27,000 light-years away versus 53 million. We can study it in much finer detail and can do so much more with it than with an object that’s very far away and barely measurable.

This black hole being in our home galaxy – as close to home as you can get when talking about outer space, anyway – makes it that much more fascinating and immediate. I liken it to this: It’s one thing to discover an ancient dinosaur bone, and another entirely to see a live dinosaur right in your backyard.

It is an astounding collective achievement where researchers collaborated across continents, countries, cultures and time zones to make it happen. It shows what amazing things can happen when people work together.

If this black hole is so much closer, why did researchers first capture an image of M87*?

When seen from Earth, the angular size of both black holes is similar. However, M87* is not only much further away, but it is more than a thousand times bigger and more massive than Sgr A*. It's like the moon and the sun – they appear roughly the same size from Earth, but the sun is much larger.

It is hard to make an image instantly because we don't have all the information – the missing pixels, so to speak. Ideally, you would cover the whole Earth with telescopes but, of course, we don't have that many. We had eight telescopes capturing data at any given time. So, to fill in the gaps on the planet where there are no telescopes, where there is no data, we wait for the Earth to rotate.

Because the black hole that is farther away is much bigger, it rotates more slowly. That makes is easier to scan across the black hole and make one image. The black hole in the centre of our own galaxy is much smaller and varying intrinsically – meaning, instead of scanning a static snapshot of an object, you are trying to reconstruct something that is constantly changing as you look at it. It's tricky to disentangle what is due to the earth rotating or the black hole rotating, because they are both changing. That's why it took so many years longer to image Sgr A*, even though the data for both black holes was collected in the same 2017 period.

Is this why there is such a visual difference between the Sgr A* and M87* images?

Right – unlike the 2019 M87* image, which was one clear picture of a black hole, in this case it is a series of images that are reconstructions of what Sgr A* might look like. It is not as distinct, where you can say, “This is it.” Instead, it is a Platonic master image with variations of what it could look like: “It may look like this, or it may look like that.”

It’s like taking a picture of a fast-moving object, like a baseball, on an SLR camera – the ball is moving at the same time as the exposure, so you end up with a distorted image.

What questions are we hoping to answer with this new image?

In a sense, by capturing that first image of the black hole that was farther away, we still had the same questions … then had even more. I think the image of Sgr A* holds all the answers, or at least a lot of them, because we’re able to get that much closer to see what’s going on. We already knew the black hole was there. Now we have a hope of understanding why black holes exist and how they form by studying the surrounding environment. My primary research interests are the compact objects near the black hole called pulsars, so I am looking to measure pulsars in the same dataset.

Now that we have the image, what are the researchers working on next?