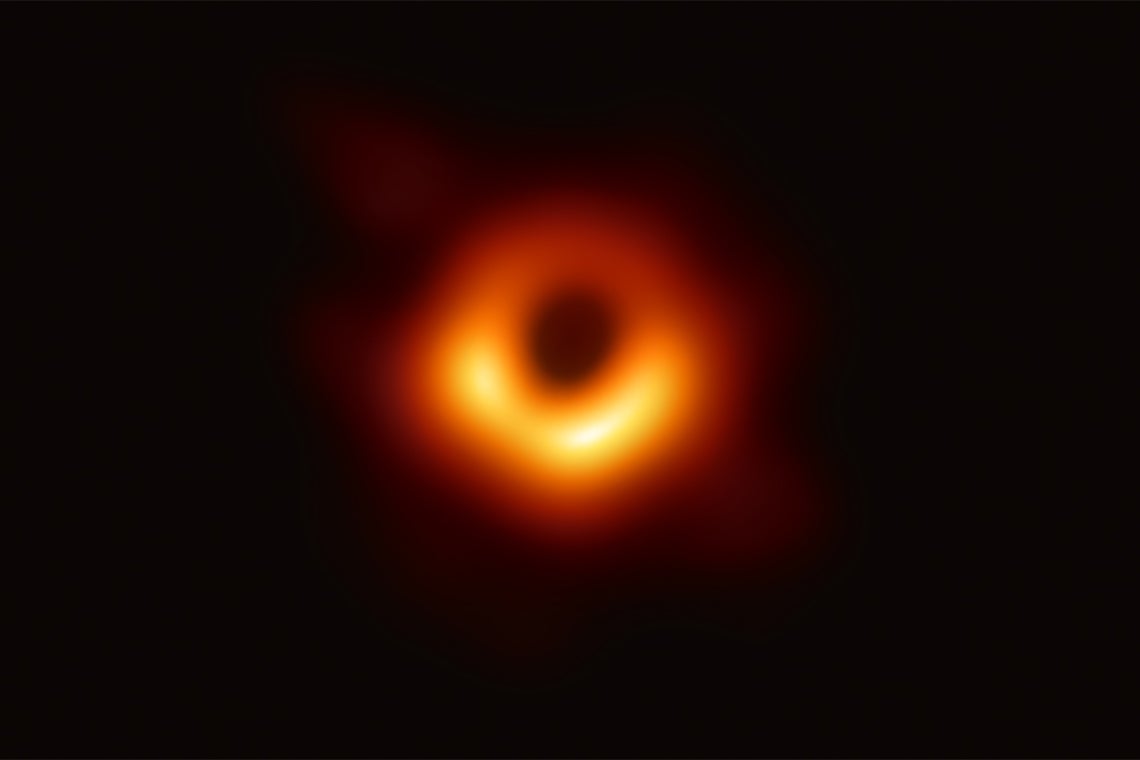 The first-ever image of a black hole, at the center of the Messier 87 galaxy, was captured through a broad international collaboration that included U of T researcher Ue-Li Pen (photo courtesy of U.S. National Science Foundation)

The appearance of a black hole has been the stuff of scientists' predictions and sci-fi writers' imaginations – until today.

In press conferences held on three continents, an international team of scientists announced they had taken the first-ever picture of a gargantuan black hole. The Event Horizon Telescope (EHT) collaboration, involving eight ground-based telescopes across the globe, targeted two supermassive black holes: Sagittarius A*, which is 26,000 light-years from Earth at the centre of the Milky Way, and one in Messier 87, a giant elliptical galaxy in the constellation Virgo.

The scientists successfully captured an image of the black hole and its shadow in M87. The black hole is 55 million light-years from Earth and has a mass 6.5 billion times that of our sun.

"If immersed in a bright region, like a disc of glowing gas, we expect a black hole to create a dark region similar to a shadow – something predicted by Einstein’s general relativity that we’ve never seen before,” said Heino Falcke of Radboud University, the chair of the EHT Science Council, in a news release.

"This shadow, caused by the gravitational bending and capture of light by the event horizon, reveals a lot about the nature of these fascinating objects and allowed us to measure the enormous mass of M87’s black hole."

As interim director of the University of Toronto’s Canadian Institute for Theoretical Astrophysics, Professor Ue-Li Pen played an administrative role in the global collaboration that brought these black holes into focus.

Pen, who is also an associate faculty member at U of T's Dunlap Institute for Astronomy & Astrophysics, spoke to U of T News about the scientific team effort that generated our first look at a black hole. Who are the scientists working in the Event Horizon Telescope collaboration and what are they doing?

It's a collaboration of hundreds of over 200 scientists from 13 institutions and many countries. It's a global initiative. In order to have such a high-resolution image, which has never been done before, you use the Earth's size as your telescope. You're connecting telescopes across the planet to make one coherent image.

The telescopes involved are in Chile, Spain, the U.S., Mexico and Hawaii. There is another at the South Pole used indirectly for calibration.

How do these telescopes work together?

They simultaneously observe the object through a technique called VLBI (Very Long Baseline Interferometry). They record the voltages of the light, you ship the disks to one place and you combine the voltages to form an image. At the end of the day, this is the image of a black hole.

The scientists looked at two black holes specifically. One in our galaxy and another in a neighbouring galaxy. Why did they choose these two?

These are the largest black holes as measured in angular size in the sky. So the one in our galaxy, of course, looks large because it's nearby, and the other is intrinsically much bigger but further away, but similar in angular size.

Can you explain what's meant by the event horizon?

It's the boundary around a black hole – the point of no return. Things can only go in and never come out. It's a one-way street.

So how can we take a picture of a black hole, if even light disappears beyond the event horizon?

By picture, we mean a shadow. The black hole is this black thing in the middle where no light is coming from. It is the absence of light that makes you say it's a black hole.

What is the ring we see around it?

Black holes often appear in science fiction as a scary phenomenon. Do we have any reason to fear that we will be sucked into a black hole anytime soon?

Unlikely. It's unlikely that there is any black hole nearby. We are searching very hard and these are all very far away.

What were some of the challenges involved in getting pictures of a black hole?

There was a combination of challenges. The two biggest telescopes were not really completed until a few years ago. The two big players are the Large Millimeter Telescope in Mexico – I visited that telescope last spring – that's the world's biggest telescope at that wavelength. The other is the ALMA  telescope (Atacama Large Millimeter/submillimeter Array) that was recently finished and only recently has had the ability to take data in the right form.

They also had to overcome technological challenges observing at these high frequencies. The data rate is enormous. Being able to process it wasn't possible until a few years ago.

How did you react when you first saw the pictures of the black hole? Were you surprised?

Surprised is probably the wrong word because this was kind of known since Einstein's days. It confirms the theory that was proposed 100 years ago. In that sense, it's not surprising. It's like the LIGO event a few years ago (the direct observation of gravitational waves) that was also predicted by Einstein.

What I personally find interesting, which may not be the same as what my colleagues think, is that it gives us, for the first time, the ability to use a black hole as a tool.

What do you mean?

That opens the path to use black holes as a new tool. One of the things I'm interested in is thinking of ways of understanding the nature of space-time, quantum gravity. This is the first step. This is not the end – it's the beginning of a way of measuring black holes.

What are the next questions people are going to be asking about black holes?

I think the big question that was even evident in Einstein's days was: What happens with quantum mechanics and gravity?

We don't know how to reconcile the nature of quantum mechanics, which is a probabilistic description of the world, with general relativity, which is a deterministic description. There's a mystery, and the black hole is a place where these two effects come head-to-head.

In other words, we might be able to observe phenomena that explain or offer some clues into quantum mechanics and gravity?

Exactly – how these two interact.

How much time and effort went into this collaboration?

If you look at how science happens, it's often through long-term efforts. It's one of those things that in our society is not that appreciated, and which our political system makes difficult to set up.

Einstein theorized this 100 years ago, and it's been a 100-year path to get here. This is a long-term effort. Even the Event Horizon Telescope collaboration took 10 years to set up this network of telescopes. The telescopes weren't built for the collaboration. It was an international effort, and that's something that requires a lot of positive will from people of different backgrounds, with different ideas and different funding schemes. They had to be committed for the long term.

That's something which I think we need more of. The world would be a better place if we could work together.