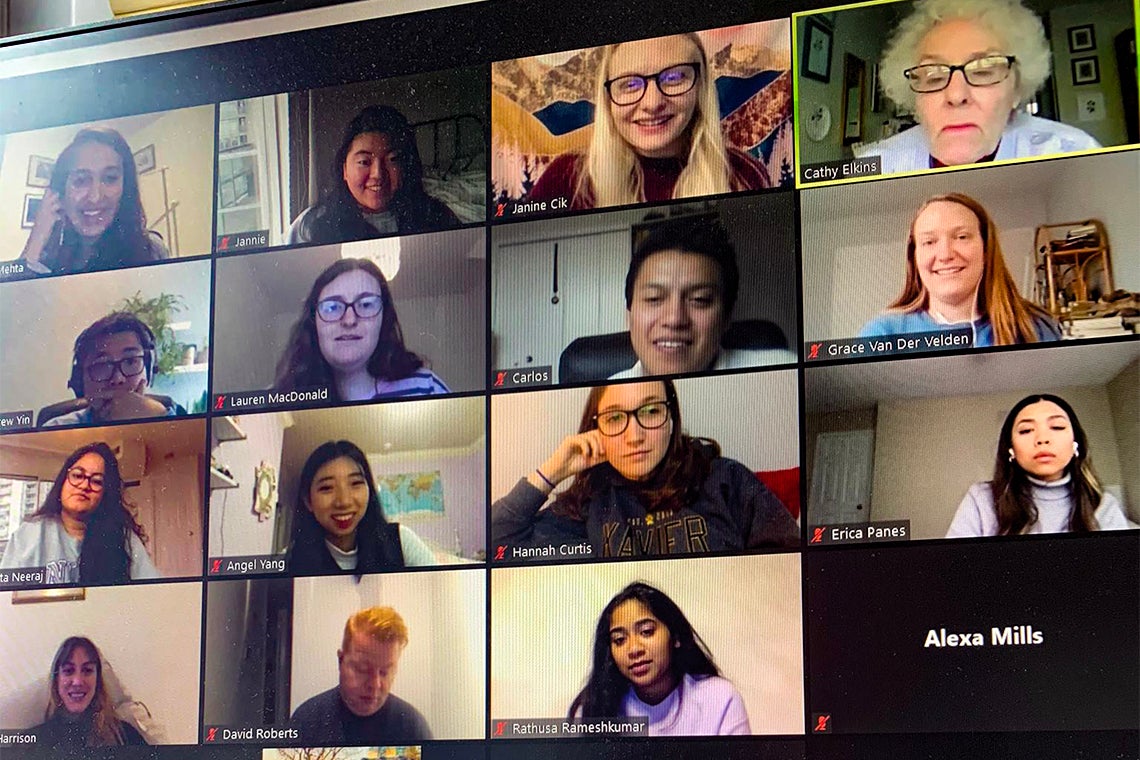 In response to COVID-19, Aditi Mehta, an assistant professor of urban studies, paired students with seniors over Zoom for her qualitative methods course – prompting friendships to blossom during a difficult time (photo courtesy of Aditi Mehta)

In one of her recent classes, Hannah Curtis did something unexpected in a time of physical distancing: she made a new friend with someone who is more than five decades her senior.

The University of Toronto fourth-year student got to know Bill Bartlett, a resident of True Davidson Acres long-term care home, via Skype. In wide-ranging video calls that often lasted over an hour, Curtis learned about the danger and stigma Bartlett and his friends faced as gay men in Toronto during the 1970s and later during the HIV/AIDS epidemic.

The unlikely friendship blossomed after the two were paired for an oral history research project, part of the seminar course INI342H1 taught by Aditi Mehta, an assistant professor of urban studies, teaching stream, at Innis College and American journalist Alexa Mills.

Prior to COVID-19, Mehta instructed her students to research a public space like Toronto’s Nathan Phillips Square. This year, however, she reimagined her qualitative methods course by arranging for students to interview elders who were based in retirement communities in Toronto and Columbus, Ohio.

“In urban studies, especially North American urban studies, you learn about processes such as suburbanization or the construction of highways,” Mehta says. “It was really cool to see the students hear about people’s lived experiences of those historical processes, which doesn’t normally happen.”

Mehta was inspired to connect her students with elders after reading about seniors who were separated from their loved ones because of measures put in place to control the pandemic. Her goal was to foster a relationship between students and elders at a time of scant opportunities for social interaction, and to get her class to learn about the past through the stories of people who lived it.

It didn’t take long for Curtis, a 21-year-old urban studies major, and Bartlett, a 76-year-old former chef, to hit it off. After learning that Curtis grew up in the United Kingdom, Bartlett teased her about English cuisine.

“You must have grown up on some pretty bland, beige food,” he once told her.

There were, in fact, a lot of boiled vegetables in her childhood, she agrees.

After Curtis told Bartlett she identifies as queer, they discussed the nature of the word and how it evolved from its status as a slur in his day. Bartlett described what it was like having to hide a central part of his identity in public and the sense of relief he felt when he was in a place where he could be himself.

“He mentioned that teachers, doctors and others who worked in the public sector had to enter and exit queer spaces through the back door,” Curtis says.

When Bartlett went out to a gay bar, he made sure to park his flashy red convertible blocks away so he wouldn’t be spotted, according to Curtis.

“It was the personal connection with one another, I think, that’s how we were able to delve into some difficult topics,” Curtis says. “It almost felt like we both got it … there was no explanation needed.”

Each of the other students in the small class took their projects in an original direction. One connected with a retired professional clown to explore the role of humour as medicine in hospitals, while another focused on the waves of immigration that shaped the Cabbagetown neighbourhood in Toronto’s east end.

By chance Angel Yang, a third-year student, was matched with a senior who comes from Steveston, B.C., a historic fishing village near Vancouver that is only a 10-minute drive from Yang’s family home. Nancy Yano (who previously went by the surname Terauchi), who is the daughter of Japanese immigrants and was born in 1942, described her early memories of Japanese-Canadian internment during the Second World War, when some 21,000 Japanese in B.C. were detained under the War Measures Act and their property seized.

“Her entire family was interned and actually split up,” Yang says, “so she, her mom and her siblings stayed in B.C. and her grandmother was sent to Manitoba, and her father was sent to northern Ontario.”

Only a few years old when she and her family were transferred to an internment camp, Yano’s most vivid memory from the time is of picking wild strawberries with her sister.

After the war, Yano’s family settled in Manitoba and she later moved to Toronto and worked as a secretary in a law firm.

Yang took the project one step further by interviewing other people who lived in Steveston during the war or shortly thereafter as well as the chair of the local Japanese Canadian Cultural Centre.

For Yang, interviewing an elder left a bigger impression than a typical university assignment: The two grew close over many hours of talking online.

On one occasion, Yano showed Yang her wedding album with black-and-white pictures of her younger self getting married on a snowy day in Toronto. “Nancy, since she’s also Asian and I’m Chinese – I felt like she was the grandmother I never had,” Yang says.

Mills, the journalist who taught the course with Mehta and works as a writing coach at the New York Times, says she hopes the students learned that everyone has important stories to tell, and that they learned to listen.

“Some people dedicate their lives and careers to storytelling, but all of us humans have the capacity to tell a good story,” she says.

“University is a great place to learn that skill because storytelling is part of every subject and discipline. No matter what data you take in, no matter what you research – it helps to be able to express what you learned in a digestible format.”

What began as a course redesigned for COVID-19 restrictions may live on long after the pandemic.

“I may continue teaching the class this way because there's so much to learn about your city from elders,” Mehta says.

Yang, for one, plans to keep in touch with Yano by old-fashioned mail.

“I’m so glad I met her and am grateful for the things that she taught me.”