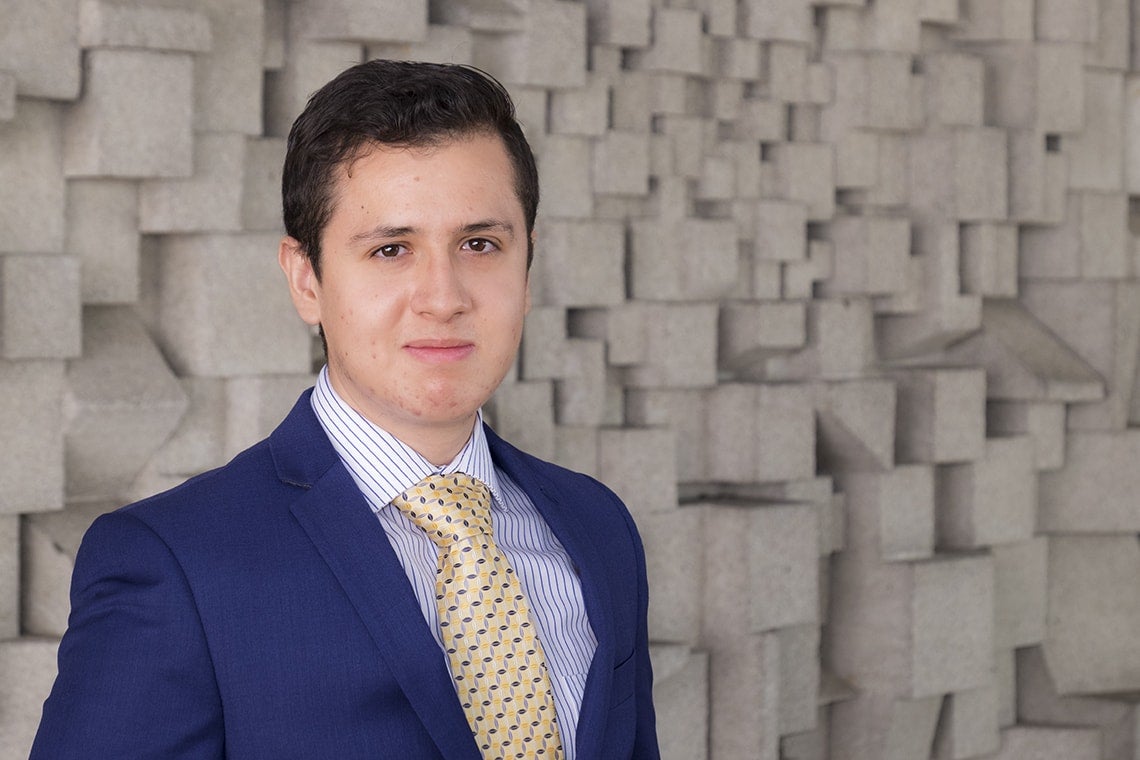 Joan Romero was able to study at U of T by earning a Schulich Leader Scholarship, an academic award for promising students who want to study STEM in university at the undergraduate level (photo by Geoffrey Vendeville)

When he was 14 years old, Joan Miguel Romero lost his father to pancreatic cancer. That led him to want to study the pathobiology of disease and conduct cancer research.

Thanks to a Schulich Leader Scholarship, he was able to come to U of T to explore pathobiology in the fall of 2013.

The academic award program was established a year earlier by Canadian businessman Seymour Schulich and funds 50 undergraduate scholarships per year of between $80,000 and $100,000 each.

Read more about Schulich Leaders at U of T

Romero's first year in university was marked by strong friendships and intellectual challenges, he said in a blog post. “Despite what you think your limitations are, you are always able to achieve even more than you can imagine,” he wrote in 2014.

He graduates this month and plans to continue his studies with a master's in laboratory medicine and pathobiology at U of T this fall. He spoke to Xarissa Thompson in U of T's office of university advancement about what brought him here and the impact that the scholarship has had on him.

How did you find out about the Schulich Leader Scholarship?

My high school guidance counsellor told me about the opportunity. It was very new then – it was only the second year it was offered – so a small group of us applied and I was selected by the school to have my nomination put forward.

What drew you to U of T and Victoria University in the University of Toronto?

I always wanted to attend U of T. In Grade 11, I applied to a mentorship program in genomics and pathobiology at the University and found out that they had an undergraduate pathobiology program, so from that point I knew I wanted to be a part of that. My underlying interest for entering that program was my father’s passing of pancreatic cancer when I was 14; this has driven me to study the pathobiology of this disease.

In terms of colleges at U of T, I liked the idea of attending Victoria College because it was very student focused, which complemented studying at such a big university.

The Vic One program was another reason I chose Vic. But another strong reason was Vic for a Cure. It was very similar to a club I’d started in high school, Bigger than Cancer, and I wanted to be a part of this during university. I’ve learned about the mechanisms and manifestations of various diseases in lectures and that has been very fulfilling, but I wanted to actively help in fighting this disease.

This year, I served as a co-president for Vic for a Cure, which allowed me to continue my passion of helping raise money and awareness for cancer research.

What impact has the Schulich Leader Scholarship had on your university experience?

Because of my father passing away from cancer, going to university without this financial support would have been difficult.The scholarship has given me the opportunity to focus exclusively on my studies and extracurricular involvements.

Additionally, participating in cancer research during my summers allowed me to gain a deep appreciation for, and interest in, scientific research.

What are your plans for next year?

This upcoming academic year, I plan to pursue an MSc degree in the department of laboratory medicine and pathobiology at the University of Toronto, studying cancer. Ultimately, it is my goal to become a clinician-scientist, researching immunotherapy in pancreatic oncology.

Read the full Q&A with Romero