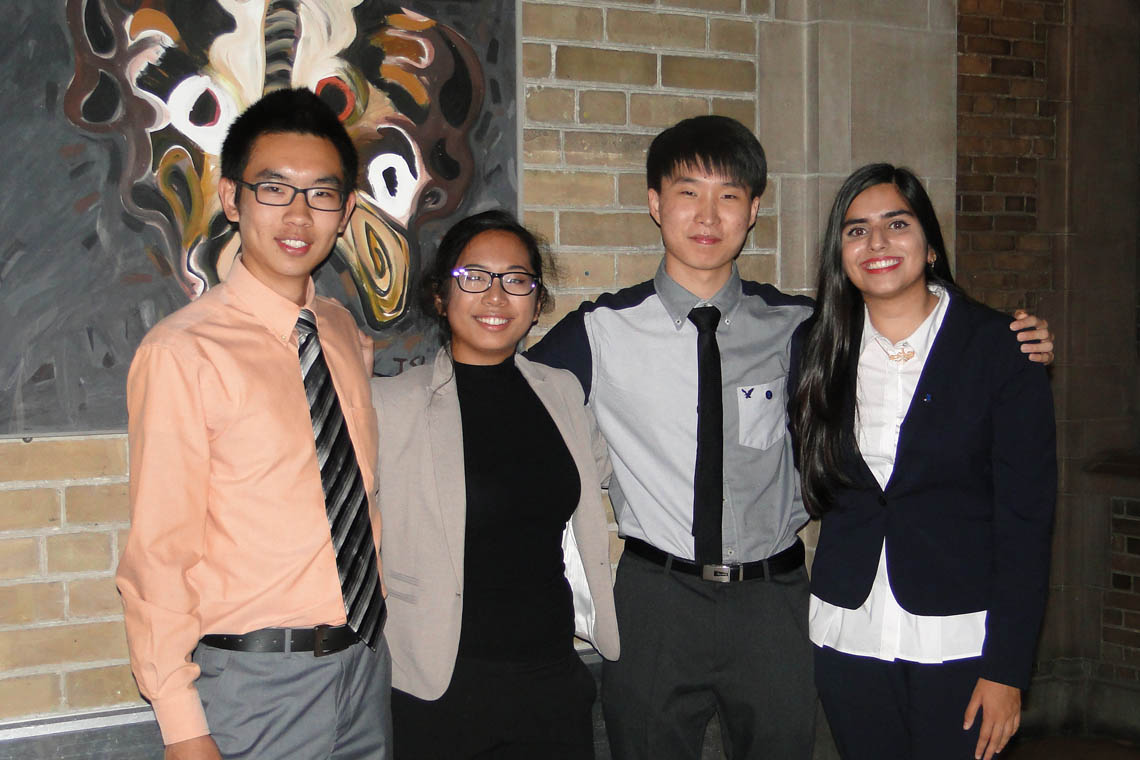 One launched a YouTube channel called NerdyAndQuirky. Another built an electric skateboard using spare parts from old remote controls and cars. All four are passionate about volunteering.

Kevin Han, Jun Ran (James) Xu, Haleema Khan and Sabrina Cruz – undergrads in their first year at the University of Toronto – are also recipients of the prestigious Schulich Leader Scholarships.

The awards were created by Canadian business leader and philanthropist Seymour Schulich in 2011 to encourage promising high school graduates to embrace STEM (Science, Technology, Engineering, Mathematics). This year, more than 1,500 students from across Canada competed for 50 scholarships, valued at up to $80,000 each.

“It is very important that we support exceptional students that demonstrate great leadership and embrace STEM fields,” said Schulich. “It is an investment not only in their future, but the future of our country. Their pursuits are sure to lead to key innovations in the years ahead.”

U of T News spoke to the four students about the scholarships and their experiences as new students at U of T.

Why did you choose to attend Innis College?

I grew up outside of Toronto and one of my favourite things to do was hop on a train and explore the city. I knew that choosing the University of Toronto would give me my dream education and home – but coming from a small community, I didn’t want to be overwhelmed or lost in the shuffle of a giant university, so I chose Innis. And it’s been a fantastic idea, because I made some great friends during Orientation Week.

What drew you to STEM?

As much as I love the arts, I never felt the same affinity with drawing as I do with math. It’s a language of its own. It’s frustrating, fascinating, but most of all, it’s honest. I really love the applications of math – using it for forecasting and analysis. The reason I want a career in the STEM field is to use this amazing, universal language that I love to better understand the world around me. I’d like to work in some sort of data management field, but who knows where the future will take me.

You have a YouTube channel called NerdyAndQuirky. How did you get started as a YouTuber?

Like a lot of kids, I watched videos from the big YouTubers and became convinced that I could do this. So I convinced my parents to buy me a video camera – I always loved making my own Claymation movies. One early movie I made was with finger puppets. It was terrible. I think I lost it right away, but I enjoyed doing it. I’ve been inspired by people like the Vlogbrothers and Charlie McDonnell who use their platform to celebrate knowledge and build community. I try and do that on my channel with vlogs retelling relatable experiences and my video series, Cool History.

In addition to your YouTube channel, what are some of your social activities?

I started an organization with a friend from high school called Create in Kind. We work with charities and non-profits to address branding needs – we design logos, promotional videos and capture event photography. We’ve worked with organizations like United in Play. Just like us, it’s pretty new.

What attracted you to U of T?

I chose the University of Toronto because of its international reputation, the variety of specialties and the quality of its professors. I was also interested in the engineering science program, which allows students to experience a number of fields before choosing what they want to specialize in.

Tell us a bit about your volunteer work.

I came to Canada from China in the 8th grade. It was hard to catch up, particularly while learning English. When my family moved to Aurora before high school, I started to teach skiing to people with disabilities as a way to meet people in a new community. I wanted to do something to get beyond the language barrier, and I wanted to help people. My students have really inspired me to pursue my goals. I helped them, and they helped me to try harder and I started to do really well in school. The current student I work with has weak leg muscles and non-verbal autism. She can communicate through "yes" or "no" questions – it’s very important to communicate clearly in skiing. You have to know where you’re going, the turns have to be perfectly synchronized. I used to be very shy, but learning to communicate with different people has helped me get better at breaking the ice.

Why have you decided to pursue a degree in engineering?

Both of my parents are electrical engineers. Since I was little they have been sharing their knowledge with me. They always encouraged me to question things and work hard. In elementary school, I had a toy where you’d press a button and it would make a sound. I remember once it stopped working and I took it apart. I think it was just a loose connection, and when I touched it the connection came back. And ever since then I’ve been interested in building things. I bought a screwdriver set and started to break everything I had. My parents encouraged me to understand the workings of very simple things.

When we moved to Aurora I had a garage to myself and power tools to try to build things. I made a boomerang, which took a lot of experimentation. I also made an electric skateboard – it took me three years. I made it with parts from remote control cars, boats, you name it. These projects confirmed my interest in engineering where I can invent, design, and create.

What drew you to Victoria College?

When I first saw pictures of the college online I was struck by its beautiful architecture and how community-oriented it is. It has really remarkable alumni, like Lester B. Pearson and Margaret Atwood, and it’s inspiring to think about walking the same paths as those leaders.

Also, I came to Canada from Pakistan when I was five, and I lived in some very small communities. First in a small town of 1,000 people in Saskatchewan, and then in Timmins. My family moved to Niagara Falls before I started high school, so that we could live in a community where it was easier to find a mosque and halal food. Toronto is the largest city I’ve ever lived in. I’m so excited to meet everyone, share ideas and build networks. That’s a big part of why I wanted to come to U of T. You meet so many great people and get to drive yourself forward through those connections.

Tell us about some of your activities and/or volunteer work.

When I was in grades nine and 10, I was on Niagara Falls’ Mayor’s Youth Advisory Committee, and I served on Student Council, which really let me empower youth to make positive changes in their communities. I was Student Council Prime Minister in grade 12 and was able to coordinate events for my school such as the Niagara Falls International Marathon, which starts in Buffalo and runs along the Niagara Parkway, and our school’s lipdub. I’ve always really loved to do things that represent the student voice. I’m an extrovert, so I enjoyed being the face of the student body. It really forces you to put yourself out there and talk to everyone.

I co-founded the Multicultural Club at my school, which focuses on celebrating the school’s diversity by allowing students to understand and experience different backgrounds through an annual Multicultural Night. I have also volunteered at the local hospital in Niagara Falls where I helped senior patients with their personal needs and led gentle exercise sessions for them. I think that giving back to the community has been one of the most rewarding things, and I look forward to contributing to my community in any way that I am able.

What drew you to STEM?

I have always had an interest in the sciences and mathematics. My father is a mechanical engineer and has been one of my biggest influences. I believe that the STEM field encourages students to harness these principles to make revolutionary, creative ideas come to life. I love the idea of applying my knowledge of science towards positive service. I am planning a double major in neuroscience and health and disease. One of the things I love about studying life sciences is that you have the opportunity to cater a program to your own interests. I am hoping to go on to medical school, where I can combine my passion for science with my desire to help people.

Tell us a bit about your volunteer work.

I started volunteering in grade 10 with Chill Zone, which worked with under-privileged elementary children who needed help in school, or a place to go and do something fun like arts and crafts, games and sports. When I started grade 10, I was at a new high school, and I felt really lucky to be in a community that was new because it gave me so many opportunities to create traditions and lead the way. I saw the Inside Ride, which raises money for a pediatric cancer foundation, and presented it to our student council. Students, teachers or community groups would form teams of six and come up with crazy costumes around a theme, and then they’d ride a stationary bike to raise money. Our first year, we had no expectations so we set our goal at $3,000 and then raised $10,000. It built from there and we eventually raised $50,000 over three annual events.

Why have you decided to pursue a degree in engineering?

I’ve always had a strong interest in the STEM-related subjects. I found new STEM discoveries or inventions in the news fascinating, and I wanted to replicate those success stories in my own way. After my undergrad, I want to continuing pursuing higher education with either a master's degree or an MBA program to complement my career as an aspiring innovator. In terms of my engineering major, I am currently open-minded with a wide range of interests in biomedical, computer, robotics, and aerospace engineering. One thing is for sure, I will always seek to find new solutions to issues in the world.

How are you enjoying U of T so far?

The upper years talk about the bond between engineering students, and it already feels true. It’s very easy to make friends. It’s also been very interesting to come to U of T and the Faculty of Applied Science & Engineering from a high school that was new because U of T has so much tradition. You walk onto campus and see an iconic building like University College, and then you turn around and see the CN Tower – it’s such a different community and I’m looking forward to being a part of it.