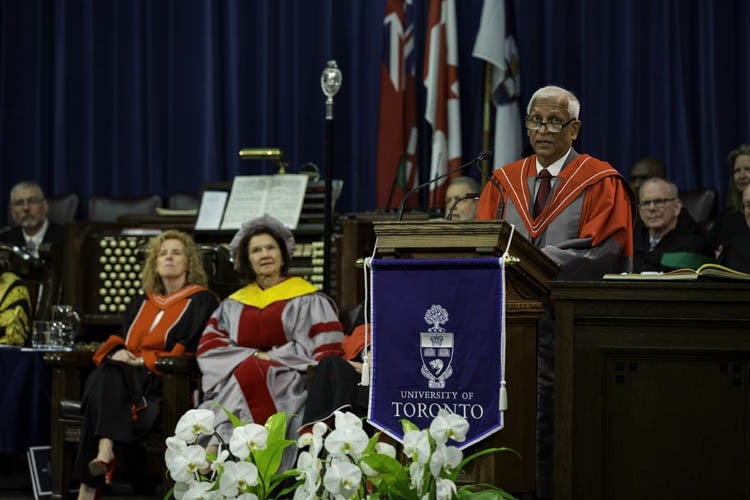 M.G. Venkatesh Mannar is not a household name. But it should be.

Born into a fifth-generation salt producing family in India, this chemical engineer and food technologist has spent close to four decades working in developing countries around the world to help put an end to malnutrition and micronutrient deficiency.

Humble table salt, as it turns out, is a cheap and effective delivery method to get minute quantities of much-needed micronutrients like iodine into the diets of men, women and children.

Introduced in the United States and Switzerland after the First World War, iodized salt has dramatically decreased incidents of goiter and cretinism, which results in development delays and other health problems. Iodized salt has even boosted the IQ and height of modern-day populations.

Since the 1970s, Mannar has been the principal architect of the global salt iodization program now reaching nearly five billion people through his work with UNICEF, the World Health Organization, World Bank and the Canadian International Development Agency. This program has led to a dramatic reduction in iodine deficiency disorders across the world.

But why stop there? Mannar is working with a team at the University of Toronto to infuse salt with other nutrients such as vitamin B12, folic acid, iron and zinc. He also sees fortified tea as another way to thwart nutrition. Anemia in Africa and southeast Asia — he’s coming for you, too!

Today, the University of Toronto will recognize his career with a Doctor of Science, honoris causa.

“Mannar is like the Energizer Bunny,” says Professor Levente Diosady of U of T’s Department of Chemical Engineering and Applied Chemistry, who has worked with him since 1990. “He really is tireless. He just doesn’t stop.”

When he was president of the Ottawa-based Micronutrient Initiative, Mannar was on planes travelling 250 to 300 days out of the year in support of projects that are reaching 500 million people a day, Diosady recalls. And he’ll go anywhere where he thinks he can make a difference, with the tales to prove it. He’s travelled on cargo planes to North Korea and been chased across the river in Congo when he had passport problems.

“He has this desire to do good things... and he’s a very effective spokesperson,” Diosady says. When then-Prime Minister Stephen Harper hosted an international meeting on maternal heath in 2011, there were health ministers from at least 20 different countries in attendance — and “all of them went up to Venkatesh and said hello. They all knew him.”

Humbled and honoured by the recognition from U of T, Mannar is clearly excited about all the ways cutting-edge research and technology can be adapted and scaled up in real world situations.

“The horizons are just limitless today [for new graduates]... It’s a really excellent time to be innovative” says Mannar, who is officially retired but still hard at work on several major projects as an adjunct professor at U of T.

“There is no single predetermined career path for you. There is no limit to mix and match your skill sets and what you can do. And there are no rules requiring that you stay on one career trajectory.”

It’s critical for them to think globally, challenge the status quo and be flexible. Be like the bumble bee, Mannar says. The fact it can fly makes no sense when you consider the ratio of its wing span to its body weight.

“But the bumble bee doesn’t know this and goes ahead and flies anyway!”

And, when it comes to working in the developing world, put aside your stereotypes of how things should work and embrace the reality of being in a place where technology leaps ahead rapidly. In fact, it often skips steps because infrastructure or government restrictions aren’t in place, Mannar points out. Look at the rise of Uber in Asia — they haven’t fought it, they’ve embraced it because it filled a need — or the fact in many African countries it’s easy to transfer funds via cellphone — something Canadians have yet to fully embrace.

“There is no concept or model that cannot be challenged. There are no geographic boundaries to where you work or how you work. There is no point at which we stop learning. New ideas are sprouting every day — you never know which of these ideas might fit right into your own goal and vision.”

M.G. Venkatesh Mannar spoke today at the 10 a.m. ceremony for graduands from the Faculty of Applied Science and Engineering. A video of his speech can bee seen below and on U of T’s YouTube channel.