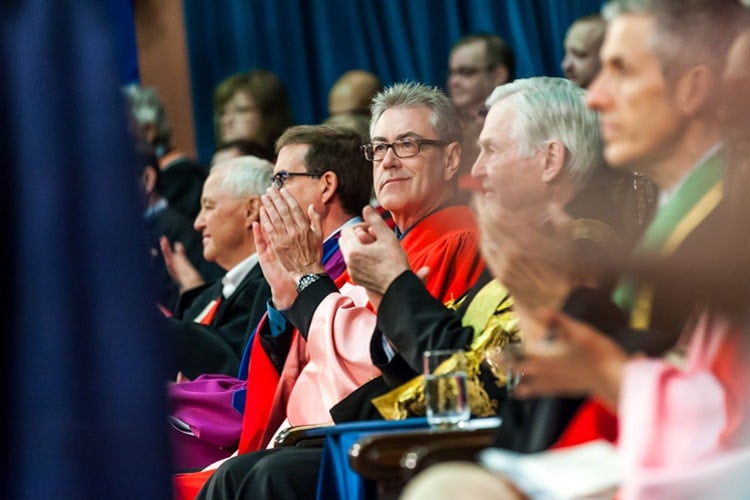 The man in charge of one of the world’s most important film festivals is thrilled to receive an honorary degree from the University of Toronto, which he says played a pivotal role in helping launch the filmmaking industry in English Canada.

Norman Jewison. David Cronenberg. Atom Egoyan. Don Owen. All huge names in Canadian cinema and all were shaped by their experiences as students at U of T, Piers Handling told fellow graduates in a rousing speech today.

The connection even extends to the brutalist architecture of the University of Toronto Scarborough having its close up in two Cronenberg features: 1969’s Stereo and 1970’s Crimes of the Future. He really started something since the location continues to draw TV and film crews to this day.

It’s an honour to be celebrated in my home city and “to feel I am a part of this illustrious cinematic history” at U of T, said Handling, who described himself as a self-educated cinephile who craves intelligent, kinetic films.

The director and chief executive officer of TIFF, the Toronto International Film Festival, since 1994 was recognized with a Doctor of Laws, honoris causa for his work transforming the way people see the world through film and in placing Hollywood North on the map as the place to premiere the biggest and best new films from just down the street and around the world.

In his convocation address, Handling said he’s also been honoured with the Chevalier des Arts et des Lettres, France’s highest cultural insignia. “Don’t you love the French?” he joked with the audience of new graduates and proud parents, adding he was sure to ask them if any rights or privileges came with the honour.

“They said I can ride a horse into any church in France. I haven’t actually done it yet... but I look forward to the rights and privileges that come from today’s honour.”

Later in the day at an intimate Q&A with a group of 20 film studies students at Innis College, Handling explained the true purpose of the festival, which now has a $44-million annual operating budget and employs 200 full-time staff in its 40th year. “We’re trying to create a more informed citizenry and ultimately a more curious one.”

When asked how he selects films for the film festival, he said he can tell “in the first five minutes the first three shots” if the filmmaker has hit the mark.

“You can feel the authority of the filmmaker also immediately,” he said, adding that commitment, passion, imagination and creativity are key.The festival is put together in three months but first he and other selection committee members must plow through an estimated 5,000 films before determining their roster. Many of those films are unsolicited, just like Michael Moore’s seminal film Roger & Me was back in 1989.

“He made it clear. He had a movie,” Handling recalled. “He was a brilliant marketer. He’s a talker, he’s a charmer and he clearly has a point of view.”

That movie made it into the festival because of a call he made to a 21-year-old student on contract for the summer in their office. That call led to a word of mouth campaign that made everyone want to see it, Handling said.

Squeezed in between film screenings and attending other film festivals around the globe, Handling told his fellow graduates that he and his partner, Federica, recently travelled to Europe to help as unattached volunteers in Syrian refugee camps along the Greek-Macedonian border.

“We were in two camps and the experience was in a word: humbling,” he said. More than 250,000 people have been killed in the Syrian conflict and five million more have fled “travelling towards the beacon of Europe.

“We’ve both been processing our experience since our return. They were living in appalling conditions... but their spirit and resilience were truly uplifting.”

Many of their fellow volunteers were “people of your age, people like you.” And although the problems of the world seem insurmountable, like the current refugee crisis, “collectively, the volunteers were making a difference. The camps couldn’t survive with them.”

The world in 2016 is an unsettled place that’s under extreme pressure and it’s easy to be overwhelmed and want to block everything out. But that uncertainty shouldn’t be something that frightens you, you should embrace it, he said.

“You do not know your own power. Start believing in it... We need the best parts of you,” Handling said. “You have received a privileged education. What you make of that experience will mark this country and quite possibly the planet.”

Piers Handling spoke at the 10 a.m. ceremony for graduands from the Joseph L. Rotman School of Management and School of Graduate Studies. A video of his speech is available on U of T’s YouTube channel.