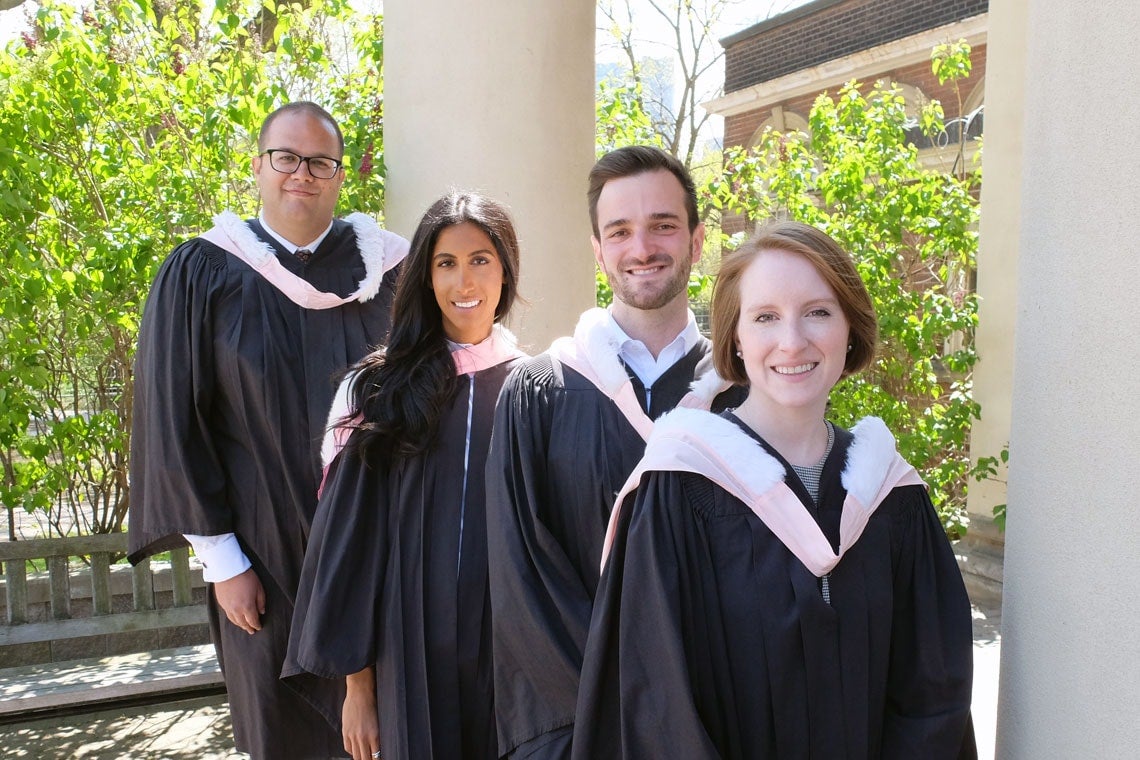 After three years of law school – four for those in certain programs – the Faculty of Law's Class of 2016 is ready to celebrate and begin their legal careers.

“I stared at the email with my final paper attached for about five minutes, thinking: ‘Can law school really be over when I click send?’,” said Aron Nimani. “The answer was a simple ‘Yes,’ which only added to that surreal feeling.”

For Kellie Mildren, it was dreamlike.

“Like floating. I walked to school, for the first time, to the year-end BBQ – because why not? It was beautiful outside, and I was no longer in a perpetual rush. I suddenly had time to call my parents, to make plans to see neglected friends, to read the novels on my bedside table.”

Krupa Kotecha said she felt a range of emotions: “Handing in my last paper of law school was both very exciting and sad at the same time. It was somewhat surreal given the tremendous academic, professional, and personal journey I have undergone since writing my first paper in 1L!"

Neil Abraham knows about journeys. He returned to school to pursue law after working most recently as an environmental economist for the federal government. That’s after he was a health economist for the government of Nova Scotia while in graduate school.

“I was nervous coming back to school because I had been working for many years and it was daunting to quit my job for something unknown,” said Abraham. “Luckily, I loved it right away and the choice to switch careers turned out to be a smart one for me.”  He’ll be clerking at the Federal Court of Appeal, and then for Chief Justice Beverley McLachlin at the Supreme Court of Canada. “After that I hope to join a litigation practice dealing primarily in public law.”

Nimani says he looks forward to spending a few weeks reconnecting with friends and family on the West coast after bar exams, before returning to Toronto to article at a Bay St. firm in August.  Looking back, he said law school was “a roller coaster of highs and lows unlike almost anything I had ever experienced. Although there are some things I would do differently if I could go back, I would still end up here now, finishing my degree and looking forward to the next step.”

Mildren, who will be articling in-house at Bird Construction, one of Canada’s largest national general contractors, says the most memorable things about law school “have been instances where professors, friends and family have gone above and beyond.”

She added: “Professor Trebilcock has edited and provided feedback on a paper of mine – three times – from Collingwood (he even made comments on the footnotes). Professor Langille provided immediate responses to emails, even if he was at a family function in Nova Scotia, or your email was a 40-page article that he now has to read. I have had people provide feedback on my essays before deadlines when I can no longer think straight (including [my friend] Michelle, who read 80 pages, and my mom, who clocked in for a 4:00 am emergency). Then there is my dad, my step mom and my boyfriend, who have not only been my inspiration, but who have been my rock for the last three years. I was the recipient of so much generosity during my time at U of T, and it is that which will leave the biggest mark.”

Kotecha, who is set to article at McCarthy Tétrault, where she worked last summer, said law school “far exceeded my expectations; I could never have anticipated the extent of my professors’ commitment to student learning, the breadth of the school’s academic and extracurricular offerings, or the sheer genius of my peers. The culmination of these factors resulted in an incredibly inspirational and dynamic learning environment – one that I feel very grateful to have been a part of.”

Nimani called his classmates “incredible” and said the end-of-year 1L party was one of his favourite law school memories: “When everyone celebrated being done that first big hurdle. It was such a weight lifted, and the exhilaration hasn't been matched since.”

It’s no secret the law school years can be so formative, particularly when it comes to life-long friendships. Kotecha said she knows “our friendships will continue to develop beyond graduation and as we move through our careers…The friends I have made in law school are some of the sharpest, funniest, and most driven individuals I know. It is amazing to have a group of people with whom I share so much common ground.”

Abraham said it didn’t take long to connect here with other students who were shifting careers, just like he was. “I found my pod of other ‘second-career law students,’ as we're called, and it's been great getting to know each other and learning about how people from all different backgrounds come to law school and bring different perspectives to the law.  I'm also constantly impressed by my younger law school friends who are miles ahead of where I was in my early twenties! Gaining these formative friendships has been a great aspect of law school.”

His favourite memory?  “Going to the SCC to hear arguments I helped prepare be presented in court, in the case Henry v BC.  I also took a course with Justice Robert Sharpe that gave me a great opportunity to learn about how judges think about the law.”

Three years have come and gone; a lifetime awaits ahead.

Said Mildren: “Every day I feel privileged to have been here.”