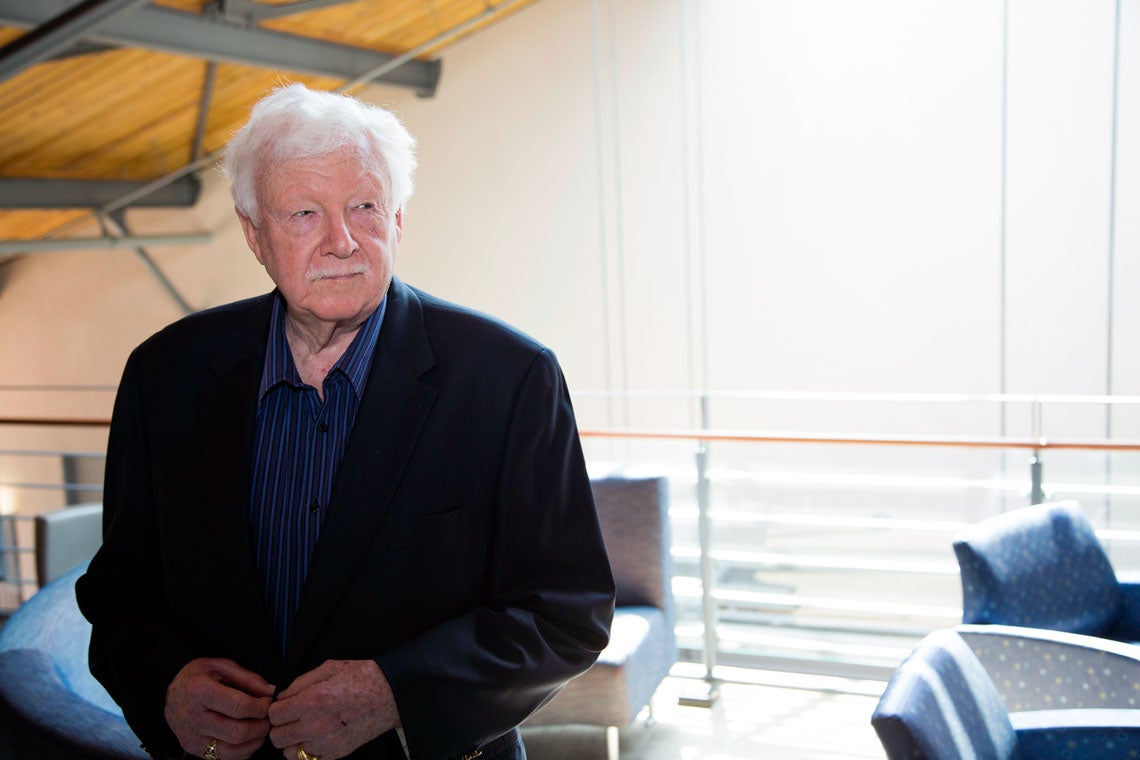 Clive Davies reflects on his honours BA in history: “I wanted my dad to be proud of me. He certainly would be now." (Johnny Guatto photo)

He's been a London bobby, Pinkerton agent, cab driver, cop and a dog show judge – now he's a U of T grad

“If I had it to do over again,” says Clive Davies, who graduates on June 10, “I would probably spend more time on the Balkans. There are a lot of educated people there who have suffered in the past because of the political situation and who are now finding opportunities to distinguish themselves. These people I really would like to know.”

Otherwise, the British-born history specialist has no regrets after pursuing a U of T degree program over 39 years – a stretch of time that includes what Davies calls “a 25-year sabbatical.”

Read more about Davies in Metro

Read the Toronto Sun on Davies

At 79, Davies is the clear doyen of the class of 2016 and 59 years older than his youngest classmates. He met U of T News in the Kruger Hall Commons of Woodsworth College – named after Arthur Kruger, the Professor Emeritus of economics whose second term as principal was approved by a committee that included Davies, then president of the Woodsworth student council.

“It was unanimous,” Davies recalled. “I don’t think we considered anyone else.”

As lengthy as Davies’s undergraduate journey has been, it started as he approached middle age, in 1977. By this time he was established in the Toronto Police Service as commander of the special weapons team.

“Kind of high-profile stuff,” Davies said in a gentle but unmistakable English accent. “There was a lot of romanticism attached to SWAT teams.

But Davies regards a record of no casualties or serious injuries as the real distinction of his special weapons years. “I am very proud of that,” he said.

Even before this his resumé was unusual. Raised partly in Venezuela, where his father worked as a welder for Shell Oil, Davies also spent time on a Barbados plantation and in Singapore with the Royal Air Force.

“I knew they were going to grab me,” Davies said of his decision to enlist in 1956 before being called up.

Mustered out, Davies worked four happy years as a police officer the City of London – a bobby, as they were known then and are still known.

“Mostly traffic duty,” Davies recalled. “There were only about 5,000 residents at night, and over a million during the day. That meant that the shift work was during the day, which was ideal.”

Davies’s debut job in Toronto in 1964 was as a taxi driver. His first fare asked to be taken to Eaton’s – of which he had never heard.

“But I survived,” Davies said. “I carried a suitcase with a suit, shirt and tie. If I heard of a job, I went into a restaurant washroom, dressed up, banged on the door and got in an application.”

Security work with Pinkerton (where he was head of personnel) led to a successful return to police work in 1967. The Toronto force paid for his fees at U of T, which he entered through a pre-university program.

(See a short clip of the U of T News interview with Davies below; the full-length version will be posted after he graduates June 10.)

His decision to enter university was inspired by his father.

“My father was a fine man, a man of great integrity, with a great respect for learning and books,” Davies said.

“He spent a lot of money on my education, which I did not take advantage of. It was probably a bit of a guilt trip. I wanted my dad to be proud of me.

“He certainly would be now. I am the first in the family to have any post-secondary education.”

Not that the clan lacked learning. Davies’s great-grandfather was a librarian in the Lancashire town of Oldham. “There is a love of books coming down the line,” he said.

While the U of T career started well, it eventually became apparent to Davies that shift work and a regular academic schedule could not coexist. Sometimes Davies was forced to attend class in uniform.

Read a CBC story about Davies

And by the early 1980s another avocation had started to make inroads on his schedule: dog breeding. Davies is an authority on standard Schnauzers and Norfolk Terriers and indeed was the first Canadian breeder licensed to judge the former breed.

“I hate to be immodest, but if you go to pretty well any dog show in the world, you’ll find somebody who knows me,” Davies said. One reason for his renommé in the dog world his work as a writer for such widely-consulted journals as Dogs in Review.

His background in writing – police work, Davies reminds us, involves writing reports – stood him in good stead in 2004, when he decided to return to Woodsworth and the study of European history.

Rather than settle for the few credits he needed for the basic BA he had started so many years earlier, Davies opted to pursue an Honours Bachelor of Arts.

He has a high regard for the professors and teaching assistants he met along the way.

“If there were times when I felt a little lost, they were always there for me,” Davies said. “That was the beautiful thing about U of T.”

The difference between then and now is illustrated by HIS 310, which he took in the 1970s with Bill Callaghan, the chairman of the history department.

“We met in his office,” Davies recalled. “It was a very cohesive little class of six or seven people.

“The only problem was that Professor Callaghan smoked cigars. This was at a time when the consternation about second-hand smoke was not prevalent.”

One memorable professor in the second stage of his studies was Dennis Smyth.

“Kind of an irascible Irishman,” Davies said. “Big Rugby Union fan. Did his PhD at Cambridge under one of the people who worked on the Enigma program, so he was very well versed in that aspect of World War II. He was a great encouragement.”

As were his much younger classmates, a few of whom Davies counts as friends.

“I had no problems,” Davies said. “Obviously not all students thought I should be there. And sometimes I wondered myself whether I was keeping some kid out of school. But I feel that I have earned my way.”

Today, Davies and his wife Mary live in the north-of-Toronto community of Tottenham. (North York, where he used to live, imposes a three-dog limit.)

Mary has broken her shoulder and unfortunately will not be able to attend – but Professor Emeritus Robert Taylor will robe Davies prior to Convocation. Davies met the former head of the French department through his wife, whom Davies once interviewed as part of a break-in investigation.

If Davies is easily recognized on June 10 by his white hair, he will have no problem stepping up to the stage.

“I have no replacement parts except the lenses in my eyes,” he said. “Everything is pretty much original.”