Unsung gene is key to how antibodies develop: U of T study Researchers in the lab of Alberto Martin, a professor of immunology in U of T’s Temerty Faculty of Medicine, discovered an overlooked gene that plays a major role in the development of antibodies (photo by Julia Soudat)

Researchers at the University of Toronto have discovered that an overlooked gene plays a major role in the development of antibodies, which help the immune system recognize and fight viruses including SARS-CoV-2, bacteria and other causes of infectious disease.

The gene – FAM72A – facilitates production of high-quality antibodies by enabling the effect of an enzyme called AID (Activation-Induced Deaminase), the researchers showed. Immunologists have known for two decades that AID is essential to produce antibodies capable of clearing infections, but the full mechanism of its effect had remained unknown.

“Our findings answer the long-standing question of how AID does its work,” says Alberto Martin, a professor of immunology in U of T’s Temerty Faculty of Medicine. “FAM72A helps AID to promote mutations in antibody genes that are essential for the development of effective antibodies.”

The journal Nature published the findings this week, back-to-back with similar results from a research group in France.

Genetic mutations that lead to lasting changes in DNA occur through a process called mutagenesis. In the context of antibody development, mutagenesis unfolds largely through the AID-driven mechanisms called somatic hypermutation and class-switch recombination – both of which help antibodies gain the diversity and potency they need to counter a wide range of pathogens.

The results from the Martin lab should help researchers better understand antibody development broadly, but they also have implications for cancer. Uncontrolled mutagenesis in B cells that produce antibodies is linked to B-cell lymphoma, and FAM72A is present at very high levels in other cancers such as gastrointestinal, breast, lung, liver and ovarian cancers. 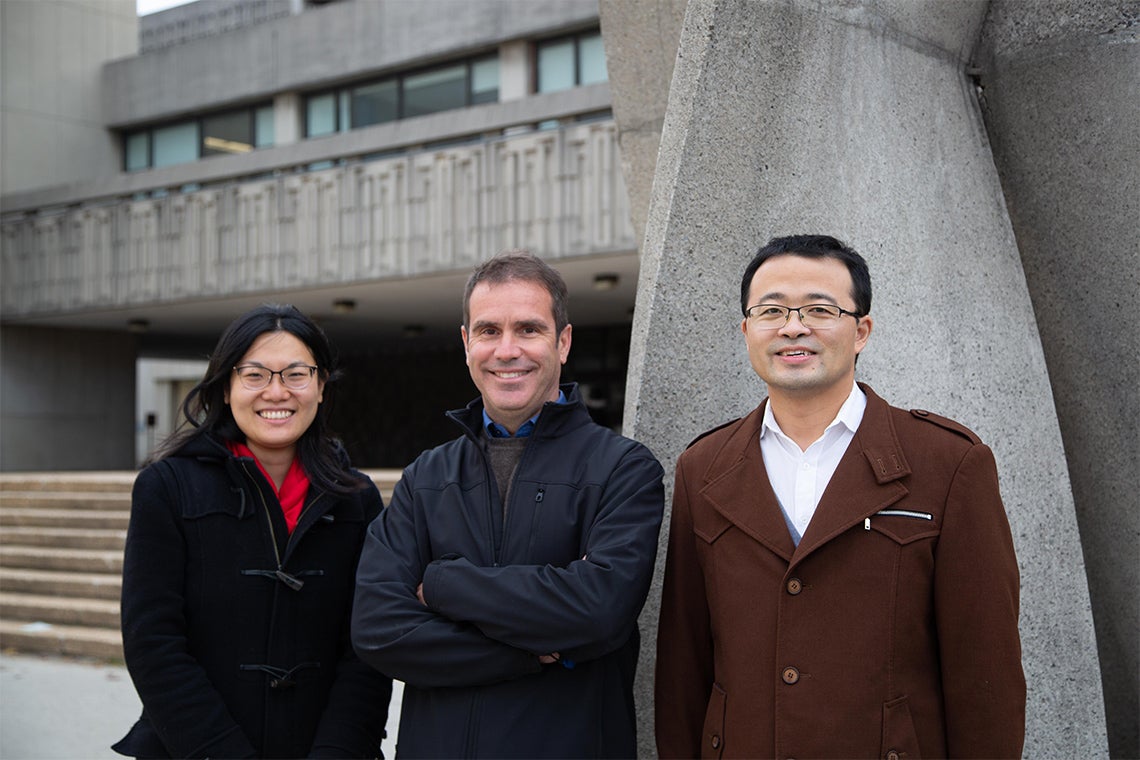 Martin’s team is now exploring those possibilities. Intriguingly, unlike other mammals, humans have four gene versions of FAM72A and their roles in cancer and antibody production are still unknown.

Yuqing Feng, a post-doctoral researcher in Martin’s lab, first identified FAM72A as a gene of interest through a genetic screen. She conducted the screen with technology designed by Jason Moffat, a professor in U of T’s department of molecular genetics and the Donnelly Centre for Cellular and Biomolecular Research.

“The platform is a very powerful tool to uncover new genes, and Jason’s group provided valuable advice on design and execution of the screen,” Feng says.

The platform generated a short-list of genes with mostly known functions that might play a role in B-cell mutagenesis, but Feng says she was more interested in the poorly characterized genes on the list.

FAM72A stood out in part because so little was known about its biology.

“I had read a paper from 2008 that suggested FAM72A binds with UNG2, but with no apparent functional consequence. This was interesting because we knew that UNG2 was important in the pathways that we were studying,” Feng says.

That connection turned out to be a great lead. Feng was able to show in experiments with B cells that FAM72A binds to and causes the destruction of UNG2, thereby enabling mutagenesis.

Conglei Li, another post-doctoral researcher in the Martin lab, replicated those results in mice. “We generated knockout mice deficient in FAM72A, and observed that they had a compromised antibody response,” says Li, who will launch his own lab at the Chinese University of Hong Kong next month.

Li also showed that when UNG2 is hyperactive, it can undermine the beneficial effect of AID.

Li says he is grateful the lab could continue to work together throughout the COVID-19 pandemic.

“Our team overcame so many hardships to continue this work during the pandemic, from reduced animal colonies to self-isolation then limited hours in the lab and shift work,” Feng says. “We’re really passionate about our work, and by working together, we did not let COVID stop us.”