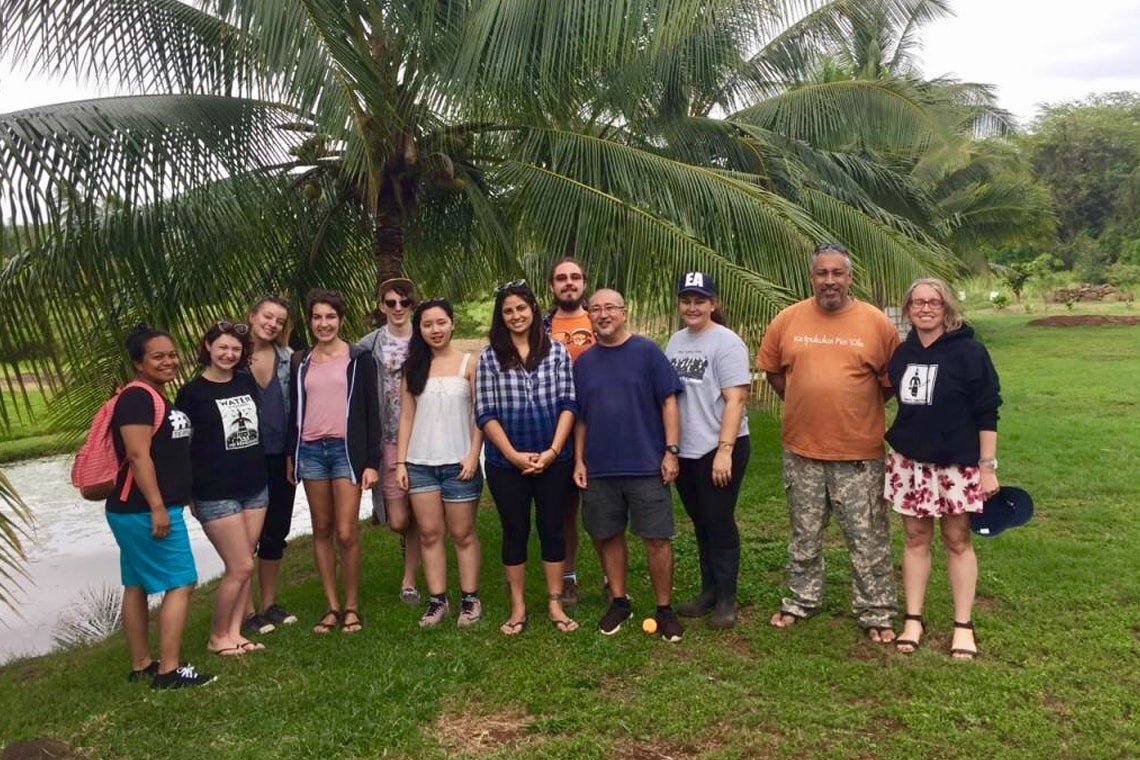 For Associate Professor of Anthropology Bonnie McElhinny and six University of Toronto students, Hawaii became a learning lab for multiculturalism and decolonization strategies.

They removed invasive California grass from one of the island’s bays, spent time on a farm where owners were restoring the land ecologically under Indigenous stewardship, restored mounds of taro plants eroded by rain and carved a peace canoe at a housing project that was experiencing racial conflict.

Mindful of U of T’s recommendations for more land-based education, McElhinny organized the trip in collaboration with the University of Hawaii at Mānoa (UHM), which is recognized for its programs in Indigenous sovereignty, ecological restoration and food security.

“Invasive species are a useful metaphor,” McElhinny said. “We need to identify what will flourish alongside other species without hurting them. As you decolonize, you determine which actions are toxic to the land and people and look for ways to restore reciprocity and the right relationships.”

The study trip, part of McElhinny’s Diversity: Critical Perspectives on Multiculturalism and Settler Colonialism course, is particularly relevant in light of Canada’s Truth and Reconciliation Commission’s final report and the University of Toronto’s response.

“It’s important to think about how you break down the boundaries of classrooms and learn what it means to be on Indigenous territory in a multicultural city,” said McElhinny, who teaches anthropology, and women and gender studies in the Faculty of Arts & Science.

She says that UHM “is working at building meaningful linkages with the Indigenous community in a respectful way, something that is more developed there.”

McElhinny’s course invited students to consider new perspectives and approaches as they deepen their understanding of settler colonialism – the phenomena in which conquerors of lands and people see themselves as native to the property and entitled to the land, resources and original inhabitants.

The students also toured various sites affected by the United States’ major military presence in Hawaii and took part in a conference with UHM students to discuss both Canadian and Hawaiian ecological and Indigenous issues. The students will be presenting papers based on their experiences to their classmates at U of T and in the undergraduate research fair to share their knowledge.

Matthew Johnstone, a third-year undergrad majoring in social and cultural anthropology, was so taken with Hawaiian culture that he plans to return there for his PhD studies. He has begun to study the Hawaiian language in preparation.

“I have been looking for a focus for my future research,” he said, “and when we explored Hawaii, it just felt right.”

Amanda Harvey-Sánchez, a third-year undergrad majoring in social and cultural anthropology, said Hawaiian culture teaches that everyone has a responsibility and a calling that he/she should be looking to fulfill. The experience led her to wonder “how do we decolonize academia by combining practice and theory to create something positive?”

For Madison Laurin, a fourth-year undergrad in social and cultural anthropology, it was the civic engagement involved in the ecology projects that resonated most strongly.

“I’m wondering how we can make civic engagement more available to U of T students,” she said. “The wheels are turning.”

The undergraduate trip to Hawaii was supported by the International Course Module (ICM) program in the Faculty of Arts & Science. The program provides students with direct exposure to the international phenomena they are studying in their courses.