Humility, responsibility and opportunity: U of T responds to the final TRC Steering Committee report 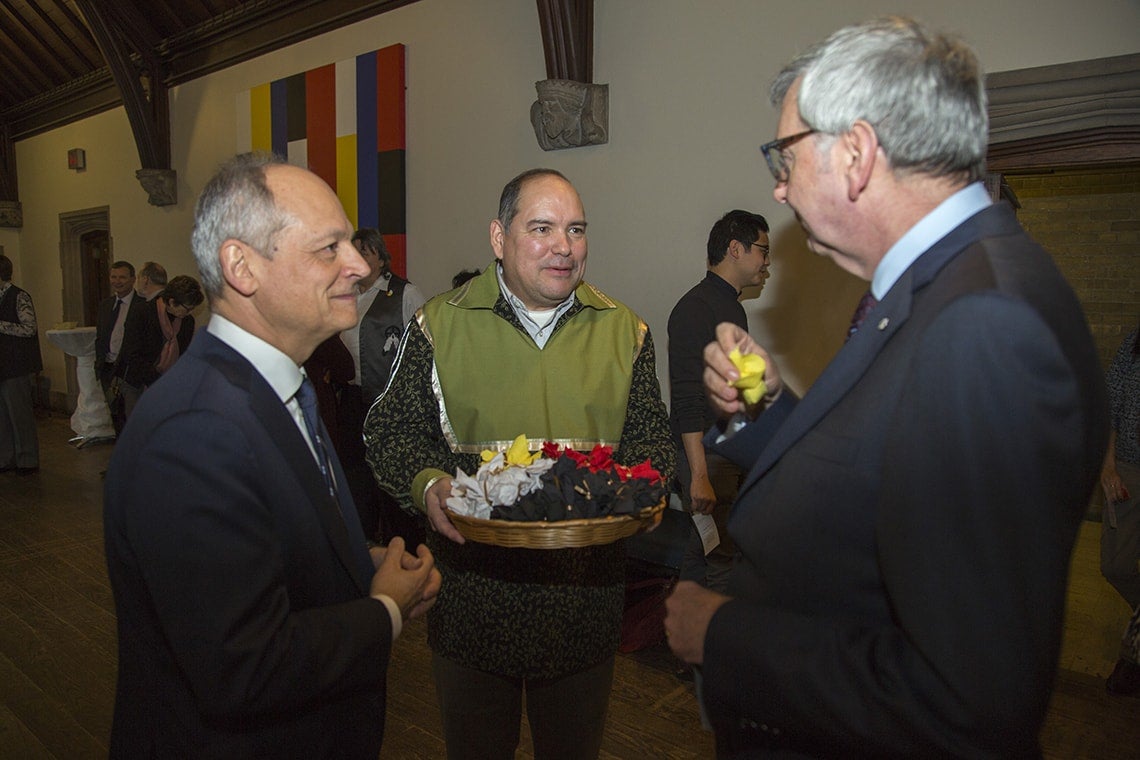 The University of Toronto “acknowledges responsibility in contributing to the plight of Indigenous peoples” and is taking its first steps in the process of reconciliation, says President Meric Gertler.

“In acknowledging the truth, the university community embraces the opportunity – and indeed its responsibility – to join with Indigenous communities in the collective process of reconciliation,” he said.

He made the comments as part of his joint response with Vice-President and Provost Cheryl Regehr on Feb. 16 to the report of U of T’s Truth and Reconciliation Commission Steering Committee. That report was submitted to the provost and president on Jan. 13 in an entrustment ceremony.

Read more about the report

Both the provost and the president expressed deep gratitude to the members of the Steering Committee for their hard work and expertise in dealing with “complex, difficult and emotional” questions and the responsibility of the university.

“The Committee’s report does not flinch in its account of this responsibility: by noting how the University was complicit in the oppression of Indigenous peoples, it is a difficult and demanding document,” Regehr said. “Yet at the same time, the report is also a strikingly optimistic and constructive document.

“Reaching this balance is a remarkable achievement, and it is the foundation upon which the truth and reconciliation process is based.”

The response of the president and provost, “Humility, Responsibility, Opportunity: In Response to the Report of the University of Toronto’s Truth and Reconciliation Commission Steering Committee,” outlines the beginning steps the university is taking to respond to the Steering Committee's 34 calls to action.

Building capacity is essential for the university’s reconciliation efforts, the response states.

“The committee’s report noted – repeatedly – both that Indigenous members of our community must be more involved in decision-making at every level and that the Indigenous community at the University is too small and, consequently, overextended,” President Gertler said. “This is a dilemma that can be resolved only by building capacity.”

As part of this year’s budget planning process, the president said, the university will commit additional resources directly towards hiring more Indigenous faculty and staff, while simultaneously bolstering efforts to recruit Indigenous students.

“This initiative is overdue and will commence soon through discussions between divisions and central leadership to determine how to proceed,” he said.

The appointment of a new Director of Indigenous Initiatives with a mandate to coordinate, advise, collaborate and liaise with academic and non-academic communities to address the Steering Committee’s calls to action, is another important step in building capacity, Regehr said.

The president and provost said they will consult with members of the Steering Committee and others as they initiate the search for the Director.

The Steering Committee's report must inform conversations with principals, deans, chairs, vice-presidents, and other leaders both academic and administrative throughout the expansive campus community, the response states.

“We would like to reiterate our gratitude to the Steering Committee and all of those who have participated, and all those who will participate, in the process of truth and reconciliation at the University of Toronto,” the response concludes.

“Education and research are among humanity’s greatest forces for good. The University of Toronto is therefore uniquely placed, with a special responsibility to acknowledge the truth and to foster reconciliation. We commit to doing so.”