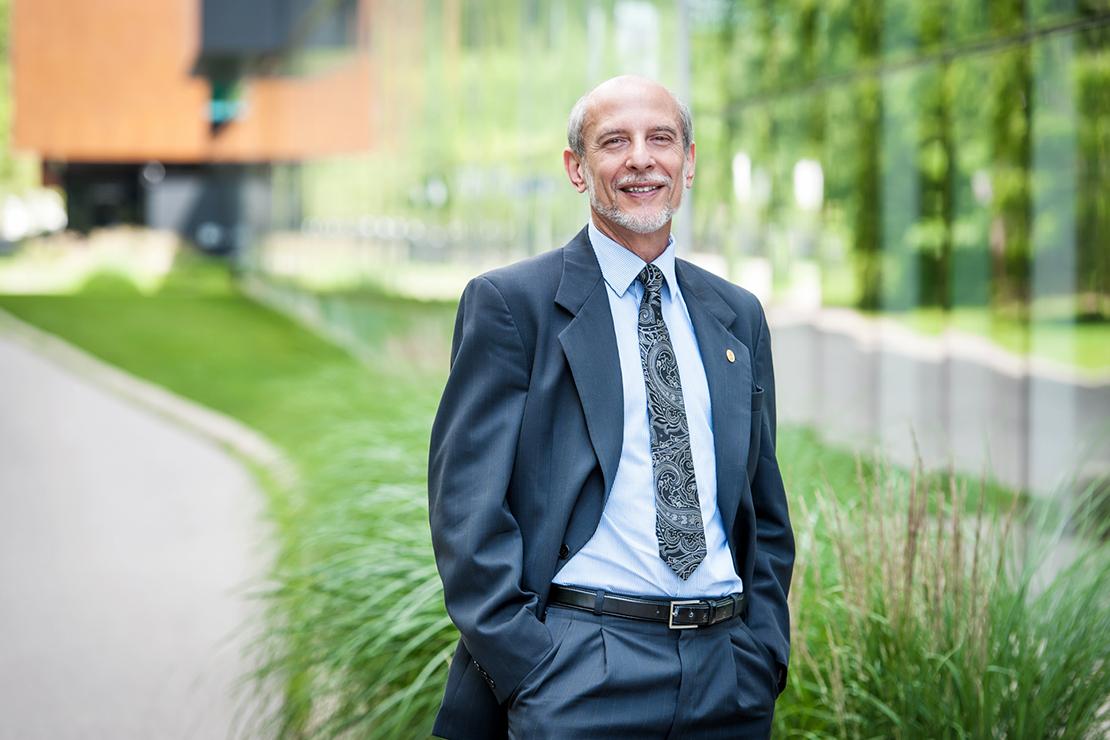 Ask Ulli Krull how it all got started – the programs, buildings, research, partnerships and city-building that defined his nearly 40-year career at the University of Toronto Mississauga – and he breaks into a grin.

But as he turns everything over to the new principal and vice-president, he's keen to share the story of one moment that he considers a turning point in his career – and in U of T Mississauga’s relationship with the City of Mississauga. 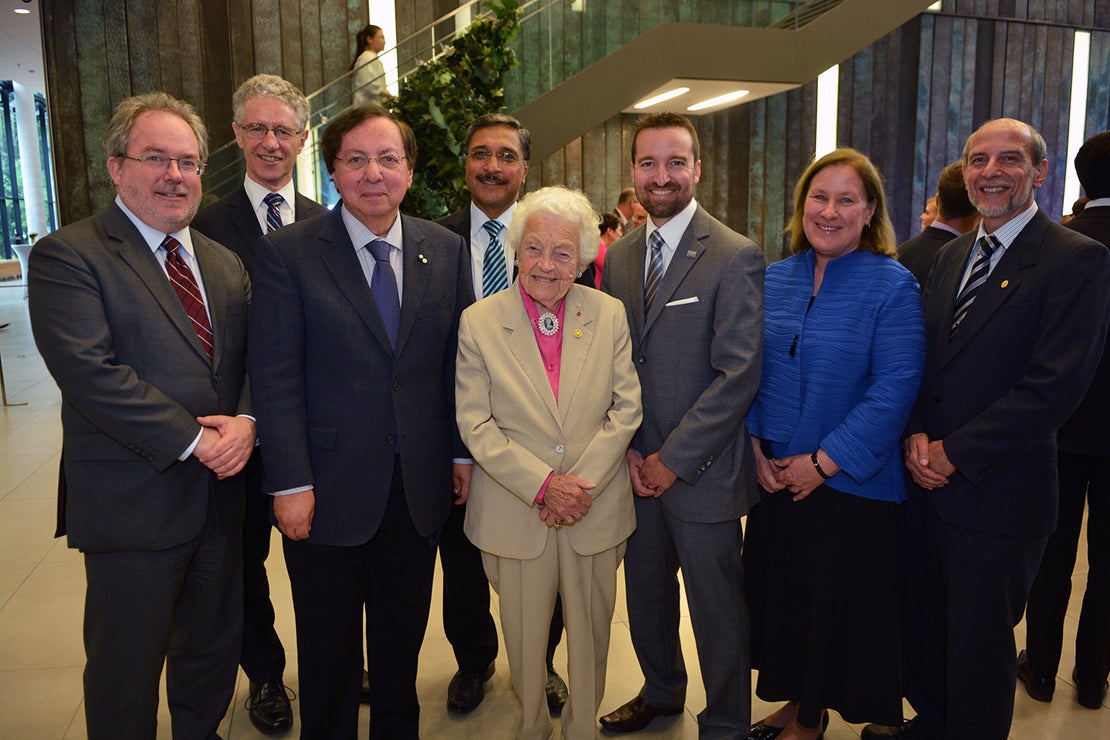 It was the late 1990s and Hazel McCallion, then the mayor of Mississauga, was on a flight home from Kobe, Japan, where she had met with representatives of the World Health Organization’s Kobe Centre, Cities and Health Program to talk about creating a made-in-Mississauga “Healthy City” model. McCallion found herself sitting next to a faculty member from U of T Mississauga's management department.

“She told him go back to campus and ask how we were going to help change the city,” Krull says.

It was a challenge custom-made for Krull, then the associate dean of sciences. “I knew immediately the team I wanted to bring together. We were going to teach Hazel how to build a healthy city while moving our academic work into the community in a way that had never been done before,” he recalls.

Krull made the project an assignment in an undergraduate course. He tasked 44 students with identifying how every city department could have an impact on health, and then sent them to city hall to flesh out the details. Their recommendations became a comprehensive report for the mayor, which led to a student presentation to the World Health Organization and, ultimately, to the formation of the UTM-City of Mississauga Healthy City Stewardship Centre. In 2006, the centre was awarded the World Leadership Award honouring exceptional leadership in cities around the world.

That, says McCallion, “is when Ulli became a vital part of the success of the City of Mississauga.”

Krull describes himself as a “lucky guy,” but his city-building role had nothing to do with luck. From the moment of his arrival on U of T Mississauga’s campus in 1984, he had a plan and he saw the University of Toronto campus, known then as Erindale College, as the ideal place to bring it to fruition.

A three-time U of T graduate, Krull earned his Bachelor of Science (1979), Master of Science (1980) and PhD (1983) degrees in analytical chemistry on the St. George campus. While still a doctoral candidate, his ground-breaking research on artificial cell membranes attracted industry attention – and a large federal research grant.

“All of a sudden, I had all this money, but not enough space to conduct my research,” he remembers. He started looking for a place to expand around the same time that two Erindale chemistry professors transferred to the St. George campus.

Krull jumped at the opportunity and, in 1984, he became the campus’s sole analytical chemist.

Over the next five years, he threw himself into research and teaching, outfitting his laboratory, recruiting students, publishing research and navigating the complex world of intellectual property and patents. As he ticked off each academic milestone, including a two-year stint as chair of the department of chemistry from 1990 to 1992, he started thinking about his next big thing.

“I started looking beyond campus to the city,” Krull says. He knew that innovation was a driver for positive change and that government and industry alike were eager for new ways to source innovative thinking.

But he also knew that he needed a launch pad, a project to prove that the future of U of T Mississauga and Mississauga were not mutually exclusive. That’s when McCallion came calling.

He also earned many teaching awards, while continuing to run a large research enterprise that has netted more than 250 publications, 60 book chapters, more than a dozen patents, four startup companies and two of the top awards for analytical chemistry research in Canada. Krull and his team are now harnessing the power of nanotechnology and microfluidics technology to detect disease markers and help make personalized medicine possible. He’s also exploring portable diagnostic techniques involving cellphones and their cameras.

Throughout it all, his passion for building something new – new partnerships, new research and learning opportunities for students and new ways of strengthening Mississauga’s economic and social fabric – steadily spurred him forward.

“Ulli Krull has played an absolutely crucial role in the development of U of T Mississauga as an anchor institution in the western GTA,” says U of T President Meric Gertler.

“He has this incredible passion for enhancing UTM’s role as a city-builder and for realizing its full potential as a centre of excellence in research and teaching. And that’s been a huge force in attracting brilliant faculty, staff and students to the campus.”

Krull was instrumental in the creation of the Centre for Applied Biosciences & Biotechnology, the Research Innovation Commercialization (RIC) Centre, the Mississauga Academy of Medicine, the Institute for Management & Innovation (IMI) and, most recently, U of T Mississauga’s robotics cluster program.

Philanthropist Terrence Donnelly, whose $12 million donation supported construction of U of T Mississauga’s Terrence Donnelly Health Sciences Complex that houses the Mississauga Academy of Medicine, notes the importance of Krull’s “unique brand of leadership.” He truly was key, says Donnelly, “in bridging the university with the community and creating the opportunity for me to invest in something that is making a tangible difference to Ontarians.”

“Ulli sparked the idea of connecting science to business in a way that is meaningful and creates real jobs and economic prosperity,” says Pam Banks, executive director of the RIC Centre, Peel region’s incubator for innovation and entrepreneurship. She credits Krull with helping to broker the relationships with industry, the municipalities, the region and the provincial government, that led to the establishment of the non-profit in 2008.

“Ulli’s a triple-threat. He brings to the table expertise in science, business and community-building,” she says. “You and I think about what might happen today or tomorrow. Ulli approaches life like a game of chess. He’s looking 15 years out.”

Ellen McGregor agrees. The CEO of Mississauga cleantech company Fielding Environmental, she worked alongside Krull on the city’s economic development advisory board and the Mississauga Innovation Leadership Alliance charged with developing a culture of innovation within the city.

“Ulli is highly principled and that makes him a leader in the community, someone people want to be around. He makes us feel there’s value in our contributions and that we’re a part of something bigger, something more than we could accomplish on our own.”

She points to U of T Mississauga’s Innovation Complex, unveiled in 2014 with a $10 million investment pledge from the city, then the largest municipal grant ever made to the university. The complex is home to IMI, a research and teaching hub dedicated to providing students with the sector-specific knowledge and leadership skills to manage innovation. Krull is credited as one of IMI’s chief architects.

Six years after its opening, the complex is a steady source of innovative ideas and future leaders for companies like Fielding. “Ulli understands better than most that to grow a business you need access to capital, talent, market and innovation,” McGregor says. Through IMI, “he makes sure that our company has access to talent, research studies, even lab space, so we can generate more revenue.”

Bonnie Brown, director of economic development for the City of Mississauga, has invited Krull to participate in countless investment pitches to life sciences companies thinking of setting up shop in the city. By painting a compelling picture of how the university can help fuel their talent pipeline, “Ulli has helped land many investments in Mississauga,” she says.

Alumna and Mississauga Mayor Bonnie Crombie says that both the city and U of T Mississauga are better because of his Krull's many contributions.

“Your drive to build the city and cultivate a vibrant innovative culture through your role in the launch of the Research Innovation and Commercialization Centre, the development of the Master of Biotechnology program, the Institute for Management & Innovation, the Centre for Medicinal Chemistry and the Continuum Robotics Laboratory, have all positioned UTM as a leading education and research partner (and) put us on the national and international map.”

As his tenure as principal and vice-president comes to an end, Krull says he's grateful for the many accolades, thank-you messages and stories of positive change he’s received.

Vice-President and Provost Cheryl Regehr says U of T has benefitted greatly from his passion and support for higher education as well as his intelligent and forward-thinking leadership. “His countless contributions have helped shape UTM into the diverse and thriving campus it is today. I am deeply grateful to Ulli for his remarkable service and unwavering commitment to those at UTM and to the broader community.”

Krull hopes his impact reaches even deeper. “I worked hard to meet everyone – students, faculty, staff, alumni, donors – where they are at, to talk to them personally and let them know that they can say or ask anything they want, no matter what their title.”

Paul Piunno, associate professor (teaching stream) in the department of chemical and physical sciences and one of Krull’s former graduate students, appreciated that approach. “Ulli always dangled a carrot in front. Here’s what you’ve learned. Now, how can you apply it to help the human condition? I’ve taken that to heart.”

His leadership was an example to those around him, says Heather Hines, director, undergraduate programs and student services in the department of management. “Despite his many responsibilities, Ulli always found time to connect with those in the community and unfailingly demonstrated his support, whether it be through attending a student awards ceremony, speaking to a staff mentorship forum, or even getting decked out in a Santa outfit for a good cause.”

Krull’s leadership style also resonated with both Felipe Nagata and Carol Bisnath, former presidents of the U of T Mississauga Students’ Union and the UTM Alumni Association, respectively.

“Ulli always gave students a voice while reminding us to work together and think about what comes next,” Nagata says. “He’d tell us, ‘We’re all in this together, so let’s get it together.’”

Bisnath remembers his openness and accessibility with the alumni board and with her personally. “Ulli is humble, strong, dignified and never afraid to show his humanity, not just to me, but to every person on campus. He has created a real sense of community.”

Krull’s smile stretches even wider at the thought.

“Helping everyone feel like they’re a part of a family, that they’re an important part of what makes UTM a special place, that’s been my goal all along.”