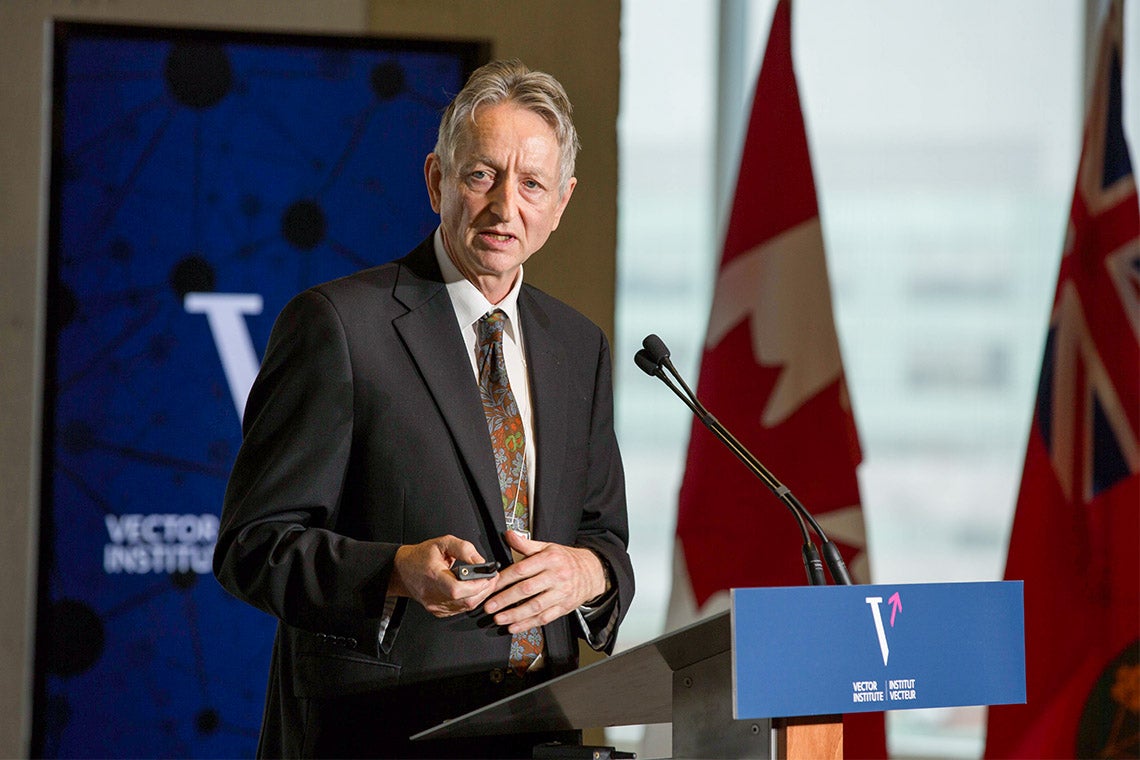 Geoffrey Hinton, a U of T University Professor Emeritus, and two other researchers earlier this year won a prestigious A.M. Turing Award for their pioneering work in the field of deep learning (photo by Lisa Lightbourn)

The positions were announced Wednesday as part of a Deep Learning Symposium organized by the Vector Institute for Artificial Intelligence, where Hinton is chief scientific adviser. Deep learning is a form of AI that uses neural networks, modelled on the network of neurons in the human brain, to learn and make decisions.

Hinton, who also works at Google and is sometimes referred to as the “godfather” of deep learning, is scheduled to deliver a lecture and take part in a fireside chat with former Google CEO Eric Schmidt at the event.

“Thanks in no small part to Professor Hinton’s work, the University of Toronto is today recognized as a global hub of AI research,” said U of T Vice-President and Vice-Provost Cheryl Regehr. “It’s only fitting that we pay tribute to his achievements, including the prestigious Turing Award, by re-doubling our efforts to bring the next generation of AI and machine learning talent to U of T.

“These new positions will help us serve the growing interest in AI among our students, prepare them for careers in this burgeoning field and further consolidate U of T’s position as a world-leading centre of research and excellence in AI.

"The integration of these faculty positions with the Vector Institute speaks to how the strength of U of T's partnership with Vector stands to strengthen both institutions and further innovation and knowledge in AI."

The creation of the new faculty positions come on the heels of a fresh round of co-hires at U of T and Vector. They include assistant professors Chris Maddison, one of Hinton’s former students, and Jakob Foerster. Both were recently undertaking doctoral studies at the University of Oxford.

The faculty members who eventually fill the positions will be eligible for nomination as CIFAR AI Chairs.

Vivek Goel, vice-president, research and innovation, and strategic initiatives, said the positions are designed to further fundamental work in deep learning as well as support applications in other fields of research and scholarship.

“Solving the world’s most complex problems requires cross-pollination between disciplines, which is why two of our new deep learning faculty positions have been set up to straddle computer science, engineering and medicine,” said Goel.

“Our new faculty hires will be engaging in research in deep learning in an environment rich with talented faculty and trainees in the field, while also contributing their expertise to the application of deep learning in fields where the technology promises to have a significant impact on Canada and the world.”

Hinton and colleagues introduced the breakthrough approach, based on a mechanism called backpropagation, in a seminal 1986 paper in the journal Nature.

Hinton and collaborators then built on the technology with an array of developments that helped usher in a machine learning revolution by enabling practical applications of deep learning in speech and image recognition, self-driving vehicles and other areas.

His work is widely recognized as having helped build U of T’s reputation as a hotbed of AI research and shape the Vector Institute’s vision of using AI to improve people’s lives and spark economic growth.